Fatty liver is a duck or goose is known as Foie Gras. But humans get it too. Here it’s known as fatty liver disease or non alcoholic steatohepatitis (NASH). How do we get NASH? It all comes down to what we eat. 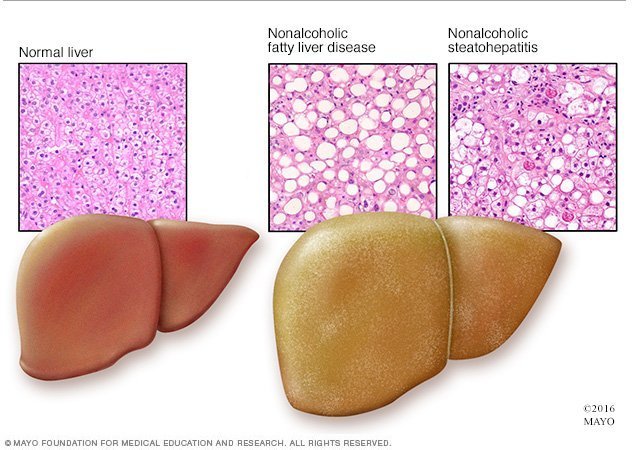 Dietary protein also raises insulin levels but not blood glucose by simultaneously raises other hormones such as glucagon and incretins. Dietary fats raise both blood glucose and insulin levels minimally. Absorption of fatty acids differs markedly from both amino acids and sugars. Amino acids and sugars are delivered through the intestinal bloodstream, known as the portal circulation, to the liver for processing. The liver requires insulin signaling for proper management of these incoming nutrients.

Fatty acids, on the other hand, are absorbed directly into lymphatic circulation subsequently emptying into the systemic circulation. These can then be used for energy or stored as body fat. Since liver processing is not required, insulin signaling is not necessary. Dietary fat therefore has minimal effect on insulin levels.
Insulin promotes energy storage and fat accumulation. At mealtimes, we eat a mix of macronutrients – fat, protein, and carbohydrates and insulin rises so that some of this food energy can be stored for later use. As we stop eating (fasting), insulin falls. Food energy must be taken out of storage to be made available for body functions. As long as feeding (insulin high) is balanced with fasting (insulin low), no overall fat is gained.

Insulin plays several key roles to deal with the incoming food energy. First, insulin facilitates the uptake of glucose into cells for energy, by opening a channel to allow it inside. Insulin works like a key, fitting snugly into the lock to open a gateway. All cells in the body are able to use glucose for energy. However, without insulin, glucose circulating in the blood cannot enter the cell.
In type 1 diabetes, insulin levels are abnormally low due to destruction of the insulin secreting cells in the pancreas. Unable to pass through the cell wall, glucose builds up in the bloodstream even as the cell faces internal starvation. Patients cannot gain weight no matter how much they eat, since they are unable to use the food energy. Untreated, this is often fatal.
Second, after immediate energy needs are met, insulin stores food energy for later use. Amino acids are required for protein production, but the excess is converted to glucose, since amino acids cannot be stored. Excess dietary carbohydrates also provide glucose to the liver where they are strung together in long chains to form glycogen in a process called glycogenesis. Genesis means “the creation of”, so this term literally means the creation of glycogen. Insulin is the main stimulus of glycogenesis. Glycogen is stored exclusively in the liver and can be inter-converted to and from glucose easily.
But the liver can only store a limited amount of glycogen. Once full, excess glucose must be turned into fat by a process called de novo lipogenesis (DNL). De novo means “from new”, and lipogenesis means “making new fat” so this term mean literally, “to make new fat”. Insulin creates new fat to store incoming food energy. This is a normal, not a pathologic process, since this energy will be required when the person stops eating (fasting).

Third, insulin stops the breakdown of glycogen and fat. Before the meal, the body relies on stored energy breaking down glycogen and fat. High insulin levels signal the body to stop burning sugar and fat and start storing it instead.

Several hours after a meal, blood glucose drops and insulin levels begin falling. In order to provide energy, the liver breaks down glycogen into component glucose molecules and releases it into general circulation. This is merely the glycogen-storage process in reverse. This happens most nights, assuming you don’t eat at night.
Glycogen is easily available but in limited supply. During a short-term fast (up to 36 hours), enough glycogen is stored to provide all the glucose necessary. During a prolonged fast, your liver will manufacture new glucose from body fat stores. This process is called gluconeogenesis, meaning literally, the “making of new sugar”. In essence, fat is burned to release energy. This is merely the fat-storage process in reverse.

This energy storage and release process happens every day. Normally, this well-designed, balanced system keeps itself in check. We eat, insulin goes up, and we store energy as glycogen and fat. We don’t eat (fast), insulin goes down and we use our stored glycogen and fat. As long as our feeding and fasting periods are balanced, this system also remains balanced.
The new fat made via DNL should not be stored in the liver. This storage form of fat, composed of molecules called triglycerides, is packaged together with specialized proteins call lipoproteins and exported out of the liver as very low-density lipoprotein (VLDL). This newly synthesized fat can be moved off-site to be stored in fat cells, known as adipocytes. Insulin activates the hormone lipoprotein lipase (LPL), allowing adipocytes to remove the triglycerides from the blood for long-term storage.

I can make you fat

Here’s a startling fact. I can make you fat. Actually, I can make anybody fat. How? It’s really quite simple. I prescribe you insulin. Insulin is a natural hormone but excessive insulin causes obesity.
Insulin is prescribed to lower blood glucose in both type 1 and type 2 diabetes. Virtually every patient taking insulin and every prescribing physician knows very well that weight gain is the main side effect. This is strong evidence that hyperinsulinemia directly causes weight gain. But there is other corroborating evidence as well.

Sulphonylureas are drugs that stimulate the body to produce more of its own insulin. Once again, weight gain is the main side effect. The thiazolidinedione (TZD) drug class does not increase insulin levels. Rather it increases insulin’s effect resulting lower blood glucose but also weight gain.

But weight gain is not an inevitable consequence of treating diabetes. Currently, metformin is the most widely prescribed medication worldwide for type 2 diabetes. Rather than increasing insulin, it blocks the liver’s production of glucose (gluconeogenesis) and therefore reduces blood glucose. It successfully treats type 2 diabetes without increasing insulin and, therefore does not lead to weight gain.

Where excessively high insulin levels leads to weight gain, excessively low insulin levels leads to weight loss. Untreated type 1 diabetes is an example of pathologically low insulin levels. Patients lose weight no matter what you try to feed them. Aretaeus of Cappadocia, a renowned ancient Greek physician, wrote the classic description: “Diabetes is . . . a melting down of flesh and limbs into urine.” No matter how many calories the patient ingests, he or she cannot gain any weight. Until the discovery of insulin, this disease was almost universally fatal. With the replacement of insulin, these patients gain weight once again. The drug acarbose blocks intestinal carbohydrate absorption, reducing both blood glucose and insulin. As insulin falls, weight is lost.
Increasing insulin causes weight gain. Reducing insulin causes weight loss. These are not merely correlations but direct causal factors. Our hormones, mostly insulin, ultimately sets our body weight and level of body fat.

Obesity is a hormonal, not a caloric imbalance.

High levels of insulin, called hyperinsulinemia, cause obesity. But this alone does not cause insulin resistance and type 2 diabetes. The conundrum is why fat becomes stored in the organs such as the liver rather in adipocytes.

How to get fatty liver

Excessive insulin drives new fat production. If this occurs faster than the liver can export it out to the adipocytes, then fat backs up and accumulates in the liver. This can be achieved simply with overfeeding of sugary snacks. Glucose and insulin levels quickly rise and the liver handles this glut of glucose by creating new fat through de novo lipogenesis. Hey presto, fatty liver disease.
Overweight volunteers were fed an extra one thousand calories of sugary snacks daily in addition to their regular food consumption. This sure sounds like a lot, but actually only consisted of eating an extra two small bags of candy, a glass of juice and two cans of Coca Cola per day. 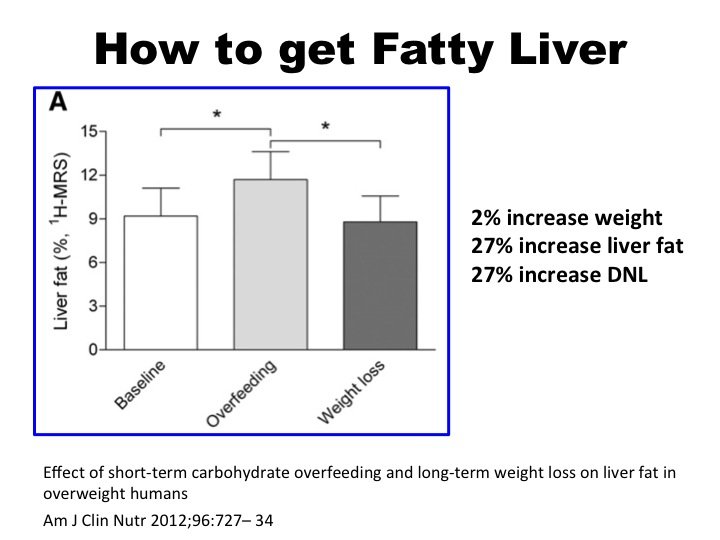 After only three weeks on this regimen, body weight increased by a relatively insignificant two percent. However, liver fat increased disproportionately by a whopping twenty-seven percent! The rate of DNL increased by an identical twenty-seven percent. This accumulation of liver fat was far from benign. Markers of liver damage also increased by thirty percent.
But all is not lost. When volunteers returned to their usual diets, their weight, liver fat, and markers of liver damage completely reversed. A mere four percent decrease in body weight reduced liver fat by twenty five percent.

Fatty liver is a completely reversible process. Emptying the liver of its surplus glucose, and allowing insulin levels to drift back to normal, returns the liver to normal. Hyperinsulinemia drives DNL, which is the primary determinant of fatty liver disease, making dietary carbohydrates far more sinister than dietary fat. High carbohydrate intake can increase de novo lipogenesis 10 fold, whereas high fat consumption, with correspondingly low carbohydrate intake, does not change hepatic fat production noticeably.
Patients with fatty liver derive more than three times more of that fat from DNL compared to those without. Specifically, the sugar fructose, rather than glucose is the main culprit. By contrast, in type 1 diabetes, insulin levels are extremely low, causing decreased liver fat.

Encouraging fatty liver in animals has been long known. The delicacy now known as foie gras is the fatty liver of a duck or goose. Geese naturally develop large fatty livers to store energy in preparation for the long migration ahead. Over four thousand years ago, the ancient Egyptians developed the technique known as gavage. Originally done by hand, modern, more efficient methods of provoking fatty liver involve only ten to fourteen days of over-feeding. 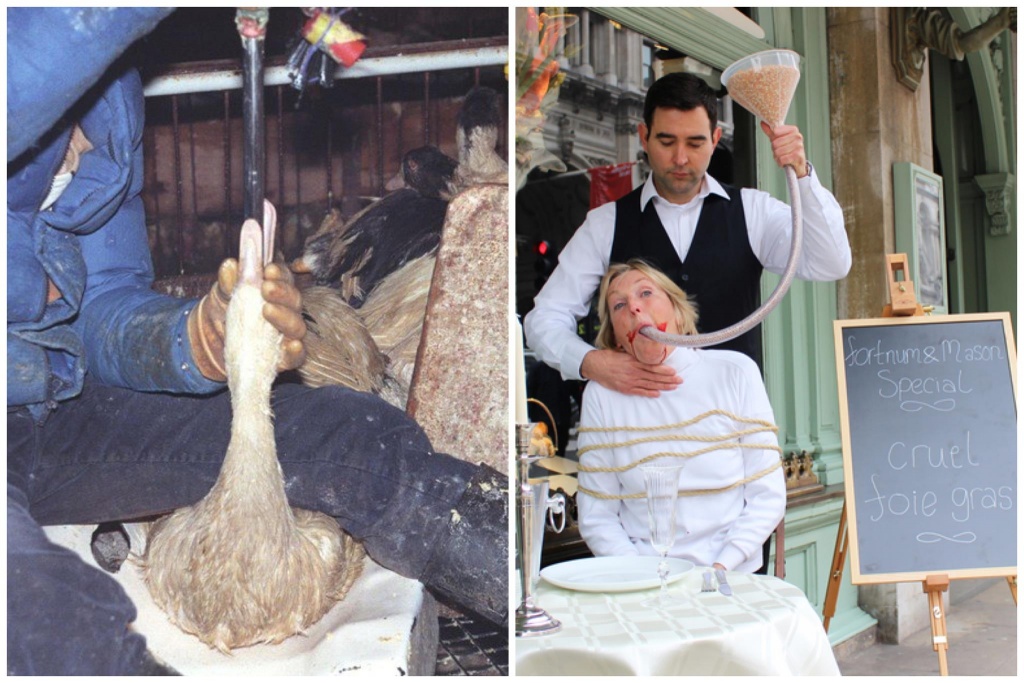 A large amount of high starch corn mash is fed to the geese or ducks directly into the animal’s digestive system through a tube called an embuc. The basic process remains the same. Deliberate overfeeding of carbohydrates provokes high levels of insulin and provides the substrate to develop fatty liver.

In 1977, the Dietary Guidelines for Americans, strongly advised people to eat less fat. The ensuing food pyramid reinforced this notion that we should be eating more carbohydrates such as bread and pasta, dramatically increasing insulin. Little did we know that we were, in essence, making human foie gras.