Recent headlines are filled with proclamations that ‘Meat Kills!’ Nothing sells newspapers like the old chestnuts – meat kills!, saturated fat is bad! Let’s take a quick look at this most recent study see if we can draw some conclusions. The study was called ‘Association of Animal and Plant Protein Intake with All-Cause and Cause-Specfic Mortality‘, and published in JAMA Internal Medicine.
This took data from the Nurses’ Health Study and the Health Professionals Follow-up Study, a large prospective cohort. This means they followed 131 342 patients over decades, asking them what they ate. Some of them will die or develop other illnesses and then they look at the database collected to see if there are any associations. You can’t make any inference of causality, but many people do anyway. Why not? Because these are only associations.

For example, there is a clear correlation between eating ice cream and drowning in the pool. This is because both activities happen more commonly in the summer, not because eating ice cream somehow impairs your swimming ability. Almost all such associations are false because there are usually an infinite number of associations, and only 1 or 2 true causal agents. Swimming accidents for example, are associated with sunburns, driving convertibles with the roof open, going to a fair, having barbecues etc. But there’s likely one main causal factor – if you don’t know how to swim, you are more likely to drown. Duh. With that caveat, let’s look closer at this study.
In this study, they asked people what they ate and classified it as animal or vegetable protein. Plant protein included bread, cereals, pasta, nuts, beans and legumes. Processed meats were bacon, hot dogs, salami, bologna sausage and kielbasa. When taking a cohort group like this, you need to see whether the groups you are comparing differ in other respects other than just the eating of meat vs. vegetable. Turns out, there was a substantial difference.
For example, those eating more plant protein were also more physically active and smoked less. So, in order to level the playing field, researchers make an adjustment. But what’s the proper adjustment? Here’s the problem. You can make any adjustment you like. For example, how much should you adjust for physical activity? You could argue that you should adjust mortality by anywhere from 5% to 100%. It’s meaningless and anytime you see the word ‘adjusted’, just understand that it means ‘we made it up’.
So after adjustment, for every 10% increase in animal protein intake, the hazard ratio for death is 1.02 (not statistically significant) and 1.08 for cardiovascular death (significant). So, the conclusion is that you don’t die more often, but when you die, you are more likely to die of heart attacks and strokes. But here’s what they don’t tell you. If you accept that conclusion, then eating less animal protein gives you less heart deaths, but must INCREASE YOUR RISK OF DYING FROM SOMETHING ELSE. Funny, I didn’t see that mentioned in any of the hysterical articles on how ‘meat kills’. If you accept these conclusions, then you must also accept that ‘vegetable protein KILLS’, but not from heart disease. 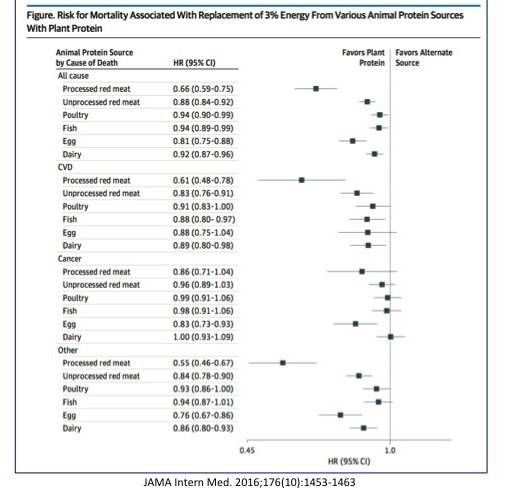 So, with such small differences in hazard ratio, this article is mostly just worthless. It doesn’t tell us much about anything, so why so much ‘spin’ in the media and from the authors? Well, millions of dollars and thousands of man hours were put into this study. If you put out an intellectually honest conclusion – “This study shows that there’s really not much difference to eating meat and vegetable protein”. I can hardly think of a blander headline. No news articles. Nobody cares. So, with a little razz-ma-razz, you can instead generate a sexy headline like ‘Meat KILLS’, why not? As an author, you generate glory for yourself and increased prominence in the academic field. So what if millions of people are misled?
But let’s see if we can actually get something useful from this. When looking at the raw data, you can see that one data point really stands out, and it certainly is not meat versus vegetable protein. The data point that really drives the results is the processed meats. There seems to be a huge disadvantage to eating processed meat. Does that make sense? Sure. 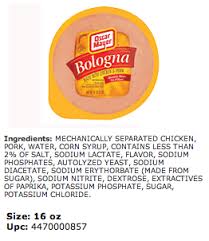 Let’s consider fresh meat and bologna. How are processed meats made? Well, you take the worst, most horrible cuts of meat imaginable, grind it up so that you can’t recognize all the yucky parts that went into it (lungs, hooves, noses etc) and then shove in lots of sugar, chemicals and lots of seasonings, including MSG and other stuff to cover all the terrible flavours. Then you shape it into something that looks vaguely like meat (sausages, sliced meats), package it nicely and then advertise the hell out of it. If you knew how they made hot dogs, you wouldn’t eat it.
What is mechanically separated chicken/pork? Well, they take the chicken carcass, after all the good meat has been removed and they fling it around violently, so that any remaining meat comes away from the bone. Yes, all the eyeballs, nose hairs, lung, intestines get ground up into processed meat.
So, in this bologna, which looks appetizingly like sliced turkey or chicken, it actually contains corn syrup, sodium lactate, sodium phosphates, autolyzed yeast, sodium dictate, sodium erythorbate (made from sugar), sodium nitrite, dextrose extractives, potassium phosphate, sugar, and potassium chloride. WTF?? But here’s the secret. Corn syrup is sugar. dextrose extractives is sugar, sugar is sugar – this ingredient shows up 3 times in the list. Autolyzed yeast is MSG. It’s all sugar and MSG to make things taste good.
Does it seem reasonable to lump this unholy meat concoction together with grass fed fresh beef? Hardly. This brings us back to one of the key messages. Eat real food. Don’t eat processed carbohydrates. But also just as important, don’t eat processed meat or oil either. Processed vegetable oils are not the same as natural fats.
So here’s the real lesson from this study.