The Myth about Exercise – Exercise Part I

We will return to more detailed discussions about hormonal obesity but you might be wondering about that other great pillar of current obesity thinking (Caloric Reduction as Primary – CRaP) – Exercise. 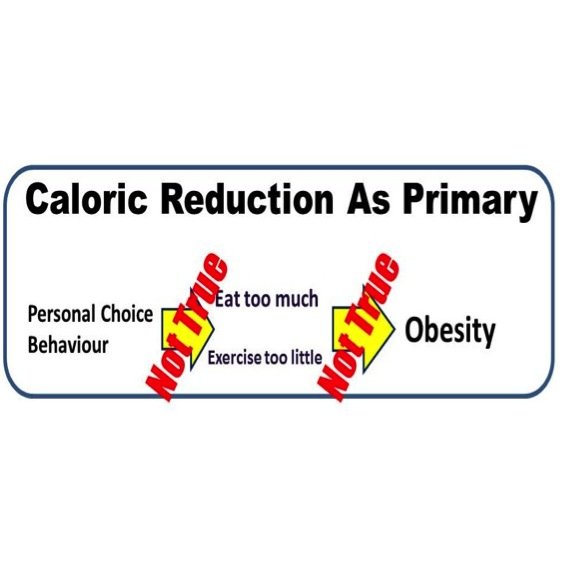 To review the Hormonal Obesity part I, part II, part III, part IV, and part V click here.
To start at the very beginning with the Calories series click here.
The general thinking goes like this.  Obesity is a caloric imbalance – calories in vs calories out.  If the problem is not the calories in, then it must be the calories out.
The ‘calories out’  is more accurately termed Total Energy Expenditure (TEE) which consists of basal metabolic rate (BMR) plus voluntary expenditure (exercise).
TEE = BMR + Exercise
The BMR consists of such metabolic housekeeping tasks as breathing, maintaining body temperature, keeping the heart pumping, maintaining the vital organs etc.
The problem is that the TEE is very difficult to measure.  Therefore, we assume that BMR stays constant.  The only variable we worry about, then, is exercise.  Pretty soon, we make the assumption that TEE is the same as exercise.
One little problem is that the basal metabolic rate does not stay stable.  As we explored in the Calorie series, the BMR can go up or down as much as 50%.  For instance, in response to decreased calories, we can expect BMR to decrease by 40-50%.
However, going back to CRaP theory, we believe that if you could exercise enough, you will ‘burn off’ the calories you take in, and therefore lose weight.  If that were true, then we might expect that as exercise increases, then obesity would decrease over time.  Seems like a reasonable conjecture.  Is it true?
For the vast majority of human history, the idea of exercising was simply ludicrous. Certainly, the idea that there might be health benefits in running or aerobics did not exist up until the 1960s.  Obesity was also not a major issue then. 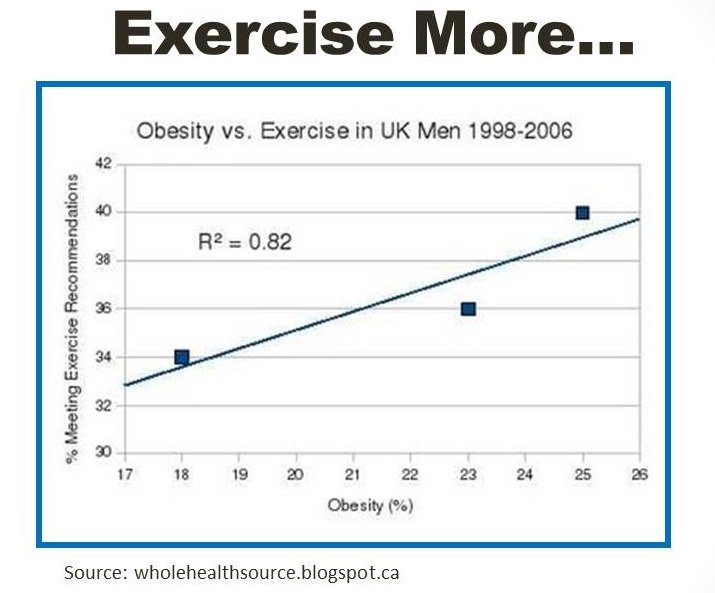 By 1966 the US Public Health Service began to advocate that increasing physical activity was one of the best ways to lose weight.  Over the ensuing decades, we witnessed a fitness boom.  LA Fitness and other aerobics studios sprouted like mushrooms after a rainstorm.
Books such as The Complete Book of Running by Jim Fixx became a bestseller in 1977.  The fact that he died at age 52 of a massive heart attack was only a minor setback to the cause.  Dr Kenneth Cooper’s book “The New Aerobics” was required reading in the 1980′s where I went to high school.
More and more people began incorporating physical activity into their leisure time.  If exercise were really important in the fight against obesity, then as we increase exercise, we should see obesity decrease just as you might expect with CRaP theory.  You go girl!
Here’s the problem.  As more and more people exercised there was really no effect on obesity at all.  Oh, snap.  The truth comes out, embarrassed as a nudist caught with his clothes on.  Obesity increased even as we sweated with the oldies.  As you can see in the graph above, there is an 82% correlation between exercise and obesity.  That is, as we increase exercise, obesity increases.
That is not to say that exercise causes obesity.  More likely, as we become more obese, we increase exercise to try to lose the weight.  But it doesn’t work.  In fact, the ultimate proof is really personal experience.  Who hasn’t tried to increase exercise to lose weight?  It just didn’t work. 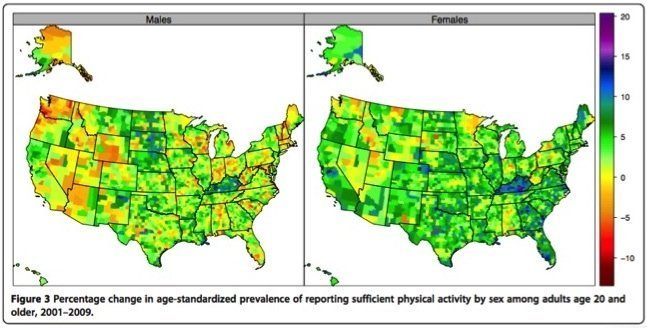 Whether physical activity increases or decreases, there is virtually no relationship to the prevalence of obesity.  There is simply no measurable reduction in obesity from the increased exercise.  It just does not matter.  Irrelevant.  As inconsequential as the busy work that grade school teachers devise to keep children out of mischief.  Higher levels of physical activity did not reduce obesity.
Wait, what about children?  Maybe exercise is more important for childhood obesity?  Let’s look at the article “Association between objectively measured sedentary behaviour and body mass index in preschool children” published in 2013.
Children aged 3-5 had their activity measured using accelerometry and this was compared to their weight.  Here’s their conclusion  “Regardless of cutpoints used, accelerometry-derived sedentary behavior was not independently associated with BMI z-score in two independent samples of preschool children.”
Translation into plain English?  There is no association between activity and obesity.  Aw Dang.
We may also have this preconceived idea that primitive societies had much more exercise than us.  This is the “Cars” hypothesis.  It goes kind of like this.  Primitive societies used to walk everywhere.  Now we drive.  Therefore they were eating alot but they were burning it all off by inadvertant exercise.  Like any good deception, this one sounds pretty reasonable at first.
There is a eensy weensy problem, though.  It is just not true.  Researcher Herman Pontzer found one such modern day hunter gatherer society – the Hadza in Tanzania.  Many days they will travel 15-20 miles to gather food.  With such activity, one might assume that their daily energy expenditure is much higher than a modern day office worker.  In the New York Times “Debunking the Hunter-Gatherer Workout” he discusses the surprising results.

We found that despite all this physical activity, the number of calories that the Hadza burned per day was indistinguishable from that of typical adults in Europe and the United States. We ran a number of statistical tests, accounting for body mass, lean body mass, age, sex and fat mass, and still found no difference in daily energy expenditure between the Hadza and their Western counterparts.

What was that again?  There is no difference in daily calories burned between the walking-all-day Hadza hunter gatherers and my own lazy, car-sitting ass?  Yes.  Oui. Ja.  That is correct, sir.
WTF – How can this be?
The reason is called compensation.  The Hadza, who were walking all day, reduced their physical activity when not necessary.  Those North Americans who were sitting all day, on the other hand, likely increased their activity.
Think about it this way.  If you have been walking all day gathering roots and bugs to eat, the last thing you want to do in your spare time is to go for a 10 km run.  On the other hand, if you have been sitting in a meeting all day, then a 10 km run after work sounds pretty good.
Here’s the bottom line.  There is no measurable association between obesity and physical activity.  I’m not saying exercise is not good for you.  It just doesn’t work that well for weight loss.
We only believe that exercise is effective for weight loss because it has been drilled into our heads since primary school.  The relationship simply does not exist.  Somebody thought it sounded good, but the evidence simply does not back up this relationship.
Continue to Exercise Part II here
Begin here with Calories I
See the full lecture here – The Aetiology of Obesity 1/6 – A New Hope