By the mid 1990s, the landmark DCCT trial has established the paradigm of glucotoxicity, in type 1 but not in type 2 diabetes. Still euphoric from the trial’s success, it seemed only a matter of time before tight blood glucose control was proven beneficial in type 2 diabetes as well.
Nobody stopped to consider exactly how giving insulin to hyperinsulinemic patients was going to help. Nobody paused to consider that insulin toxicity might outweigh glucotoxicity. So, borrowing heavily from the type 1 diabetes playbook, the use of insulin is increasingly used for type 2 diabetes as well.
Over the last decade, the number of patients using insulin rose 50% as almost 1/3 of diabetic patients in the United States use some form of insulin overall. This is slightly horrifying, considering that 90-95% of diabetes in the United States is T2D, where the use of insulin is highly questionable. 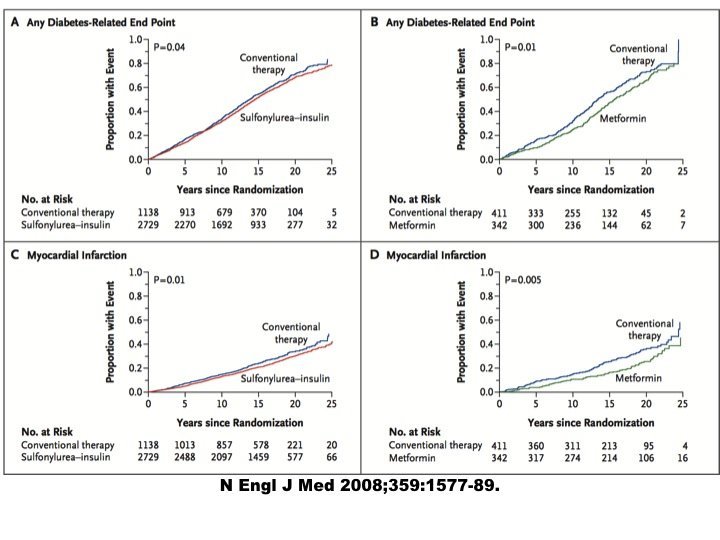 In particular, the priority was to reduce cardiovascular disease. While type 2 diabetes is associated with numerous complications including nerve, kidney and eye damage, the morbidity and mortality associated with cardiovascular diseases dwarfed those by an order of magnitude. Simply put, most diabetic patients died of cardiovascular disease.
The United Kingdom Prospective Diabetes study, known as the UKPDS, was going to be the study that would prove the benefits of intensive blood glucose control. Almost 4000 newly diagnosed type 2 diabetic patients were randomly assigned to two groups. One would follow conventional treatments and targets and the other group would receive intensive group with sulfonlyureas, metformin or insulin.
Sulphonylureas (SUs), have been in widespread use for the treatment of type 2 diabetes since 1946. They lower blood glucose by stimulating the body’s own production of insulin from the pancreas. Since type 1 diabetics have lost their ability to produce insulin, these medications are not appropriate.
The other widely used medication is metformin. Its use in the United States was temporarily halted due to concerns of side effects, but has been used extensively in Europe and Canada for fifty years. Metformin does not stimulating insulin, but instead blocks gluconeogenesis. This lowers the risk of hypoglycemia and weight gain because it does not increase insulin.
In the UKPDS study, the intensive treatment group targeted a fasting glucose of less than 6.0 mmol/L and successfully lowered the average A1C from 7.9% to 7.0%. But there was a price to be paid. Higher dosages of medication resulted in more weight gain, by an average of 2.9 kg (6.4 pounds). In particular, the insulin group gained the most weight, averaging 4 kg (8.8 pounds). Hypoglycemic reactions significantly increased, too. These side effects were expected, though. The question was whether the benefits would justify the side effects.
What benefits?
Published in 1998 the results were absolutely stunning. Intensive treatment produced almost no benefits. Expecting a slam-dunk like the DCCT trial, there was instead only some minor benefit in reducing eye disease. Glucotoxicity was the prevailing paradigm of treatment. But despite ten years of tight blood glucose control, there were no cardiovascular benefits. The discrepancy was shocking, but the story would get stranger still.

Metformin was considered separately from insulin and SUs in sub study UKDPS 34. Overweight type 2 diabetic patients were randomly assigned to either metformin or diet control. Metformin lowered the A1C from 8.0% to 7.4%. This was good, but not as good as the results with the more powerful insulin and SU medications.
Metformin reduced diabetes-related death by a jaw-dropping 42% decrease and the risk of heart attack by a whopping 39%. Metformin performed far superior to the insulin/ SU group despite the weaker blood glucose effect. Something was protecting the organs, but it had nothing to do with the blood glucose lowering effect. The specific type of diabetic medication used made a huge difference. Metformin could save lives, where SUs and insulin could not.
The glucotoxicity paradigm, proven in type 1 diabetes, had just failed miserably in type 2. Blood glucose was not the only player or even a major one. The most obvious concern was the well-known propensity of both SU and insulin to cause weight gain in patients that were already obese, which could lead to cardiovascular problems down the line. Metformin, which does not raise insulin, does not cause obesity and this certainly could have been the crucial difference.
Published peer-reviewed commentary from 1999 reveals that concern was percolating about the real issue, exacerbating hyperinsulinemia in a patient with too much insulin already. Dr. Donnelly from the University of Nottinghmam, UK writes, “The findings could also be interpreted as indicating that insulin and sulphonylureas are equally harmful in the obese, possibly as a consequence of hyperinsulinaemia”.
This is not so difficult to understand. Intuitively, everybody understood that type 2 diabetes was closely linked to obesity. Drugs that would worsen the obesity are likely to worsen the diabetes, no matter what happens to the blood glucose.
Extended follow up of the original UKPDS study allowed detection of some cardiovascular benefits but relatively mild and much smaller than expected. Death rate was reduced by 13% in the insulin/SU group compared to a far more substantial 36% in the metformin group.
The paradigm of glucotoxicity was established for type 2 diabetes, but only barely. Blood glucose lowering medications had marginal benefits that required twenty years of follow up to become apparent. Unanswered questions remained about the differences between types of medications, particularly between those that raised insulin versus those that did not.
The rise and fall of the thiazolidinediones
As the obesity epidemic gained strength, type 2 diabetes relentlessly followed. For the large pharmaceutical companies, this meant only one thing – more potential customers and more potential profit. For many decades, the only available medications for type 2 diabetes were metformin, SUs and insulin. By the early 1990s, it had been eighty years since the development of insulin and fifty years since the introduction of the SUs. Metformin had been first used in the 1930s. Resources poured into the development of new classes of drugs.
By 1999, the first of these new drugs was ready for the primetime. Rosiglitazone and pioglitazone belonged to a class of drugs called thiazolidinediones (TZDs), which bound to the PPAR receptor in the adipocyte to amplify insulin’s effect. These drugs did not raise insulin levels but instead magnified insulin’s effects, both good and bad. This lowered blood glucose, but the also had other predictable adverse effects.
The biggest problem was the weight gain. Over the first six months, patients could reliably expect to gain three to four kg (6.6 – 8.8 pounds) of fat. Insulin encourages salt and water retention, leading to predictable side effects. Fluid retention typically manifested as swollen ankles, but sometimes progressed to frank heart failure – fluid accumulation in the lungs causing shortness of breath. Nevertheless, these were known effects and the benefits were felt to outweigh the risks.
The TZDs were released in 1999, and backed by multi million dollar promotion budgets, quickly became best sellers. They were the Harry Potter of the diabetes world. With almost unprecedented acceptance in the diabetes community, sales zoomed from zero to $2.6 billion in 2006. 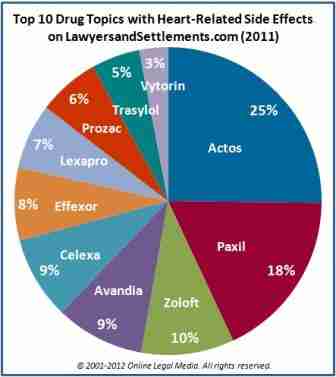 The wheels started to fly off in 2007 with the publication of a meta-analysis in the influential New England Journal of Medicine. Unexpectedly, rosiglitazone increased the risk of heart attacks. The Federal Drug Administration (FDA) in the United States convened an advisory board in 2007 and similar deliberations were held in Europe. Twenty-four independent experts reviewed the available data and concluded that rosiglitazone indeed increased the risk.
There were also significant concerns about data tampering in the RECORD study, one of the largest trials that had ‘proved’ its safety. Subsequent FDA investigation proved that this concern was well placed. Rosiglitazone use was associated with a 25% higher risk of heart attack. Pioglitazone had its own troubles after being associated with a higher risk of bladder cancer.
By 2011, Europe, the UK, India, New Zealand and South Africa had all banned the use of rosiglitazone, although the FDA continued to allow its sales in the United States. However, the glow had faded. Sales shriveled. In 2012, sales had fallen to a paltry $9.5 million.
The debacle left some beneficial policy changes in its wake. All diabetes medications henceforth were required to conduct large-scale safety trials to safeguard the public interest. Dr. Clifford Rosen, the chairperson of that FDA committee identified the key problem. New diabetic drugs were approved based solely on their ability to lower blood glucose, under the unproven assumption that this would reduce cardiovascular burden. However, evidence to date, including the UKPDS and the smaller University Group Diabetes Program had failed to confirm these theorized benefits.
The Cochrane group, a well-respected independent group of physicians and researchers, estimated that glucose control was only responsible for a miniscule 5-15% of the risk of cardiovascular disease. Glucotoxicity was not the major player. It was barely even in the game. What followed, unfortunately confirmed Dr. Rosen’s misgivings.