As it became clear that environmental influences affect cancer rates, the prime suspect was the diet. The natural question, therefore, was what specific part of the diet is responsible. The immediate suspect was dietary fat. From the late 1970s to the 1990’s we were gripped in a hysterical fat phobia. We thought eating fat caused everything bad. It caused obesity. It caused high cholesterol. It caused heart disease.It probably caused bad breath, hair loss and paper cuts, too. There was no actual proof that dietary fat, which humans had been eating since, well, we became human, that this was actually true. But it didn’t really matter, because the entire scientific world was viewed through the lens of the dietary-fat-is-bad lens. Who needs proof if you have dogma? 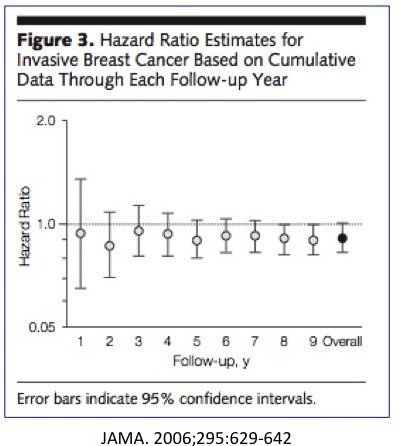 All bad things were caused by dietary fat, so it probably caused cancer, too. Nobody really had any idea why dietary fat should cause cancer. Nobody had ever really noticed that people eating a lot of fat got a lot of cancer. But it didn’t matter. Blame fat for everything was the name of the game. So play on!
Based on this hearsay, the National Institute of Health sank millions of dollars into an enormous trial to prove that dietary fat caused weight gain, heart attacks and breast cancer, too. This Women’s Health Initiative enrolled close to 50,000 women into a massive randomized controlled trial – the gold standard of evidence based medicine. Some women were instructed to follow their usual diet, and the other group would reduce their dietary fat to 20% of calories and increase grains and vegetables/ fruits.
Over the next 8.1 years, these women faithfully reduced their dietary fat and their overall calorie intake with the fervent belief that it would reduce weight, heart disease and cancer. Was their faith in their doctors and researchers justified? Ah, well, the answer is no, no and no. Published in 2007, there were no reductions in heart disease. Their weight was unchanged. And their rates of breast cancer – well that was no better either. It was a stunning defeat. If reducing dietary fat did not reduce breast cancer rates, then it was a pretty good chance that dietary fat did not cause breast cancer.
Lowering dietary fat and caloric intake resulted in no measurable benefits at all. This, the only large scale randomized controlled trial of a low fat diet ever done, was a disaster all around. The benefits of a low fat diet, if any exist, are so minuscule that they are undetectable. This directly contradicted the prevailing beliefs of the entire scientific community. We could either: 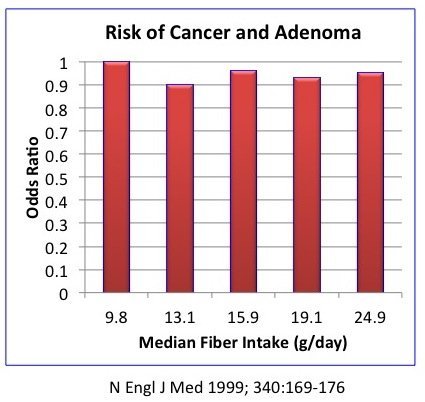 The winner was #2. It was just so much easier to keep doing what we were doing, even if it was totally ineffective. People would get sicker, but hey, at least we didn’t need to relearn the nutritional science. Just bury our heads in the sand and call this huge important study Fake News.
So, the next thought was that perhaps cancer was caused by a lack of nutrients rather than excess nutrients. Here, the gaze landed upon dietary fiber. The legendary Irish surgeon Denis Burkitt spent most of his career in Africa, where he noticed that all of the ‘diseases of civilization’ were noticeably absent in African native populations. This included cancer, which was rare in Africans eating a traditional diet. Africans ate lots and lots of dietary fiber, so he concluded that high dietary fiber could prevent cancers. Following this line of reasoning, he wrote an international best-seller ‘Don’t forget fiber in your diet’.
It was a pretty coherent hypothesis, but evidence did not exist at that time to say whether this was actually true. So, once again millions of health research dollars were mobilized to find an answer. Would eating more fibre prevent colon cancer of adenomas (a pre-malignant form)? In 1999, an analysis of over 16,000 women of the Nurse’s Health Study over 16 years showed no correlation between the amount of fibre they ate and the risk of adenomas. 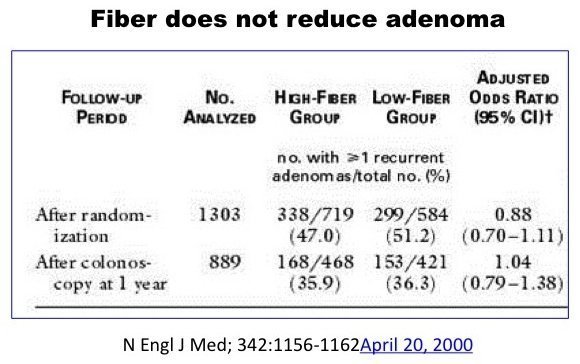 The next year, definitive proof of its futility was published in the prestigious New England Journal of Medicine. A trial of 1303 patients randomly assigned patients to cereal fibre supplements or not, and then measured how many people developed adenomas.
Unfortunately, that number turned out to be exactly the same, whether they got the extra fibre or not. Yes, fibre might make your bowel movements better, but no, they did not prevent cancer. Darn.
So, what about vitamins? People love to take vitamin supplements on the belief that our modern processed diet is lacking in some essential nutrient, which makes us sick. Folic acid is a B vitamin that is necessary for the growth of many cells. Supplementation with folic acid has reduced the incidence of neural tube defects significantly. Maybe it could reduce the rates of cancer, too.
In the early 2000s, there was a huge wave of enthusiasm for B vitamin supplements. Homocysteine levels in the blood were correlated with many diseases, and it turns out that high dose B vitamins could reduce homocysteine levels. Unfortunately, as we later learned, this would have no beneficial effects as homocysteine was only a marker of disease and not causal. Would folic acid supplements reduce colon cancer?
A randomized controlled trial of folic acid supplementation to high risk patients came up with a shocking answer. Shockingly bad, that is. There was no protective effect to taking folic acid supplements. Further, it seemed to increase the risk of advanced cancer, and also increased the rate of having adenomas. Yowzers! Here researchers were trying to prevent cancer, and instead they gave patients more cancer. Worse was yet to come.
In 2009 the NORVIT trial of high dose folic acid and Vitamin B supplementation also showed MORE, not less, cancer. There was a 21% increase in cancer and a 38% increase in cancer death. Double Yowzers! Of course, with hindsight, this stands entirely to reason. Cancer cells reproduce at prodigious rates. This requires all sorts of growth factors and nutrients to grow. With lots of nutrients, the rapidly growing cancer cells are best able to take advantage. It’s like sprinkling fertilizers onto an empty field. You want grass, but the weeds (being the fastest growing plants) are the ones who take up the nutrients and grow like, well, weeds. Cancer cells are highly active and grows like, well, weeds. 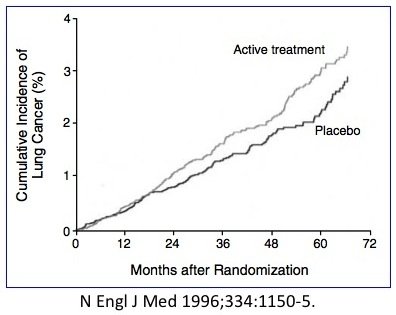 What about beta carotene and vitamin E? This nutrient gives carrots it’s orange colour and perhaps this supplement would work to reduce cancer because of it’s anti-oxidant effects. Vitamin E was all the rage in the 1990s for this same reason, and high dose supplementation was supposed to cure cancer. Epidemiologic studies (observation studies – one of the most dangerous and error-prone studies in medicine) showed that diets high in these foods were associated with better health. Perhaps supplementation would help.
Unfortunately, it didn’t exactly turned out as hoped. A randomized study in 1994 showed that neither agent was able to lower the rates of cancer or death. Beta carotene not only did not prevent cancer, it increased both rates of cancer and death. Giving cancer cells the vitamins needed for high levels of growth turned out to be a not-so-good idea. We weren’t saving patients, we were killing them! Triple yowzers! 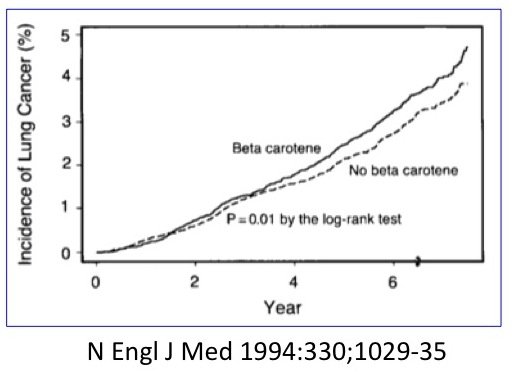 While it may sound trivial, these 5 bits of knowledge took, literally, hundreds of millions of dollars of research money, spread over 25 years to discover. The 5th fact is only gaining recognition within the last few years.
Recently, the CDC released a report “Trends in Incidence of Cancers Associated with Overweight and Obesity – United States, 2005-2014” highlighting the fact that at least 13 cancers are associated, and these accounted for an astounding 40% of all cancers diagnosed in 2014. It comprised 55% of cancers in women, and 24% in men. Worse, the incidence of these obesity associated cancers was increasing rapidly. Adult weight gain of only 5kg (11 pounds) increased the risk of breast cancer by 11%.
What this all means is that cancer is not necessarily a specific vitamin or macronutrient disease (carbs vs protein vs fat). More generally, cancer is concerned with the overall metabolism. Cancer is a metabolic disease at heart. The two most commonly mutated genes in human cancers, p53 and PTEN are now recognized  to be intimately related to signals in cell metabolism.