Dr. Ancel Keys has been accused of many great nutritional crimes, but his greatest blunder was the inadvertent triumph of nutritionism.  Dr. Keys was one of the great proponents of saturated fat as one of the main determinants of the epidemic of coronary disease in the 1950’s and 1960’s.  This led directly to the low fat mania of the 1980’s, which many believe set the stage for the obesity epidemic.  Recently, the Academy of Nutrition and Dietetics reversed their position on saturated fats. It now recommends that saturated fats as well as cholesterol no longer be considered ‘nutrients of concern’. In other words, they no longer believe that eating saturated fats and cholesterol are bad for you. As Dr. Sarah Hallberg writes – Yes, pigs are flying. Hell is freezing over. What happened? 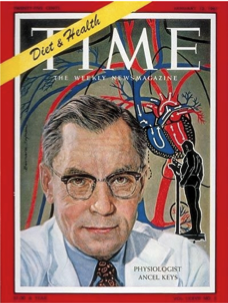 The Seven Countries Study was Dr. Key’s crowning nutritional achievement.  By studying rates of heart disease and dietary saturated fats, he showed an association between these two variables.  Clearly overstepping the reach of the evidence, he insinuated that there was a causal relationship between them.  For this, he has often been vilified.
However, Dr. Keys was simply a man with a hypothesis.  Certainly, he should not have mixed correlation with causation, but he is not the first man to have done so, nor is he the last.  This critical, but juvenile mistake happens in medicine all the time.
For example, take the case of hormone replacement therapy (HRT) in post menopausal women.  There was a strong correlation between women who take HRT and reduction in heart disease.  Pretty soon, doctors convinced themselves that the HRT caused the reduction in heart disease.  Pretty stupid, right?  Well, it didn’t stop thousands of doctors earnestly prescribing HRT to millions of women, my mother included.  When the trial results came in, HRT wasn’t beneficial, it was harmful.  Horribly harmful. Breast cancer increased 26%. Stroke increased 41%. Heart attacks increased 29%. Blood clots increased 100%.  There was no benefit on heart disease.  The company that made HRT was sued into non-existence. Good riddance.
Or consider that high HDL correlates to less heart disease.  Pfizer spent billions of dollars developing torceptratib to raise HDL.  This is simply an association, not a causation.  When studies were done to see, the results were sensational.  But not in a good way.
The drug killed people left and right.  Correlation is not causation.  The fact that people who exercise have higher HDL, and people who exercise have less heart disease seems to have evaded them.  Luckily this error was caught before millions were exposed.  So, yes, this correlation = causation mistake happens. A lot. To some otherwise very good doctors. It is likely because doctors, more than most, want to believe that these things are helpful. This longing to help blinds them in their search for the truth. So Dr. Ancel Keys is not alone in making this mistake.
No, Dr. Key’s great nutritional crime was the inadvertent triumph of nutritionism.  This is the practice where all foods are categorized by their macro or micro nutrient content.  So, instead of discussing foods like beef and kale, we speak of protein and carbohydrates.  We pretend, without proof that all carbohydrates are equal.  That all proteins are equal. That all fats are equal.  That all saturated fats are equal.
If foods were humans, we would call this racism.  By painting an entire race with the same brush, we lose all sense of individualism.  So we might make the mistake that Tiger Woods (as half black and half asian) should be playing basketball, or doing math problems or singing karaoke instead of becoming the greatest golfer of his generation.  We realize this is ludicrous in humans, yet use the same logic for foods.
This brings us to this interesting recent article in The Lancet, Diabetes and Endocrinology, which considers the differing effects of even versus odd chain length in saturated fats.
Saturated fatty acids (SFA) may contain different fats that have entirely different effects on health. While most of the attention has been directed to effects on serum cholesterol, SFAs have other physiologic effects, in particular on the insulin response. Furthermore, blood SFA levels are not solely diet related. The liver can produce new fat in response to high insulin and carbohydrate intake in a process called hepatic de-novo lipogenesis (DNL). Those SFAs produced by DNL are typically even-chained, whereas odd chain SFAs are typically found in the diet. The health consequences are distinctly different.
The odd length SFA (15:0 and 17:0) are good markers of dietary SFA intake.  These are derived predominantly from dairy SFAs.  The body does not make these SFA all of the odd length SFA’s reflect dietary intake.
The even length SFAs, palmitic acid (16:0) and stearic acid (18:0), can be synthesized in the liver by DNL in response to excess carbohydrate intake.  In addition, these SFAs can be taken in through the diet.  So the even length SFAs can reflect excessive dietary SFA or excessive carbohydrates.

So what’s the implication of these different SFAs?
The European Prospective Investigation into Cancer and Nutrition Study (EPIC), a huge multi-national, long-term cohort study following 340,234 people in 8 European countries identified 12,403 new cases of type 2 diabetes.
Even chain length SFAs (14:0, 16:0, and 18:0) were positively associated with the incidence of type 2 diabetes.  This means that high levels of even chain saturated fat in the blood are associated with higher chances of diabetes.  This may be caused by dietary SFA intake, but equally likely by excessive carbohydrate intake. Excessive intake of carbs led to De Novo Lipogenesis in the liver (literally the making of new fat) which produces many even length saturated fats. So, it was the carbohydrates that were increasing even chain length SFAs.

What about the odd chain length?  These are typically the dietary saturated fats – like dairy fats for example. “odd-chain SFAs (15:0 and 17:0)… were inversely associated with type 2 diabetes.”  Full fat dairy contains large amounts of odd chain SFAs, and is consistently associated with protection against Type 2 Diabetes.  In other words, eating more dairy fat protects us against diabetes.
Dairy fat has also been consistently associated with protection against obesity as well, but that is another story for another day.  Looking at the chart of what correlated to even versus odd chain fatty acids, it is striking that dairy raises even chain SFA slightly, but odd chain SFA a lot.  Red meat also tends to raise even chain SFA slightly, but alcohol, potatoes, soft drinks and margarine are the biggest culprits here. They tend to raise Even-chain FA and lower Odd-chain FAs – the worst combination. 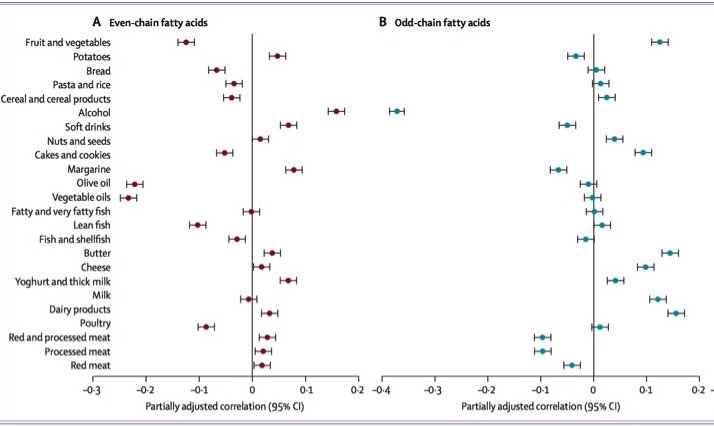 So, we’ve been drinking low fat milk and choking down low fat cheese, all with the delusion that this will improve our health.  We replaced butter with margarine – truly a heinous crime against good taste.  We reduced saturated fats, but the wrong kinds.  All those odd-chain length SFAs were not harmful at all.  All saturated fatty acids are not the same.  We should have been eating high-fat dairy, not low fat dairy.  We should have enjoyed our cream in our coffee instead of skim milk.  We should have eaten the triple cream brie cheese.  And man, oh man, we should have eaten the butter.
There are even trans fats that exist in nature and are not harmful to human health. These are the conjugated linoleic acids (CLA). In fact, many people take supplements of these CLAs. However, the artificial trans fats produced by partial hydrogenation are quite harmful. So, we cannot stereotype even trans fat.  We need to talk about foods, not nutrients.
Dr. Ancel Keys was vilified for the wrong nutritional crime.  The campaign against saturated fat was wrong, but the more insidious and ultimately more dangerous crime was nutritionism.  All fats are not equal.  All saturated fats are not equal.  All carbohydrates are not equal.  As we saw in a previous post “Wheat” you can eat the same carbohydrate, amylopectin, but with dramatically different metabolic consequences.  In wheat, you eat amylopectin A which is completely and easily converted to glucose.  With legumes, you eat amylopectin C which is mostly undigested and food for the colonic bacteria which turn it into … farts.
There is just a huge difference even between the same carbohydrate – amylopectin.  Forget about trying to compare celluloses and hemi-celluloses (vegetable) against the amylose and amylopectins (bread).  To label all carbs as ‘good’ or ‘bad’ is clearly a fool’s errand.
Classifying all fats as ‘good’ or ‘bad’ is wrong.  Classifying all carbs as ‘good’ or ‘bad’ is wrong.  We must stop this stereotyping.  We must talk about foods as individuals.  Yes, broccoli is a carbohydrate, but no, it is not bad for you.  Yes, margarine is a fat, but no, it is not good for you.  We must speak about foods, not nutrients. Racism is a crime against humanity. Nutritionism is a crime against human health.
Start here with Calories I
Start here with How to Lose Weight I
Watch Dr. Sarah Hallbergs TEDx talk “Reversing Type 2 Diabetes starts with ignoring the guidelines”