Obesity is not widely considered a protective mechanism. Quite the opposite. It’s usually considered one of the causal factors of the metabolic syndrome and insulin resistance. I think obesity is a marker of disease, but ultimately it serves to protect the body from the effects of hyperinsulinemia. Let me explain. 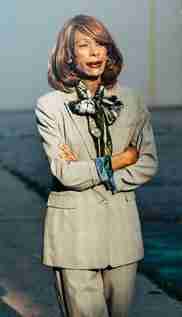 Gina Kolata, a journalist at the New York Times wrote a recent, very interesting article called ‘Skinny and 119 Pounds but with the health Hallmarks of Obesity‘. In this article, she describes Claire Johnson, a patient with a rare case of lipodystrophy, a genetic disorder characterized by the lack of fat. She was skinny but always ravenously hungry and could never get fat, because she lacked fat cells.
In college, Claire discovered that she had a huge, fatty liver, polycystic ovaries and severely elevated triglycerides – all hallmarks of obesity. Yet she was super skinny. She was finally diagnosed in 1996 with lipodystrophy by Dr. Simeon Taylor, who was chief of diabetes at the National Institute of Diabetes, Digestive and Kidney Diseases. He had several other patients all with the same rare genetic syndrome.  These patients had the most severe insulin resistance he had ever seen, but no fat that he could see (subcutaneous variety). Patients eventually also developed high blood pressure and type 2 diabetes, diseases typically associated with obesity.
In rodent models of lipodystrophy, researchers transplanted a little bit of fat back into the fat-free mice. The metabolic syndrome disappeared! The fat was protective against insulin resistance, not causative! What’s happening here?
We need to understand the new paradigm of insulin resistance to understand how insulin resistance, obesity, fatty liver, and fatty pancreas are actually all the different forms of protection our body uses. But what is the underlying disease? Hyperinsulinemia.
Dr Roger Unger had eludicated the basics of the syndrome a few years ago in this article. We’ll take it one step at a time. As I’ve outlined in my book ‘The Obesity Code’, the basic problem is hyper-insulinemia. There are many possible causes of too-much-insulin, but one of the major ones is excessive dietary intake of refined carbohydrates and particularly sugar. However, this is not the only cause. 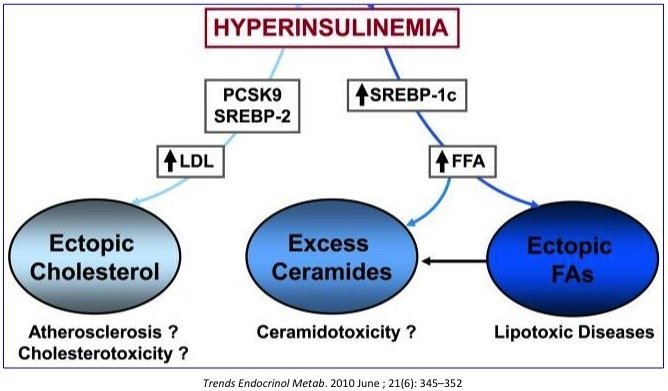 Insulin has several roles. One is to allow glucose into cells. Another is to stop glucose production and fat burning in the liver (gluconeogenesis). After this stops, then it stores glycogen in the liver and turns excessive carbohydrates and protein into fat via de novo lipogenesis. Insulin is basically a hormone to signal the body to store some of the incoming food energy, either as glycogen or fat.
When insulin falls, during fasting, the reverse happens. The body releases some of this stored food energy to power the body. That’s why we don’t die during our sleep. If feeding and fasting are relatively balanced, then it all works as planned.
However, if insulin becomes excessive, then the body is always trying to store glycogen and fat. Since there’s not much room for glycogen, it produces fat. (Note – this is normal. This process reverses during fasting) The liver exports this fat out as triglycerides along with very low density lipoprotein (VLDL) to other organs but particularly to fat cells called adipocytes.
Now, adipocytes are specialized cells to store fat. Having more fat cells is not particularly dangerous. That’s what it does. Other than taking up room, it doesn’t really matter. The fat cell is designed to hold fat, so you don’t get sick from from it. Obesity itself is not the cause of the problem. The critical problem occurs when you get fat where it’s not supposed to be. 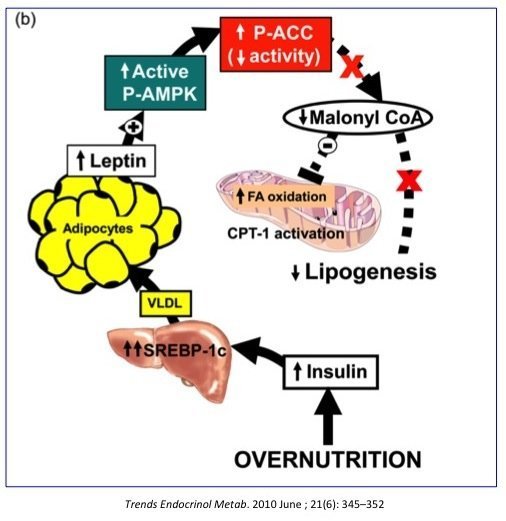 It’s usually first noticed in the liver. Fat is not supposed to be stored in the liver. But under conditions of hyperinsulinemia and excessive carbohydrates, it can develop. Glucose get turned into fat and too much of it ends up in the liver instead of the fat cells. The fat cells (adipocytes) are trying to protect the body by holding the fat in a safe place. Fat inside the fat cell is OK. Fat inside the liver is not.
The fat cells actually have a secondary protective mechanism. The expansion of the fat cells encourages the release of leptin, which will cause us to stop eating. However, over time chronic excessive release of leptin will create leptin resistance, which is what we find in common obesity.
So the liver tries really, really hard not to get anymore fat. But insulin is pushing really really hard to shove more fat into the liver. In Claire Johnson’s case, there are no adipocytes to hold this excess fat so it must remain in the liver and other organs.So, what’s a liver to do? Develop insulin resistance of course! The liver is yelling ‘Get that glucose out of here! It’s killing me’. So the glucose piles up outside in the blood. The insulin resistance is not a bad thing, it’s a protective mechanism. What’s it protecting us from? The very name tells you. Insulin resistance develops to resist insulin. The problem is too much insulin.
Meanwhile, the liver is busy trying to pump out as much of the fat as it can. It’s pumping out triglycerides like its life depended upon it, which it does. So blood triglyceride levels go up (a classic sign of metabolic syndrome). It’s trying to relieve the fat-engorged liver by exporting it out. So muscles get fat, and you get fatty muscle. 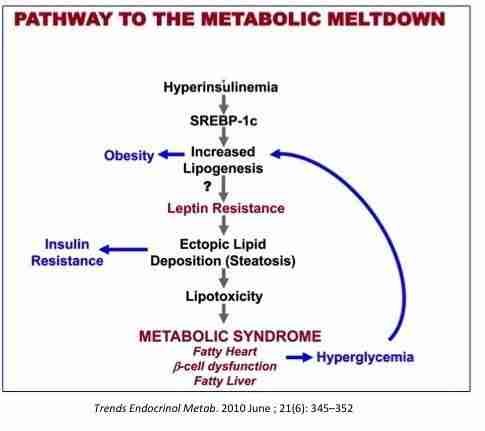 The pancreas also gets some fat and you get fatty pancreas. As the pancreas becomes distended with fat, it produces less insulin. Why? Because it’s trying to protect the body from the effects of too much insulin! The body knows full well the problem is too-much-insulin. So developing fatty pancreas protects us by shutting down production.
Both the fatty liver creating insulin resistance and fatty pancreas, creating lowering insulin levels results in the same thing. Increase glucose in the blood, but organ protection against this excessive insulin. This high blood glucose causes the symptoms of diabetes – excessive thirst, excessive urination and loss of weight. The high blood glucose exceeds the renal threshold of glucose.
The kidneys normally reabsorb all the glucose that passes through. However, when the glucose level exceeds approximately 10 mmol/L, the kidney cannot reabsorb it all. Glucose is excreted in the urine carrying along with it lots of water. Weight is lost as large amounts of glucose are urinated out of the body. Is this bad? No, it’s good!
The precise underlying problem is too much glucose and too much insulin. The body has protected itself by getting rid of all the extra glucose. The lowered blood glucose lowers the insulin, too and creates weight loss. These are all protective mechanisms taken by the body to protect against excessive insulin.
With this new understanding, we can see that obesity, insulin resistance, high triglycerides and beta cell dysfunction are all protective mechanisms against the same problem – HYPERINSULINEMIA. 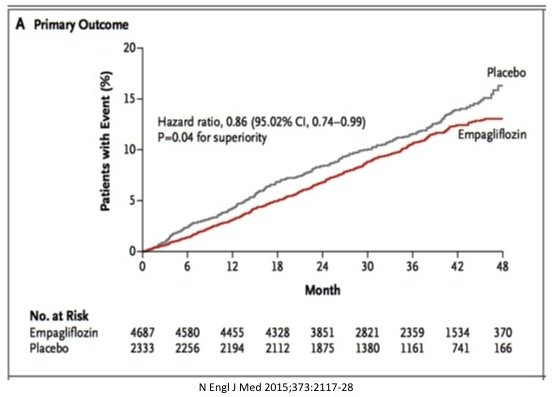 So, what happens when you present to your doctor? Ignoring the hyperinsulinemia, (s)he decides that the problem instead is hyperglycaemia so he prescribes…. insulin! This neatly destroys the protective mechanisms so carefully put into place by the body. It forces glucose back into the body and crams more fat into the engorged, fatty liver and gagging, fatty pancreas. No more glucose is excreted out of the urine, so it instead all stays inside the body to wreak havoc. Nice. Nice.
This is, by the way, the exact protective mechanism which the SGLT-2 inhibitor class of drugs provides. These drugs lower the renal threshold of glucose so that you urinate out glucose – exactly what happens during uncontrolled type 2 diabetes. What happens if you don’t block the protective effect, but enhance it?
The EMPA-REG study was released last year. Using one of these new drugs reduced the risk of death by 38% and the risk of cardiovascular death by 32%. These sorts of benefits were exactly what we were looking for. Because this drug actually gets to the root problem. There’s too much glucose and too much insulin. This lowers glucose and lowers insulin. Of course, if we didn’t treat the type 2 diabetes at all, we probably would have had the same benefit.
There are two main problems with metabolic syndrome. Glucotoxicity and insulin toxicity. It does no good to trade the increased insulin toxicity to reduce glucotoxicity. That’s what we do when we treat people with insulin or sulphonyureas. Instead, it only makes sense to reduce BOTH glucotoxicity and insulin toxicity. Drugs such as SGLT2 Inhibitors do this, but diet is obviously the best way. Low Carb diets. Intermittent Fasting.
In the end, obesity, fatty liver, and type 2 diabetes and all the manifestations of the metabolic syndrome are caused by the same underlying problem. NOT insulin resistance. The problem is hyperinsulinemia. It’s the insulin, stupid!
The power of framing the problem in this way is that it unveils the solution immediately. The problem is too much insulin and too much glucose? The solution is to lower insulin and lower glucose. How? Nothing simpler. Low Carb, High Fat diets. Intermittent fasting.