Normal Follicular Development
The most iconic feature of PCOS and what the syndrome is named for – is the presence of the multiple cysts on the ovary. Many women have a few cysts on their ovary, but the sheer number of cysts distinguishes this syndrome from virtually all others. Almost no other human disease causes polycystic ovaries. These cysts develop from a group of cells known as follicles.
Normal ovaries are endowed at birth with a finite pool of primordial follicles, which have the potential to develop into a mature egg. Primordial follicles remain quiescent for many years until recruited for growth into a primary follicle during the menstrual cycle. From birth to menarche, all primordial follicles remain dormant. Follicle numbers gradually decrease with age as used follicles are never replaced. When the follicles are fully depleted, women undergo menopause and can no longer have children. 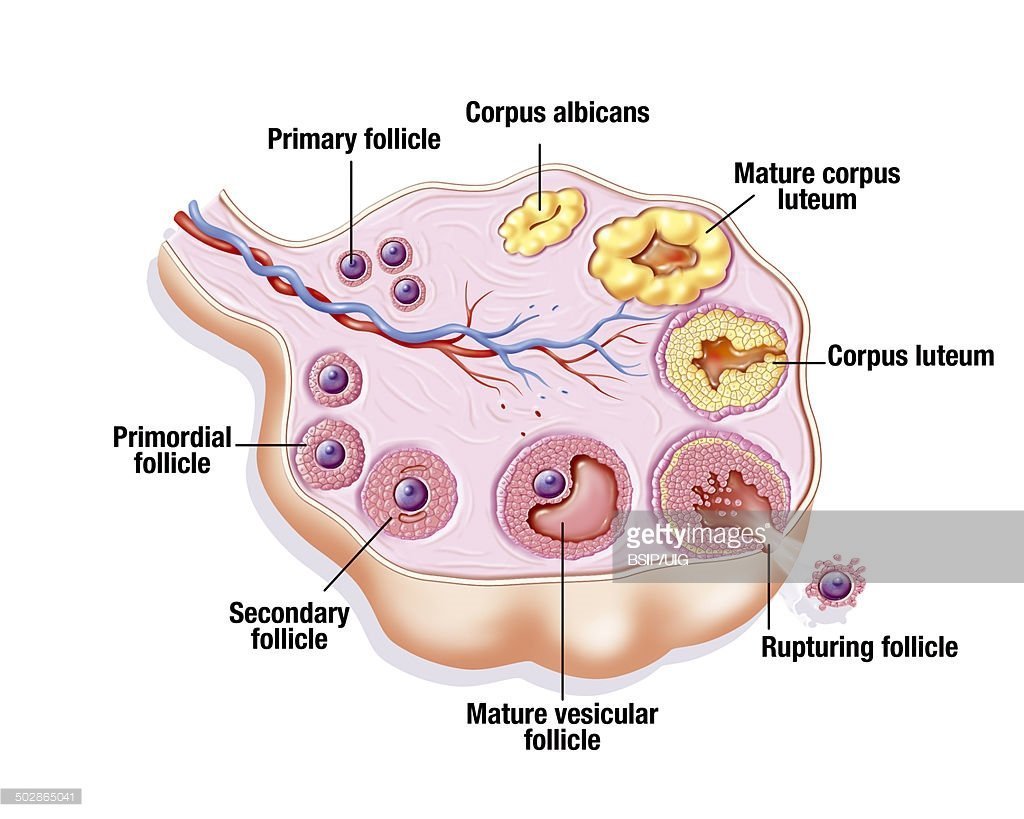 At the start of each menstrual cycle, a few primordial follicles grow into primary and then secondary follicles. Only one of these follicles is selected to become the dominant follicle and the rest simply shrivel away (involute) and are reabsorbed by the body. The dominant follicle alone continues to grow. At ovulation, in response to a surge in luteinizing hormone (LH), the egg is expelled into the respective fallopian tube which carries it to the uterus. The rest of the dominant follicle becomes the corpus luteum, which secretes estrogen and progesterone to support the hoped-for pregnancy.
Primary follicles are generally detectable by ultrasound when they reach 2mm in size. The key growth signal for the primary follicle is testosterone. Insulin is important, too, but acts indirectly by increasing testosterone. The dominant follicle typically measures 22-24 mm.
While the follicle is growing, the lining of the uterus thickens in preparation for egg since it must supply all the necessary nutrients to await arrival of the sperm. If the sperm makes contact and fertilization occurs (yeah, baby), then the uterus continues to increase its growth to sustain the growing fetus. This is the missed period which often signals a normal pregnancy. If the sperm (working late at the office) never arrives, then the egg cannot wait forever. The lining of the uterus is shed, along with the discarded egg, and a woman’s period begins. Typically, this happens once a month.
The normal maturation process from primordial to primary to dominant follicles and then ovulation is quite orderly. Consider an analogy – a school where children start at kindergarten and gradually grow up to graduate high school. Each year they progress in an orderly fashion until, at the end of high school, the student is pushed out into the real world. The follicles, like the kindergarten students start young and grow up in an orderly fashion until finally, when mature, the egg is pushed out into the fallopian tube (ovulation) to await the sperm for fertilization.
Follicular Arrest
In women with PCOS, this entire process of maturation goes awry. In 1982, it was first observed that PCOS ovaries contain 2-3 times the number of small primary follicles measuring 2-5 mm with more recent studies suggesting up to six times the normal number. Too many primordial follicles were forced from the resting phase to become primary follicles, driven by high testosterone levels. With a finite number of primordial follicles, premature depletion may cause premature menopause.
This situation is seen not just in PCOS, but anytime testosterone is excessive since the small ovarian follicles are rich in testosterone receptors. Experiments in rhesus monkeys, for example, show that administering high testosterone doses increases the number of primary follicles by 3 to 5-fold. In humans, exogenous testosterone given to female-to-male transsexuals has the same effect. Rare testosterone secreting adrenal tumors cause the same abnormally high number of small follicles. There is a tight relationship between blood levels of testosterone and the number of follicles detected by ultrasound.
Insulin acts indirectly by increasing testosterone levels but also directly on the ovary to promote this transition from primordial to primary follicle. This is important, because women with PCOS have significantly higher insulin levels than predicted by BMI alone.
The problems don’t stop there. There are too many primary follicles, but no single dominant follicle is selected to continue growing, which is the normal signal for the others to involute. These large numbers of small follicles don’t shrivel up when they’re supposed to, eventually becoming cystic and then visible as polycystic ovaries. This failure of maturation of the follicles is called follicular arrest.
Consider our schoolchild analogy. In PCOS, there are too many follicles starting the transition from quiescent primordial follicle to growing primary follicle. But these follicles never grow up and they never shrivel up either. It is analogous to starting six times the number of students at kindergarten. But these students all stop their studies at grade 6 and never move past that stage. There are simply a huge number of grade 6 students just milling about the school. In PCOS, there are too many small follicles that do not mature to become eggs that can be pushed out into the uterus for fertilization. This failure of ovulation causes the anovulatory cycles and menstrual irregularities. The excessive numbers of small follicles are visible as polycystic ovaries.
High insulin levels are predominantly responsible for the follicular arrest by disturbing the delicate balance of FSH to LH ratio that triggers the correct follicular development.  During normal development, a surge of LH selects the dominant follicle which leads to proper ovulation. The high insulin levels make the follicle too sensitive to LH so they respond too early in the menstrual cycle, when they are not yet ready for ovulation. 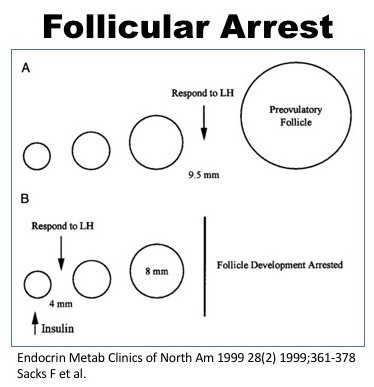 As the small follicles stop growing, no single dominant follicle is selected and there is no signal for involution. Hence, too many small follicles cannot grow any further so they simply accumulate fluid and become cystic. This becomes visible on ultrasound as numerous small fluid filled cysts clinching the diagnosis of PCOS. The reason for the development of polycystic ovaries is follicular arrest, which is ultimately caused by too much insulin.
Going back to our analogy of students, imagine a graduation letter is normally sent to students in grade 12 to stop school, so they can join the workforce or go to university. If these graduation letters are sent to students in grade 6, they will stop school but they are not yet ready either. No students eventually progress to leave high school and neither do they drop out of school. Therefore, they just mill about the school.
In the PCOS situation, insulin sends this ‘stop growing’ message to the follicles much too early. These follicles, not yet mature cannot be either expelled as mature eggs, and cannot involute (shrivel up). Eventually they just become cysts. Lots and lots of cysts.
The eponymous criteria of PCOS are the presence of multiple cysts in the ovaries, which are derived from the multitude of small follicles. But ultimately, these polycystic ovaries are caused by too much insulin and too much testosterone. Both the cysts and the hyperandrogenism are caused by the same underlying problem – too much insulin. What about the other major criteria – the irregular menstrual cycles?