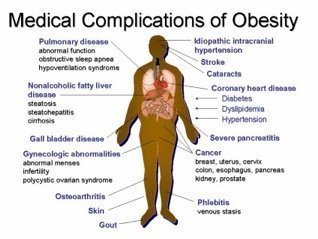 Not all obese women have PCOS and not all PCOS women are obese. Nevertheless,obesity is one of the most common and perhaps most important features of PCOS, despite the fact that it is not part of the diagnostic criteria. Obesity occurs in 30-75% of women with PCOS and is associated with worsening of all three primary diagnostic features of PCOS – increased masculinizing features, worsening menstrual difficulties and more ovarian cysts.In women with PCOS, the risk of type 2 diabetes and prediabetes increases as body weight increases.
There is an obvious connection but the exact link is under debate. There are three possibilities to consider:

Can PCOS cause obesity? Hyperandrogenemia only affects the distribution of fat, not the increase in overall body fat. During puberty, increased testosterone in young men cause less fat accumulation than the increased estrogens in females. While pre-pubertal girls and boys have roughly the same percentage of body fat, this changes dramatically during puberty. Under the influence of estrogens, girls will gain approximately 50% more body fat than boys. The fat is also distributed to the hips and breasts in females, as opposed to the more central distribution in males.
High testosterone promotes central, or visceral, obesity where the fat is distributed primarily in and around the abdominal organs. Thisis of particular concern because visceral obesity is a far greater risk factor for metabolic syndrome and cardiovascular disease.  The different distribution of fat between males and females appears shortly after puberty and disappears after menopause. Women without PCOS have more subcutaneous (under the skin) fat on their arms and legs rather than concentrated in the abdominal area. An estimated 50-60% of women with PCOS have central obesity, regardless of their BMI. This is often noticeable as an increased waist circumference and also referred to as “masculinized body fat distribution” This masculinized fat distribution is associated with lower conception rates and ovulatory frequency. The heavier a woman gets, the less likely she is to ovulate.
Does obesity cause PCOS? That is a more interesting possibility.The severity and risk of developing PCOS increases with obesity but the correlation is very loose. In obesity clinics, a new diagnosis of PCOS was made in a substantial 28.3%. This is a whopping 5-fold increase over the 5.5% prevalence in lean women in the general population 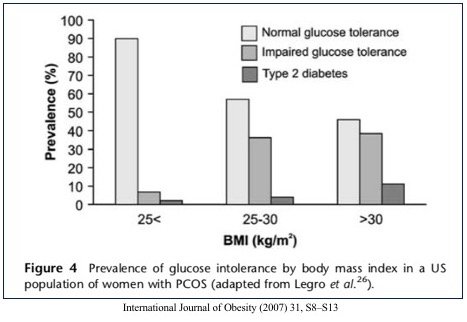 Weight loss improves all signs and symptoms of PCOS. During bariatric surgery, weight loss was accompanied by decreases in hirsutism, androgen levels, resolution of insulin resistance, restoration of regular menstrual cycles. The diagnosis of PCOS could not be sustained in any of the patients after surgery, showing the potential reversibility of this condition. In the United States, rates of childhood and adolescent obesity have almost quadrupled in the last 40 years and is a well-known risk factor for PCOS. Obese adolescents with PCOS have higher insulin levels and increased insulin resistance emphasizing insulin’s huge role in obesity.  In adolescents with PCOS, obesity and hyperandrogenism is clearly related since 65% of obese pre-pubertal girls had elevated testosterone levels.
The foods that we eat have changed significantly in quality, quantity and frequency over the last 50 years. People eat more processed food, in greater amounts, more times a day. My grandmother ate 2 to 3 meals per day entirely based on whole, unprocessed, mostly home-grown foods. Snacks? Forget about it.
Today, nutritional authorities recommend 6 to 7 small meals per day focusing on “whole-grains”, low-fat foods and lots of fruit and vegetables. Processed, processed and partially modified.  Schools have a “healthy snack program” but there is no such thing as a healthy snack! It is bizarre to consider that snacking was considered a superfluous luxury only a generation ago, and now is considered a necessity. Not feeding your child some highly processed, sugary cookies every few hours seems to be grounds for charges of child abuse, even as we wonder why our children are so obese. Humans have survived for thousands of years without snacking. There is simply no medical requirement to put muffins in our mouths every few hours to be healthy.

But obesity is clearly not the sole cause of PCOS, even from my own experience. Indeed, I was normal or even mildly underweight, according to BMI, at the time of my diagnosis, but had clear evidence of PCOS. Obesity, but not PCOS varies widely throughout the world. For example, the prevalence of PCOS is fairly similar between the United States, Spain and the UK, but obesity differs significantly between those countries. Studies show only a very loose correlation between severity of obesity and the prevalence of PCOS. While increasingly severe, obesity, as measured by BMI, is associated with higher rates of PCOS, the correlation is not tight enough to suggest a direct causal relationship.
Obesity, while clearly related in some way to PCOS, is not the sole cause. This leaves only the third possibility, that some underlying factor causes both obesity and PCOS. But what is the other factor? Hyperinsulinemia.