Anovulatory Cycles
Anovulatory cycles are menstrual cycles where no ovulation occurs. 70% of anovulatory infertility is related to PCOS.During follicular arrest, no dominant follicle grows large enough to ovulate. Without a mature egg, conception cannot occur, leading to the devastating realization that one cannot have a baby.
During normal menstruation, progesterone is produced after ovulation by the remnant of the dominant follicle. Without ovulation, this does not occur and there is too little progesterone leading to heavy periods and irregularity. This leads clinically to the irregular cycles found in PCOS. Almost all women will experience some anovulatory cycles in their lifetimes, especially during puberty and menopause.
However, the underlying cause of the anovulation is the excessive insulin and testosterone once again. Since testosterone is mostly overproduced due to high insulin, the singular, most responsible culprit for anovulatory cycles is high insulin. Weight loss and metformin both lower plasma T and improve ovulatory rates, and is the reason metformin is widely used in this disease. Indeed, all known treatments to reduce insulin, including weight loss, bariatric surgery, the drugs somatostatin and metformin significantly improve ovulatory function and symptoms of PCOS. Interestingly, patients with type 1 diabetes using high doses of injected insulin also have an increased risk of PCOS. 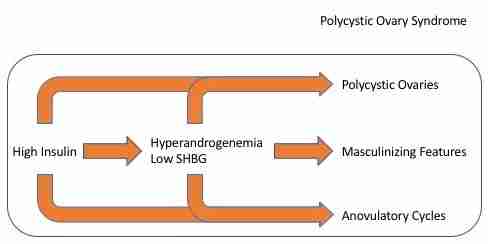 The three defining features of PCOS include polycystic ovaries, anovulatory cycles, and masculine features. All three symptoms reflect the same pathophysiology – too much testosterone, ultimately caused by too much insulin.
Simply put – too much insulin causes PCOS.
Insulin Resistance
Like obesity, PCOS is best understood as a disease of hyperinsulinemia. This explains the close connection between obesity and PCOS –they are both manifestations of an underlying hyperinsulinemia. They do not always occur together, but are closely associated. But what is causing the high insulin levels?
Dietary factors, such as excessive sugar and refined carbohydrates, are certainly important, but they are not the only factor causing high insulin. The other major factor that increases insulin is the presence of a condition known as insulin resistance. 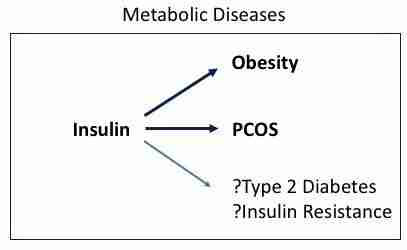 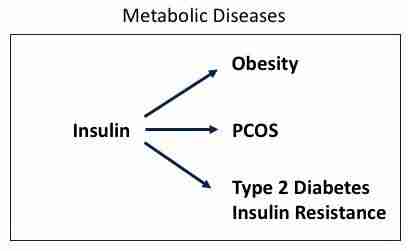 So, PCOS is really just another manifestation of metabolic disease, all of which are caused by too much insulin – hyperinsulinemia. This is crucial knowledge, because if the root cause of PCOS (and obesity and type 2 diabetes) is too much insulin, then the solution becomes fairly obvious – lower insulin. How to do that? The solution is certainly not drilling holes into the ovary. The solution is largely dietary. Low carbohydrate diets and fasting.