The Pima, Sumo and Canine Diets – The Epiphenomenon of Obesity IV

The Pima Indians of the American SouthWest have the highest rates of obesity and diabetes in North America.  An estimated 50% of adult Pima are obese and of those, 95% have diabetes.  How did this occur?  There are many hypotheses.  The Thrifty Gene Hypothesis became popular in the 1970s and some people still believe it.  According to this hypothesis, we are all genetically programmed to gain weight.  However, because food was not generally available, we did not become obese.  In modern times, food is easily available all the time.  Our genes now work against us and compell us to eat and store food as fat.  There are many problems with this theory.
In times of plentiful natural whole foods (crops, game, fish) the Pima did not develop either obesity or diabetes.  A 160 pound person with a body fat percentage of 10% (very lean) could be sustained without food for 30 days.  So it certainly is not necessary for our genes to program us to have 30 or 40% body fat.  Furthermore, it is extremely important to avoid excess body fat for survival.  In the caveman days, I don’t think the 400 pound person who could barely walk would survive in the wild for very long. 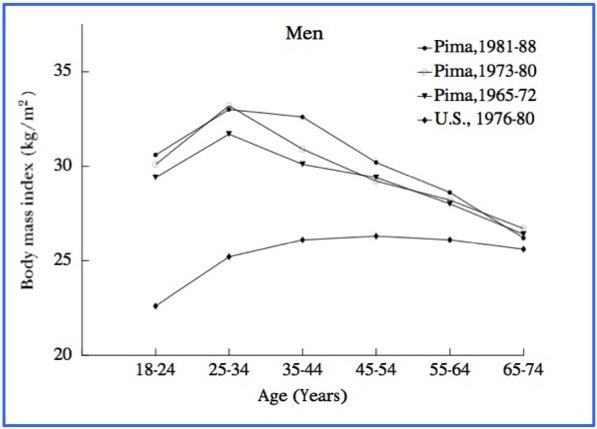 Prior to the 1900′s, the Pima lived in their traditional way relying upon agriculture, hunting and fishing.  Processed foods were not part of their diet.  All reports from that time suggest that the Pima were ‘sprightly’ and in good health.
In the early 1900′s, American trading posts had begun to establish along the West.  Shortly thereafter, American farmers diverted the water supply the Pima relied upon for agriculture.  This caused widespread famine.  The government stepped in with food aid to ease their burden.  Enter sugar and flour.  This began to replace the traditional foods of the Pima Indians.  By the 1950s, there was widespread obesity in association with grinding poverty.
This situation was not unique to the Pima Indians.  Obesity and diabetes (Diabesity) had become a problem for virtually all of the native American tribes.  This occurred many decades before the current epidemic of obesity hit North America.  Most native tribes developed obesity in the 1920-1950 era, long before the current epidemic that started in 1977.
Some believe that obesity is the result of increased use of computers, or video games, or increasing use of cars.  Others suggest the increased prevalence of fast food, or eating out is to blame.  However, this does not explain the obesity epidemic in the Pima decades before these were widespread behaviours.  It seems paradoxical that obesity would be established before these other factors.
What explains the Pima Paradox?  Simple enough.  The same thing drives obesity in the Pima as obesity everywhere else.  The fattening carbohydrate.  When the Pima replaced traditional, unrefined foods with highly refined sugar and flour, they became obese. 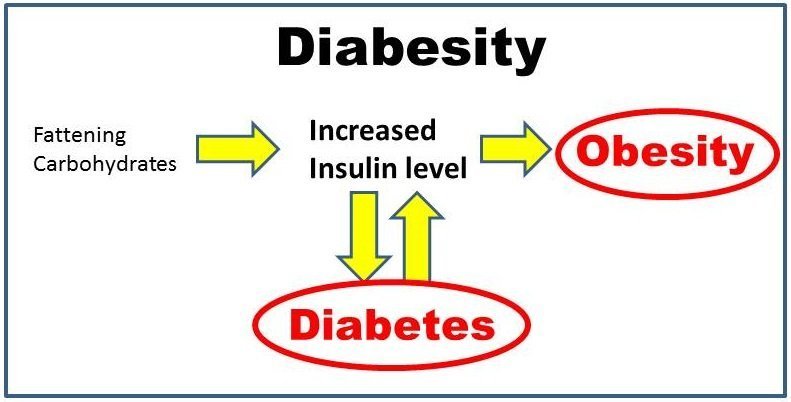 As they became obese, they developed insulin resistance and therefore diabetes.  The insulin resistance led to further increases in insulin levels and perpetuates the diabesity.
It is also useful to study the Sumo diet.  After all, the Japanese have spent a long, long time learning how to make somebody gain weight – something virtually nobody else has done.  They are also obsessed with toilets, manga and really, really small (banzai) trees, too, but those don’t really concern us at the present.  It is interesting because no other culture has made such a study of how to gain weight. 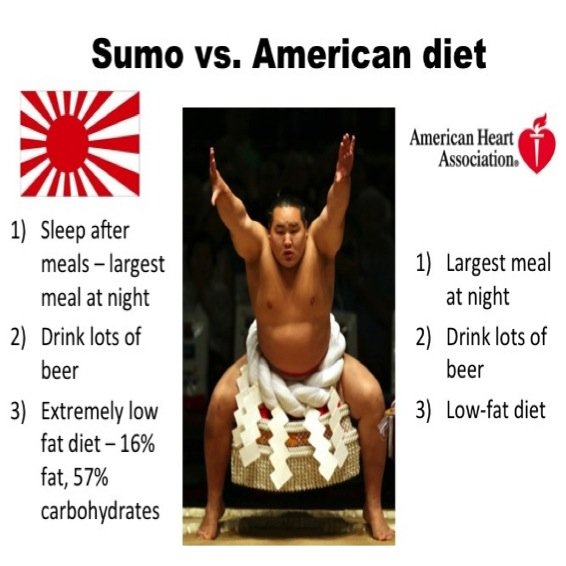 Sumo wrestlers often weigh 400-600 pounds, but of course, a significant portion of that is muscle as well as fat.  The basis of their diet is chankonabe – a stew of fish, meat, tofu and vegetables.  And, of course, 5-10 bowls of rice and 6 pints of beer.  And that’s just for lunch – they will have another large meal at dinner, too.  It is an extremely low fat meal – approximately 16% fat and 57% carbohydrates.
Sleeping after eating is also routine.  A large lunch followed by a nap, and a large dinner followed by sleep.  Let’s see.  A very low fat diet.  High in refined carbohydrates and beer.  Eating a large dinner followed by sleep.  Sounds an awful lot like the diet recommended by the American Heart Association.
You might think that the 10,000 calories they eat plays a role as well.  Certainly there is some truth to that, but calories alone are not enough as we explored in the Calorie Series.  It is possible to eat 5,000 calories a day of a low carbohydrate, high fat diet and still not gain significant weight.  So calories by themself are not sufficient.  Overfeeding studies also show the difficulty in simply giving more calories to gain weight.  In some overfeeding studies, subjects took as much as 10,000 calories a day, but only gained a few pounds.
It is not simply humans who are developing obesity.  The same holds true for pets as well.  Over 50% of cats and dogs are classified as overweight or obese.  A close look at the ingredients of popular dog food may give us a clue as to the reason.

The first ingredient is ground yellow corn.  There is also corn gluten meal, whole wheat flour, rice flour and sugar.  All refined carbohydrates.  Dogs, of course are carnivores and should not be eating carbohydrates.  The same thing that drives human obesity tends to drive canine obesity as well – the fattening carbohydrate. 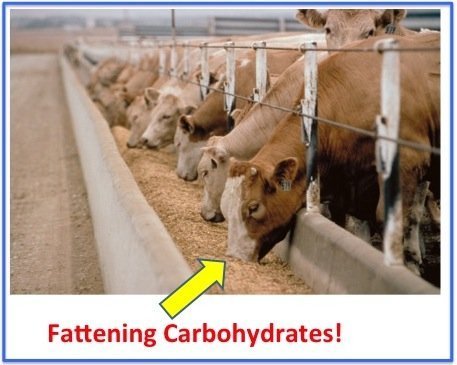 The same thing is true for cattle.  In todays industrial farms, there is an emphasis on getting cattle fattened so that they can get to the dinner table.  Cows normally eat grass, but it turns out that this is a very poor way to get them fat.
Typically, Cattle are raised in a feedlot with a lot of up to 90% grains.  This has the effect of fattening the up quickly for slaughter.  The same thing drive bovine obesity that drives human obesity – the fattening carbohydrate.  In tropical countries that do not grow a lot of grain, molasses can be substituted.  Ranchers, who have studied every way of fattening cattle, quickly realize that nothing works quite so well as the fattening carbohydrate.
Feeding cows grains also has the effect of introducing more fat streaking into the muscles.  This, of course, is not normal or healthy for the cow.  The fat is not supposed to be in the middle of the muscle.  However, it does make the meat more tender so that grass fed beef are often finished on grains.
Continue to The Epiphenomenon of Obesity part 5 here
Begin here with Calories I
To see the entire lecture – The Aetiology of Obesity 2/6 – The New Science of Diabesity