The weight gaining potential of protein is a complex question.  Let me reiterate here that this area of research is still very new and we certainly do not have all the answers.  While refined carbohydrates (white flour) and sugar are almost universally considered fattening, there is maddening debate about the virtues or flaws of dietary protein.  In particular, dairy proteins and red meat seems to be the most controversial.  See the last post for more details.  Indeed, the answer is not nearly as easy as it may seem.  There seems to be good data supporting both points of view.
There are two considerations here – the incretin effect, and dose of dairy protein.  First, the insulin increase in response to protein is a result of incretins rather than an increase in blood glucose.  Incretins such as GLP-1 and GIP not only raise insulin, but have other significant effects as well.  GLP-1 has been shown to not only increase insulin secretion, but it also plays a role in control of gastric emptying.  For example, infusion of GLP-1 in humans causes a significant slowing of the emptying of the stomach.  This has the effect of slowing the release of nutrients and glucose in the body, which may be beneficial in a similar way to fibre.
The best way to study the effects of incretins would be to use a drug that mimic the effect of of GLP-1.  The first such drug developed was called exenatide, also known as Byetta.  Isolated in the saliva of the Gila monster (how cool is that?), this drug was approved for the treatment of type 2 diabetes.  Byetta mimics the effects of GLP-1 which causes an increase in insulin secretion via the incretin effect and thus, blood glucose is lowered.  Because of the blood sugar lowering effect, this drug has been used for type 2 diabetes for years.  But other effects have been noticed as well.  Byetta caused a slowing of gastric emptying, which leads to feeling of nausea or GI upset in patients. 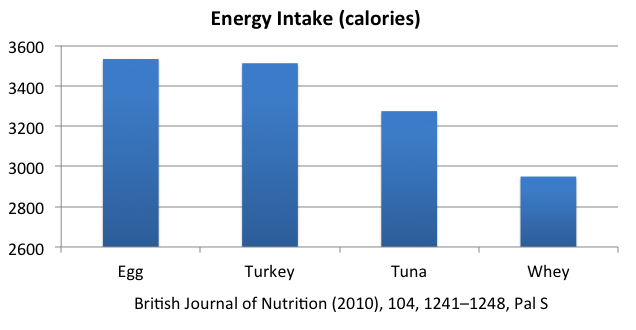 The normal action of the stomach involves holding the food just eaten, mixing with stomach acid and slowly discharging the contents into the small intestine at a measured pace.  With Byetta, this discharge of stomach contents occurred much slower than usual.  The major side effects of Byetta – nausea – is seen in up to 57% of patients taking this drug.  Patients often report a feeling of satiety or feeling full.  This is similar to the effect of dietary proteins seen in the last post where whey protein caused the greatest increase in insulin, but also the greatest feeling of satiety.
In that study subjects were given equal calorie portions of egg, turkey, tuna or whey.  The greatest insulin effect was seen with whey protein.  However, subjects were then given an all you can eat buffet after ingestion of the protein, and monitored for amount eaten.  The amount of food consumed after whey protein was significantly less than with egg or turkey.
This would be consistent with personal experience.  Dietary proteins tend to cause you to feel more full for longer.  Imagine you have equal caloric amounts of 2 foods – a steak versus ice cream.  How long would you feel full after the steak versus the ice cream?  My guess is that the steak will make you fuller for longer.  It just ‘sits’ in your stomach.  That is the incretin effects slowing the gastric emptying.  Ice cream, on the other hand, or cookies do not ‘sit’ in your stomach for long.  Soon after we eat them, we become hungry again.
Thus, there are two opposing effects of the incretins on weight – insulin and stomach emptying effects.  On the one hand, insulin may be fattening.  On the other hand, because the stomach is fuller for longer, our satiety mechanisms are activated and we feel full, and thus do not eat as much later on.  Which effect is more powerful?  The way to find out is to give incretins and see if patients gain or lose weight.  This class of drugs – which includes Byetta as well as liraglutide (Victoza) are in fact not associated with weight gain despite the increase in insulin levels.  Instead, both drugs cause weight loss due to the effect on gastric motility.  It appears that stimulation of the incretin effect with GLP-1 triggers more weight loss effect than weight gain.
However, this weight loss is only found with selective GLP-1 stimulation.  Remember that the incretins include both GLP-1 and GIP, so far.  More may yet be discovered.  Whey may have more of an effect on the incretin GIP rather than GLP-1.  Is this important?  I don’t actually know.  However, what it means is that we need to be careful before extrapolating that whey can help weight loss.
There is also a class of medications called the DPP4 inhibitors, of which sitagliptin, and saxagliptin are examples.  Rather than mimic GLP-1, they block the enzyme dipeptidyl peptidase-4 (DPP4).  This DPP4 enzyme breaks down both GIP and GLP-1.  Blocking the enzyme that breaks down incretins leads to an increase in incretins.  A double negative.  See what I did there?  DPP4 leads to less incretin.  Blocking DPP4 leads to higher incretins.  My point here is that there is an increase in both GIP and GLP-1 with DPP4 inhibitor drugs.  The question – does DPP4 inhibitor leads to weight loss?  No.  They also do not lead to weight gain,  They are instead, weight neutral.  Switzerland.  So which specific incretin is stimulated may be important in determining weight gain or loss.
The other major consideration, particularly for dairy is the dosage of protein.  An average American diet is 50% carbohydrate.  It is easy to eat more carbohydrate.  A few more slices of bread, a big plate of pasta.  If you wanted to increase protein, you could also eat a large steak.  However, how can you increase dairy protein alone?  Can you eat a huge slab of cheese for dinner?  How about drinking several gallons of milk?  Two large tubs of yogurt for lunch?  It is really not that easy to significantly increase the dosage of dairy proteins without resorting to whey protein shakes and other such artificial foods.  You can drink an extra glass of milk, but that doesn’t change the macronutrient composition of the diet very much.  However, reducing refined carbohydrates from 50% to 10% is a huge change in diet composition.
Therefore, even if dairy proteins are particularly good at stimulating insulin, we do not eat or drink enough of these proteins to make such a large difference in the overall scheme of things.  Think about it this way.  Bunting is a part of the game of baseball.  However, the difference between really good bunting and bad bunting is not likely to make any difference to the outcome of the baseball game.  It just doesn’t matter that much.
However, when we talk about red meat and other proteins, the story is slightly different.  It is not so difficult to increase animal protein in the diet.  Substitute a slice of bread for an extra hamburger patty.  Eat more chicken.  Have a large steak.  Eat a bowl of chili.
So what is the effect of whey protein on weight gain?  What is the effect of red meat on weight gain?  That may, I suspect, depend upon the balance of weight gaining and weight losing effects of the incretin effect, which will depend upon which incretin is stimulated.  The answers are, again, far from clear.  However, we can look at some large scale epidemiological data to point the way.  Stay tuned…
Continue here to Hormonal Obesity XXVI – Red Meat Dilemma
Start here with Calories Part I – How Do We Gain Weight?
See the entire lecture – The Aetiology of Obesity 3/6 – Trial by Diet