One of the most urgent health problems facing the Western world is the enormous health burdens placed by diseases such as obesity and type 2 diabetes. They lead to life changing events like heart disease, stroke, cancer. Not only that, but fatty liver (non-alcoholic steatohepatitis or NASH) will very soon become the leading cause of cirrhosis in the United States and Canada. Type 2 diabetes, closely related to obesity is by far and away the leading cause of kidney disease, blindness and amputations (due to peripheral vascular disease). It is also a major contributor to cardiovascular disease (heart attacks and strokes), and cancer.

The rather unbelievable truth is that all of these disease – heart attacks, strokes, liver disease, kidney disease, cancer, blindness and amputations – are all traceable back to the diabesity epidemic. In the United States, the government has gathered its most influential doctors/ scientists/ nutritionists every 5 years since 1980 to draft the Dietary Guidelines for Americans.
Yet, despite all this advice, the epidemic continues unabated. If anything, it is gaining strength. So, the proof is the pudding. Something is obviously NOT working. There are two possibilities here. First, the advice is good but people aren’t following it. Second, the advice is bad.
Experts, like the Queen of Modern Nutrition, Nina Teicholz, and advocacy groups, like the Nutrition Coalition sprang up to help steer the dialogue towards rational solutions. Too often, government agencies are mired in bureaucratic mess dedicated to maintaining the status quo. However, the facts remain that the current dietary guidelines are a total disaster. That’s not just me talking. Look at the numbers. More obesity. More T2D. More dialysis. More blindness. A disaster.
Let’s see what’s happening in the UK. Unfortunately, the situation doesn’t look any better across the pond. Their national guidelines are a similar mess – advising to eat a high carbohydrate, low fat diet. Yet after decades of this advice, obesity and diabetes rates are also skyrocketing. 25% of adults are obese – the highest in Europe. Diabetes has risen by 65% with no end in sight. 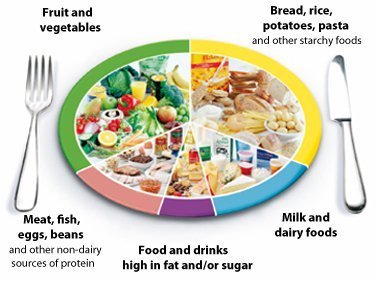 So, again the question comes up. Is the problem that the advice is good, but people aren’t following it? That’s certainly what most authorities would have you believe. The numbers, though show a completely different picture. The UK uses the EatWell plate, or as my friend Zoe Harcombe calls it, the Eat Badly plate.
Eating bread and other refined starches as one of the biggest parts of your plate looks to me like a recipe for obesity. Low fat dairy, another huge part of the plate also seems like an excellent way to fatten people up. So, absolutely, this is a terrific way to gain a lot of weight very quickly. Was that the point? No? 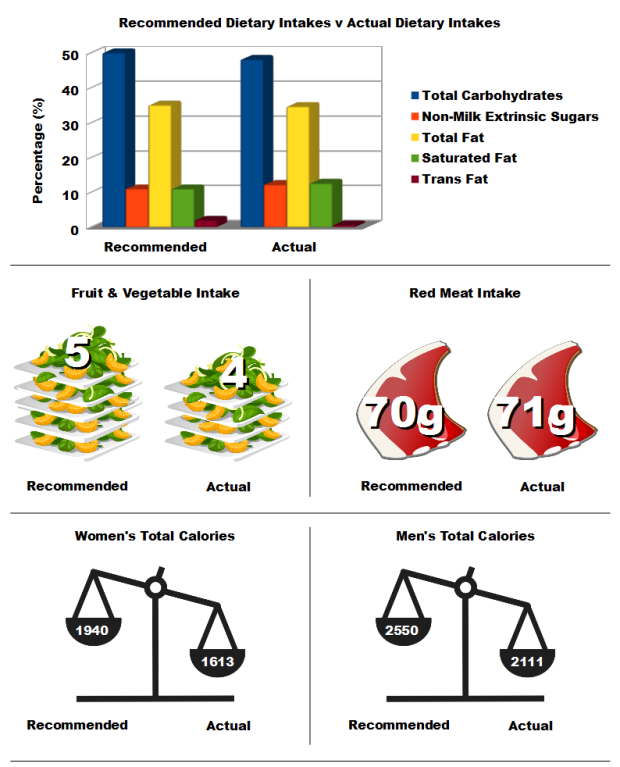 What did people actually eat, though? Was the advice good and the people bad? Not really. It looks like people took the advice to heart and tried to comply the best they could.
Starting with the first graph, the recommended macronutrient breakdown recommended seems pretty similar to the diet that most people took. While people fell short one serving on fruits and vegetables, they cut way back on red meat and pretty much hit their target.
What about calories? We hear, ad nauseum that we are eating too many calories. We need to cut calories. Its all about Calories In Calories Out.
The modern version of this rather tired and way-past-retirement theory is that food is engineered to be more delicious and therefore we are eating more (food reward theory). This theory holds that food is designed to be ‘ultra-palatable’ and we simply can’t resist ourselves and eat too many calories. Right. Food suddenly got delicious in 1977. Food was kind of gross for the previous 2000 years up to 1976, then we figured out how food could be delicious. Right.
Anyway, it looks like people cut back calories just like the doctor ordered. In fact, people took this last piece of advice especially to heart. They are eating far less calories than even those recommended.
Unfortunately, because calories are not the main driver of obesity, cutting calories (Caloric Reduction as Primary strategy – CRaP) just doesn’t work. Of course, it has never worked, but that’s besides the point.
So, the problem is not with the people. The only logical deduction is that the advice to cut calories and fat was simply a bad one. The advice was wrong. So, logically, we need to change that advice. However, there are a lot of vested interests to keep things as they are.
The only way to change the health of the nation is to lobby. We can’t keep giving out bad advice. Our very lives hang in the balance. Luckily, my friend Sam Feltham has created the Public Health Collaboration UK, a non-profit organization to fight for these very changes that are needed. And he needs your help. He has closed down his business and has dedicated himself to fighting for all of us against Big Pharma, and Big Food and the bureaucracy and stagnant imaginations of government agencies. I can hardly think of a more deserving cause.
He needs donations to run the organization for a few months. I hope you will consider helping fund this very worthy cause. I have contributed personally, and I hope you will also.
Jason Fung