The first step in virtually any weight loss program is to reduce added sugars.  Sugar is particularly fattening because it increases insulin both immediately and insidiously over the long term. Sugar is comprised of equal amounts of glucose and fructose. Glucose, as a highly refined carbohydrate, will immediately raise blood sugar levels and directly stimulate insulin. Fructose does not raise blood glucose levels, but contributes directly to insulin resistance in the liver. Over time, that insulin resistance will lead to higher insulin levels. 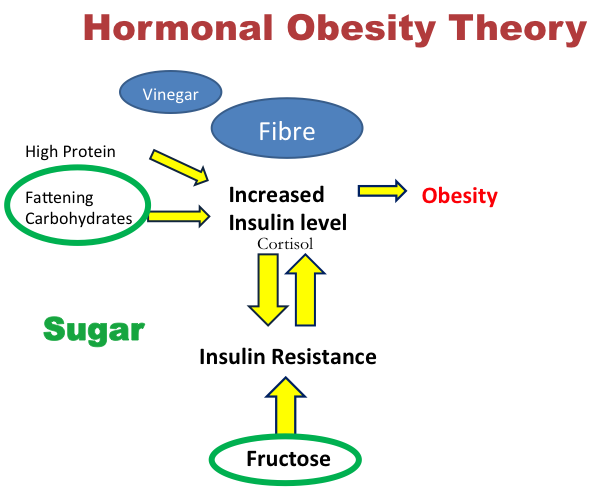 This makes sucrose and high fructose corn syrup exceptionally fattening.
This is fairly uncontroversial advice. Sugar is empty calories, but it is far more sinister than that. Sugar stimulates insulin secretion, but it is far more sinister than that. Sugar is uniquely  fattening because it directly produces insulin resistance. With no redeeming nutritional qualities, added sugars are usually one of the first foods to be eliminated in any diet. Sugar is merely an indulgence. However, avoiding sugar is easier said than done.   Because sugars are everywhere in processed food, a surprisingly large amount may be ingested without realization. Obviously, the first step is to remove the sugar bowl from the table. There is no reason to add sugar to any food or beverage. But sugars are often hidden in the preparation of food.
Many natural, unprocessed whole foods contain sugar. For example, fruits contain fructose and milk contains the natural sugar lactose. A distinction is usually made between naturally occurring and added sugars. The two key differences are the amount and concentration. Fruit contains far less fructose than processed foods. They also contain vitamins and nutrients along with a large amount of soluble and insoluble fibre (the ‘pulp’). This dietary fibre may act as an ‘antidote’ to the harmful effects of fructose. The bulking effect of the fibre prevents overeating.
Sugars are often added to foods during processing or cooking. Because they are not naturally present in whole foods, several potential dangers lurk. First, added sugars may be added in unlimited amounts. There is no upper limit to the amount of sugar that may be added. Second, sugar may be concentrated much higher than natural foods. Some foods are virtually 100% sugar. This situation virtually does not exist in natural foods, with honey possibly being the only exception. Candy is often little more than flavored sugar. Third, sugar may be ingested by itself. This may cause people to overeat these sugary treats, as there is nothing else to make you ‘full’. There is no dietary fibre that may offset the harmful effects. For these reasons, we direct most of our efforts towards reducing added sugars, as opposed to naturally occurring sugars.

Almost ubiquitous in refined and processed foods, sugar is not always labeled as such. Other names include sucrose, glucose, fructose, maltose, dextrose, molasses, hydrolyzed starch, honey, invert sugar, cane sugar, glucose-fructose, high fructose corn syrup, brown sugar, corn sweetener, rice/ corn/ cane/ maple/ malt/ golden/ palm syrup and agave nectar. These aliases attempt to conceal the presence of large amounts of added sugars. Another popular trick is to use several different pseudonyms on the food label. This prevents sugar from being listed as the first ingredient.  For example, an ingredient list may contain 3 different sugars such as sugar, brown sugar and corn syrup.  Because the sugar content is now split into 3, the first ingredient listed is now …. Whole grain wheat.  Ta Da!  This example comes from a sugared breakfast cereal. 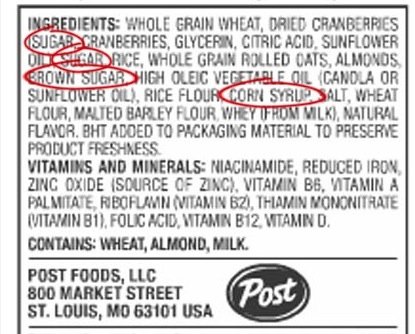 The addition of sugar to processed foods has almost magical flavor enhancing properties at virtually no cost. Sauces are serial offenders. Barbeque, plum, honey garlic, hoisin, sweet and sour and other dipping sauces contain large amounts of sugar. Spaghetti sauce, for example may contain as much as 10-15 grams of sugar (3-4) teaspoons. This counters the tartness of the tomatoes, and therefore may not be immediately evident to your taste buds. Commercial salad dressings and condiments, such as ketchup and relish often contain lots of sugar. The bottom line is this. If it comes in a package, then it likely contains added sugar.
How much sugar is acceptable? There is no correct answer to this. It is similar to asking the question – how many cigarettes are acceptable? Ideally, the number is zero, but that likely will not happen. 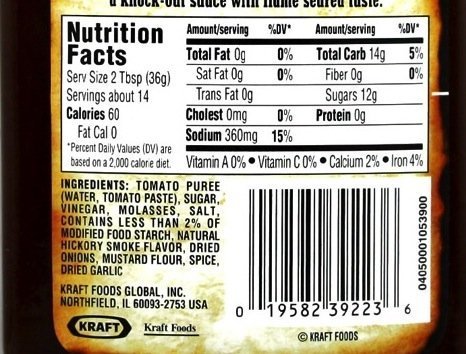 Most desserts are easily identified and eliminated from the diet. These foods are mostly sugar in various forms with complementary flavors added.   Examples include cakes, puddings, cookies, pies, mousses, ice cream, sorbets, candy, and candy bars.
So what is available for dessert? It is best to follow the example of traditional societies. The best desserts are fresh seasonal fruits, preferably locally grown. A bowl of seasonal berries or cherries with whipped cream is a delicious way to end a meal. A small plate of nuts and cheeses also produces a very satisfying end to a meal, without the burden of the added sugars.  Certainly there are naturally occurring sugars, but these do not present the same danger as added sugars.
Dark chocolate with more than 70% cacao, in moderation, is a surprisingly healthy treat. The chocolate itself is made from cocoa beans and does not naturally contain sugar, but most milk chocolate contains large amounts of sugar. Dark and semisweet chocolate contain less sugar than milk or white chocolate. Dark chocolate also contains significant amounts of fibre and antioxidants such as polyphenols and flavanols. Studies on dark chocolate consumption confirm they may help reduce blood pressure, insulin resistance and heart disease. Most milk chocolates, by contrast are little more than candies. The cacao component is too small to be of benefit.
Nuts are a great choice for an after dinner indulgence. Most nuts are full of healthful monounsaturated fats, have little or no carbohydrates, and are also high in fibre, increasing the potential health benefits. Macadamia nuts, cashews, and walnuts can all be enjoyed. Furthermore, increased nut consumption has been linked in many studies to better health including less heart disease and diabetes (18). Pistachio nuts, high in the anti-oxidant gamma-tocopherol, vitamins like manganese, calcium, magnesium and selenium, are widely eaten in the Mediterranean diet. A recent Spanish study found that adding 100 pistachios daily improved fasting glucose, insulin and insulin resistance.
That is not to say that sugar cannot be an occasional indulgence. Food has always played a major role in celebrations – birthdays, weddings, graduations, Christmas, Thanksgiving etc. The key word here is occasional.  These are special treats to be enjoyed occasionally.  We celebrate with a birthday cake, not a birthday pork chop.
Dessert is not to be taken every day. But if your goal is weight loss, the first major step is to severely restrict sugar. Replacing sugar with artificial sweeteners is not a good idea either. Since sweeteners also raise insulin as much as sugar, they are equally prone to cause obesity. Sweeteners give the false promise of sweetness without consequence.  We reviewed artificial sweeteners in a previous post.
Continue to The Tyranny of Breakfast – How to Lose Weight V
Start here with Calories I – How Do We Gain Weight?