Complications with refeeding were first described in severely malnourished Americans in Japanese prisoners of war camps in World War 2. It has also been described upon treatment of long standing anorexia nervosa, and alcoholic patients. It is important to have an understanding of these syndromes if you are attempting an extended fast – usually greater than 5-10 days at a time. Re-feeding refers to the period of time immediately after an extended fast when you are just starting to eat again. We’ve touched upon this briefly with ‘how to break a fast’.  The two main syndromes are refeeding syndrome and refeeding edema. 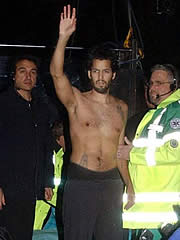 In 2003, David Blaine, the magician, emerged from a 44 day water only fast. Opinions abounded regarding whether or not he was cheating, although he was in plain sight the entire time. Doctors recorded every measurement they could think of afterwards during his hospitalization. He lost 24.5 kg (25% of his body weight) and his body mass index (BMI) dropped from 29 to 21.6. Blood sugars and cholesterols were normal. Free fatty acids were high (expected during fasting).
He developed both refeeding syndrome and edema after this stunt. His phosphorus levels fell and required intravenous replenishment.

Refeeding syndrome has been defined as the “potentially fatal shifts in fluids and electrolytes that may occur in malnourished patients”. The key clinical marker of this is hypophosphatemia – very low phosphorus levels in the blood. However, lowered potassium, calcium, and magnesium in the blood may also play a role. Calcium, phosphorus and magnesium are all primarily intra-cellular ions – that is, they are kept inside the cells and blood levels (which are outside of cells) tend to be quite low compared with concentrations inside cells.
Adults store 500-800 grams of phosphorus in the body. Approximately 80% of the phosphorus in our bodies is held within the skeleton and the rest in soft tissues. Almost all of the phosphorus is inside the cell, rather than outside, in the blood. The blood level of phosphorus is very tightly controlled and if it goes too high or low, can cause real problems. Average daily intake of phosphorus is 1g/day, meaning that it often requires many months of undernutrition to produce these syndromes. Protein rich foods, as well as grains and nuts are good sources of phosphorus. 60-70% of the phosphorus is absorbed, mostly in the small intestine. 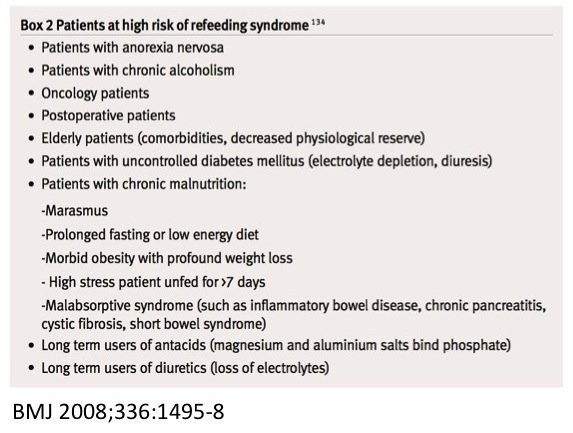 Much of the calcium, phosphorus and magnesium in our bodies is stored in the bones. If the body needs more or these intracellular ions, it will take it from the bone ‘stores’. If there is too much, these get deposited into the bone.
During prolonged malnutrition, blood levels of phosphorus remain normal and the deficit is taken from the bones. This can last for a very long time, as was proven with severe malnutrition imposed on the Japanese prisoners of war during World War 2.
But there are some problems that can happen once food is given, particularly carbohydrate containing foods. During the refeeding period, insulin and other hormones are activated. This causes the movement of the major intracellular ions (phosphorus, potassium, calcium and magnesium) into the cells. However, due to overall depletion of body stores, this becomes excessive and too little of these ions are left in the blood. This is what causes the major symptoms of the refeeding syndrome, some of which are rarely fatal.
Phosphorus is used in all cells for energy. The basic unit of energy (ATP) contains 3 phosphorus molecules so severe depletion of phosphorus may cause your entire body to ‘power down’. This typically happens when the serum phosphorus level drops below 0.30 mmol/L. The symptoms include muscle weakness as well as breathing difficulty as the diaphragm (the large muscle powering the lungs) weakens. Outright muscle breakdown (rhabdomyolysis) has been described, as well as heart dysfunction (cardiomyopathy).
Magnesium is a co-factor in most enzyme systems in the body and severe depletion can result in cramps, confusion, tremor, tetany and occasionally, seizures. Cardiac rhythm abnormalities are also described – classically the pattern known as Torsades de Point. Most magnesium (about 70%) taken orally is not absorbed but excreted unchanged in the feces.
Potassium may also be shifted into cells, leaving dangerously low levels in the blood. This, too can cause heart rhythm disturbances or even outright cardiac arrest. 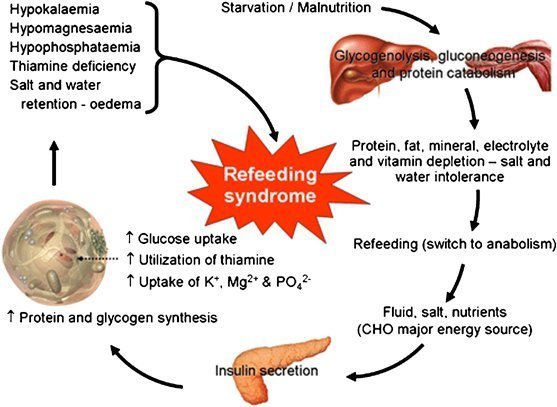 Insulin stimulates glycogen, fat and protein synthesis which requires many ions like phosphorus, magnesium, and cofactors like thiamine. The insulin surge puts an enormous demand on phosphorus stores which have been depleted. In essence, the stores of all these intracellular ions has been severely depleted and once the signal is given to replenish, too much phosphorus is taken out of the blood leading to excessively low levels.
So you can see that one of the key pre-requisites for refeeding syndrome is severe, prolonged malnutrition. How common is it? A study of over 10,000 hospitalized patients only found an incidence of 0.43%. These are the sickest of sick people, but still was found rarely. This is actually on overestimate since it also included diabetic ketoacidosis, which is a different mechanism entirely. The main groups that had this disease? Severe malnourishment and alcoholics.
Refeeding syndrome is most often described in the situation of parenteral (intravenous) refeeding in the intensive care unit. These patients are often intubated and cannot eat for weeks. In the setting of relative malnourishment, extremely calorically dense and nutrient rich fluids are introduced directly into the vein. A setup for re-feeding syndrome.
The main risk factor for re-feeding syndrome is prolonged malnutrition. When we use fasting as a therapeutic tool, most people have never missed a single meal in over 25 years! This is hardly the situation that we deal with currently. However, it is important to understand that patients that are severely underweight or malnourished should not fast. This is important because re-feeding syndrome is mostly found in the condition of starvation (uncontrolled, involuntary restriction of food) or wasting (starvation to the point of severe malnutrition) rather than fasting (controlled, voluntary restriction of food).
Vitamin deficiencies have also been described, again mostly with prolonged malnutrition. The most important is thiamine, which is an essential coenzyme in carbohydrate metabolism. Typically, this has been described in alcoholics with the syndromes of Wernicke’s encephalopathy (ataxia, confusion, visual disturbances) and Korsakoff’s syndrome (memory loss and confabulation). Confabulation is a symptom whereby people have a complete lack of short term memory. They therefore ‘make up’ everything when they are talking because they have no memory. There is no intent to deceive. Traditionally, it has been taught to treat alcoholics and other malnourished people with thiamine (intravenous if needed) before treating hypoglycaemia. Theoretically, the glucose may stimulate acute thiamine uptake and precipitating Wernicke’s.

In extreme cases, you may actually see gross edema. This can occur as the legs and feet start to become very swollen. Occasionally retention of fluid in the lungs leads to congestive failure in those with heart disease.This has been called”refeeding edema”.

Obviously the mainstay of treatment is prevention. Box 3 identifies those at risk of re-feeding syndrome. Obviously the key is to avoid fasting a malnourished person, but that should have been pretty obvious already.

The mainstay of treatment is to start feeds very slowly. Generally this means 50% of the needed food intake with slow increase in rate if no problems are found. This is reflected in the traditional advice to break a fast gently. This is more important the longer the duration of the fasting period. We have often seen people who eat too much as soon as the fasting period is over. Most complain that the food gives them a stomach-ache, but this usually passes quite quickly. I’ve never seen or treated re-feeding syndrome personally, and I hope never to need to. 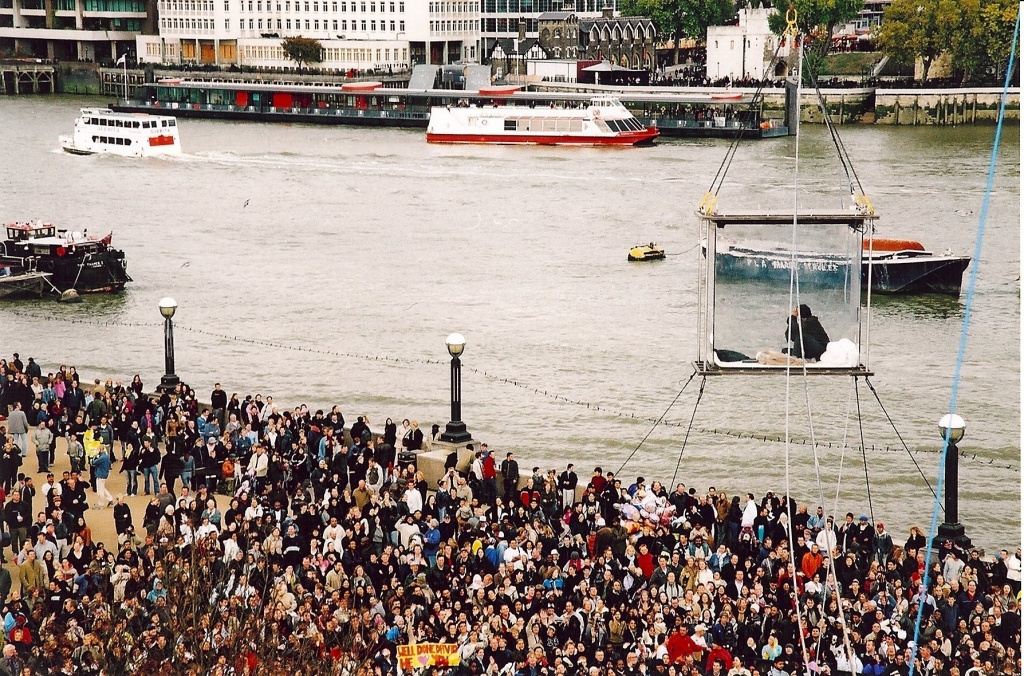 What happened in the Blaine fast?

There were some differences in the fasting done by Blaine and the ones we use in the IDM program. First, it was a water only fast. Generally, we only use those in severe cases. We allow the use of bone broth during fasts, which is not technically a fast, but provides phosphorus and other proteins and electrolytes. This reduces the chances of developing the refeeding syndrome.

Second, you can see that Blaine is suspended in a Plexiglas box for the duration of his fast. He is not able to do any of his usual activities and does not even stand up for 44 days. This is far more than a fast. His muscles and bones will actually develop significant atrophy during that period. He was losing far more than fat. He lost significant lean weight – muscle and bone, but this was NOT due to fasting. It was due to being cooped up in a box for 44 days.

During fasting, we encourage our patients to do all their usual activities, especially their exercise program. This helps to maintain their muscles and bones.