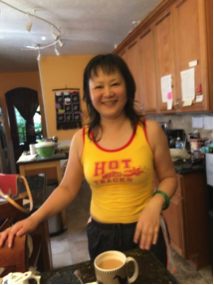 Dr. Jason Fung: I received a letter from reader Sarah, who has successfully used a Low Carbohydrate High Fat (LCHF) diet and Intermittent Fasting (IF) to reverse her type 2 diabetes. Interestingly, she is not particularly overweight as measured by Body Mass Index, yet still suffered from T2D. At her heaviest, she only had a BMI of 24.9, which puts her in the ‘normal’ range. She writes:
Sarah: I immigrated to US from China in the end of 1998 when I was 31 years old; I weighed about 55kg (121 lbs.). While I was in China, I lived thousands miles away from my family, so I had sort of intermittent fasting life style from age 19 to 31 years old.The meal was mostly vegetables and very little protein in China. I had annual physical every year but was never told of any abnormal blood result.
After immigrated to US, my life style suddenly changed from one meal per day to three meals consisted mainly grains with little fat and protein in U.S. I gained about 25 pounds in a couple of years my weight did not continue going up my heaviest weight is about 145 pounds. When I was diagnosed with diabetes in Dec 2004:

I was told to exercise, so I started Yoga shortly after my diagnoses. I lost about 10 pounds and 2 inches form my waist but still required metformin. In the spring of 2005 I relocated to Galveston from Houston in June 2005 because my work as an engineer. My endocrinologist measured my after meal glucose in her office, it was near 200 after 3 hours of my lunch which was only one low fat peta bread. I was devastated, my previous family Dr always told me that if I exercises daily, my blood sugar will come down to normal, so I believed him. I was doing my yoga every day, but I thought that would be enough. 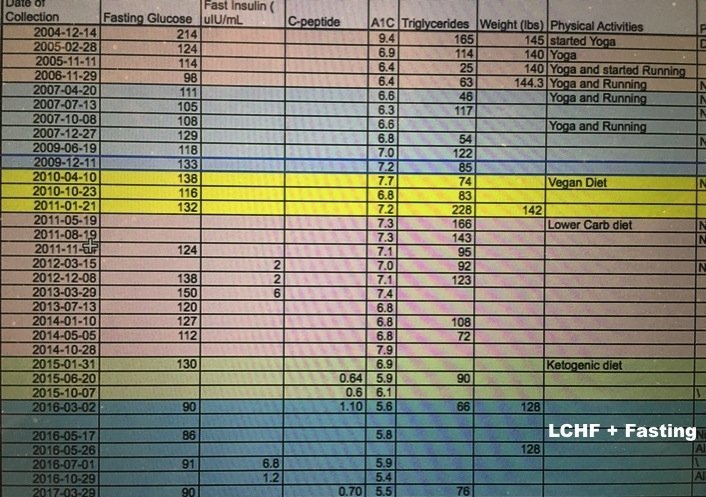 I volunteered to Joslin Diabetes Center’s clinical research in July 2006, and traveled to Boston as a research subject. I had gained about 5 pounds after adding 5 mg of glyburide so I stopped. In Boston, I was told that I need to gain muscle and reduce body fat because my weight was 144.3 lb and my total body fat was 32.3% from DXA result.
After returning to Galveston from Boston, I started to add running and weights, and my weight reduced to 132 lb in a couple of months, and noticed my blood sugar would drop about 100 point (from 240 to 140) in 10 minutes on treadmill. So I keep running about 45 minutes for 5 times a week and doing weights about 20 minutes three time a week, and a couple of hours of yoga every week.
My weight would fluctuate from 132 lb in winter climb to 145 lb in summer my waist would fluctuate from 30 to 31 inches. I watched my carb intake according to American Diabetes Association food plan, and noticed I could never able to consume the carb recommendations without elevate my blood sugar to the roof. As matter of facts, my blood sugar will spike to about 100 points with ¼ of a slice of bread during lunch. I tested over and over, I could not explain. However, I corrected my after meal spikes with running on treadmill for 10 to 15 minutes every lunch.
In about 2nd quarter of 2009, I stated vegan diet which consisted mainly with grains, beans, vegetable only not even eggs or cheese, after watch PBS on one Saturday. Vegan diets supposed to reverse type II based on the vegan promoters. During this period, I noticed my triglycerides had been climb up from 85 to 228, and my thyroid statistics also going up. After I got my lab test from Jan 21 2011, I decided to end my low fat vegan experiment. I started my experiment with one problem, then I ended with more problems. I attended the vegan Dr’s presentation in Houston, and asked him about my triglycerides, he could not explain to me. Though vegan diet did not help me with my diabetes, but I learned valuable information about how to use food as a medicine to help me. I also learned with increase in carbs, my triglycerides will go up which is a bad sign for my heart. 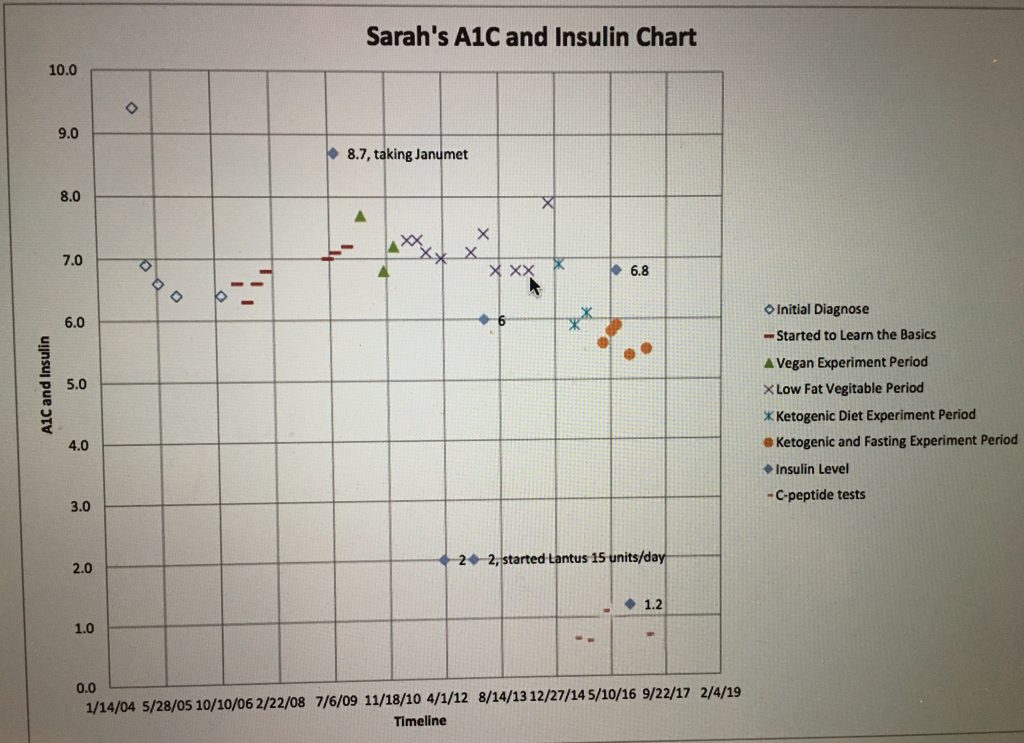 In Feb 2011, I started to experiment with low fat vegetable diet, after about a year, all my coworker and my friends noticed my skin and palm turned into a green yellowish and my hands and feet are cold all the time with swelling. My face swelling every morning and my hands and feet swelling in the afternoon. I realized there is some wrong with my experimental food plan. I was told it is a degenerative disease so I accepted my fate. Continue with low fat vegetable almost no saturated fat diet. Internally, I experienced fatigue every day which I could not explain.
By Oct 2014, my A1C climbed to 7.9, I almost broke down in my endocrinologist’s office. He comforted me and said it is not a big deal, he sees patients with A1C 10 above every day. I am one of his good patients.
I knew the grains triggered my blood sugar spike, so I started eliminate all grains and beans from my diet completely, but I was still afraid of fat especially saturated fat. I bought Dr. Richard Berstein’s books, he stated rib-eye steak is better than the lean steak for diabetes. I was shocked. Fat would give me diarrhea since I was a little girl, so I have been avoid eating any saturated fat all my life. I grew up in food rationing era in China where almost no saturated fat is available from markets beside government stores.
So I started to understand the reasons such as the vegan would never worked for me. It was not dietary fat that caused me to be diabetic. I ate almost no fat my whole life. I added saturated fat such as beef, butter, and coconut oil to my diet, I found DietDoctor web site. Dr. Andreas’s experiments in a diabetes conference meal was very similar with my own experiments. With ketogenic diet, I was able to reduce my A1C from 7.9 (10/28/2014) to 5.9 (6/20/2015) in about 8 months. I kept my carb intake to about 20 grams which mainly came from vegetables. Oct 2015 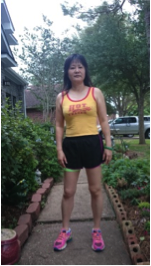 By August 2015, I discovered Dr. Fung through DietDoctor.com. I have been practicing intermittent fasting ever since. By March 2016, my A1C was measured 5.6. I lost total about 12 lbs since I started ketogenic (Nov 2014) my waist is 28.5 inch, and weight 127 to 130 lbs through out a month period. I no longer have swelling on my face, hands, and ankles.
Since I started ketogenic diet, my blood sugar would surge during exercise by about 80 points. For example I would started at 110 before tennis, after 45 minutes my BG would 195. I tested over and over. I tried to use chocolate or cheese before exercising, none of which was able to lower or keep my blood sugar from surge. Out of desperation, I took a teaspoon of coconut oil then went on exercising, I found my blood sugar is remarkably stable during and after exercising.  Before I found the secret of coconut oil, I could not begin to walk my dogs with blood sugar at 90, because it would surge to near 200, now I can take a teaspoon of coconut oil, then go to do exercising without experience any blood sugar surge. I am no longer depressed being a diabetics.
Dr. Jason Fung: That’s amazing work, Sarah. With these detailed records, you can see how LCHF and IF help even with a so-called ‘thin’ diabetic. Asians tend to get type 2 diabetes at lower BMI than North Americans, with the average Chinese type 2 diabetic having only a BMI of 23.7 at diagnosis, not unlike Sarah. Even with a waist of 31 inches, you can have type 2 diabetes. The important factor here is the intraorganic deposition of fat (inside the liver and pancreas) rather than the total fat mass.
Nevertheless, the pathophysiology of ‘regular’ and ‘thin’ diabetes is similar, and responds equally well to dietary interventions. It’s striking that even 10 years of diabetes on medications can be reversed completely since an A1C of 5.6 without medications defines Sarah as non diabetic. Congratulations!