Saturated fat has been linked to heart disease since the 1960s.  With the realization that trans fats and saturated fats were not similar in any way, researchers strove to separate the effects.  Margarine was one of the major sources of trans fats.  The study “Margarine intake and subsequent heart disease in Men” looked at the risk of heart disease compared to the intake of margarine, using data from the Framingham study, which had prospectively collected data on the entire population of Framingham, Mass.  Comparing margarine consumption with 20 year follow up data, they tabulated the results. 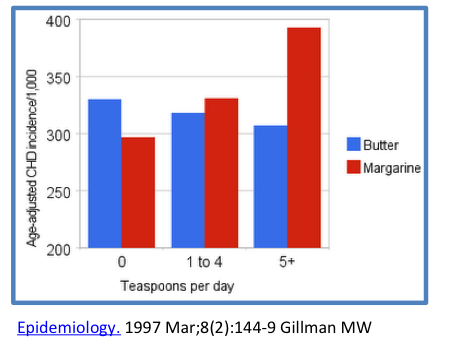 The results were a surprise.  After all, margarine for decades had boasted about being low in saturated fat especially compared to that bovine killer, butter.  Hell, the bestseller Becel was based on the acronym BCL – Blood Cholesterol Lowering.  It had always prided itself on being ‘heart healthy’.
The more ‘heart-healthy’ margarine people ate, the more they got heart attacks.  The more ‘artery-clogging’ butter they ate, the less heart attacks they got.  Wait.  Wasn’t it supposed to be the other way around?
Butter may have been full of saturated fat (which isn’t so bad after all), but margarine was full of trans fats.  Which was worse?  The trans fats were much worse by a country mile.  If trans fats are completely unlike saturated fats, then previous studies that had analysed them together may have come to invalid conclusions.
In order to look at the question of dietary fat aside from the trans fats, Dr. Hu analyzed the large Nurse’s Health Study which followed 80,082 nurses over 14 years. 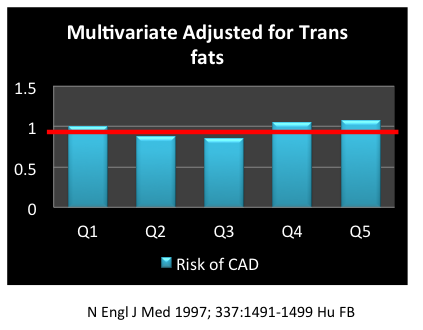 The women were divided into 5 different groups based on their intake of total fats.  The risk of coronary artery disease (CAD) was then monitored for each group.  As the women ate more and more fat, there was no corresponding increase in the risk of heart disease after the effect of trans fats was removed.  The final conclusion of his study was that, “Total fat intake was not significantly related to the risk of coronary disease”.
The same conclusion was reached for dietary cholesterol.  There was no statistical increase in the risk of heart disease with higher consumption of dietary cholesterol.  Remember, too, that previous studies had established that dietary cholesterol contributes little or nothing to blood levels of cholesterol.

Recent analyses have come to much the same conclusions.  In 2009 in the Annals of Internal Medicine, “A Systematic Review of the Evidence Supporting a Causal Link Between Dietary Factors and Coronary Heart Disease” looked at all trials to date for the link.
Looking at all available trials up to 2009, there was no evidence found to support a link between total fat and heart disease.  Saturated fats was not associated.  Neither was polyunsaturated fats.  In other words, there was no link at all.  Saturated fats were not bad.  Polyunsaturated fats (vegetable oils ) were not good.  There was simply no link at all. 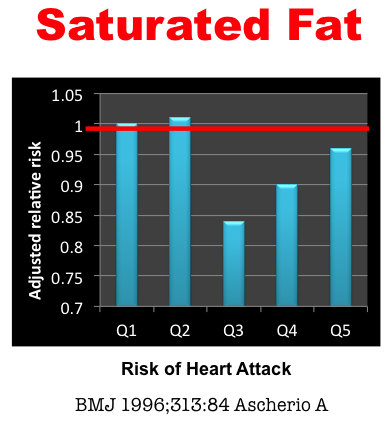 With regards to obesity, there was really no evidence either.  The main concern with dietary fats had always been the ‘epidemic’ of heart disease.  Obesity concerns were kind of ‘thrown in’ as well.  When people decided that dietary fat was bad for the heart, they also reasoned that it must be bad for weight gain as well.  However, there was never any data to support this assumption.  Never assume, kids.  Makes an ASS out of U and ME.
Even the National Cholesterol Education Program admits that “recent prospective studies (or meta-analysis of studies) have failed to detect a causative link between (percentage of dietary fat and obesity)”.  Translation – despite 50 years of trying to prove that dietary fat causes obesity, we still cannot find any evidence.  The reason this data is so hard to find is that it was never there in the first place.
Data slowly started to energy that perhaps saturated fat was not bad for us, but instead was actually good for us.  In the 1996 study “Dietary fat and risk of coronary heart disease in men: cohort follow up study in the United States“, 43,757 health professionals were followed over 10 years and their risk of heart attack was compared to the consumption of saturated fats.  Again, dividing the subjects by amount of saturated fat eaten, there were 5 groups from lowest to highest intake. 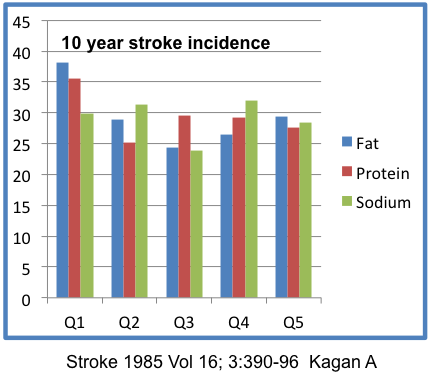 Lo and behold, increased intake of saturated fat was not bad for you, it was good for you.  What’s that crazy talk?  Saturated fat was good for you.  The highest risk of heart disease was in the group with lowest intake of saturated fat.
If we switch gears slightly to talk about risk of stroke, there were several studies on that too.  The Oahu study “Dietary and Other Risk Factors for Stroke in Hawaiian Japanese Men” followed 7,895 men on the island of Oahu over 10 years.  Dietary records were carefully monitored for fat, protein and sodium.
Again, the men were divided into 5 groups depending upon the intakes of fat, protein and sodium separately.  Sodium, or salt has long been demonized as causing high blood pressure therefore increase risk of heart disease and stroke.  It turns out that there really is no correlation at all.  Those taking the most salt had no more risk of stroke than those taking the least.
Both protein and fat showed protective effects.  That is, the more protein and fat one took, the lower the chance of stroke.  Correlation studies such as these cannot prove that fat or protein is protective.  However, they can disprove the hypothesis that fat is bad for us.  If dietary fat was such an important factor in stroke, then there should have at least been some correlation.  But there was not.  The relationship went in the wrong direction. 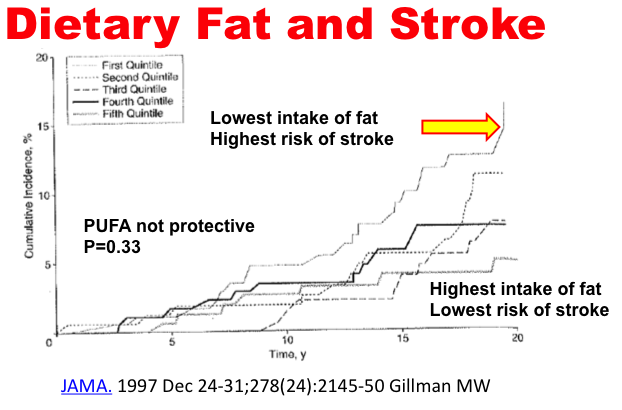 In the 20 year follow up to the Framingham data, the exact same protective effect of fat on stroke was seen.  The 1997 study “Inverse association of dietary fat with development of ischemic stroke in men“.  Dividing the group by intake of dietary fat, it was found that those eating the most fat had the least strokes.  Those with the lowest fat had the most strokes.  Again here, eating fat was not bad, it was good.
Looking more closely into the types of fat, it was found that saturated fats were protective, but that poly-unsaturated fats (vegetable oils) were not.  Those ‘heart-healthy’ vegetable oils were not protective where the ‘unhealthy’ saturated fats were.  Monounsaturated fats (olive oil) was also protective.  Once again, we enter the Bizarro world of nutrition, where good is bad and bad is good.
Continue to Polyunsaturated Fats – Hormonal Obesity XXXVIII
Start here with Calories I – How Do We Gain Weight?
See the entire lecture – The Aetiology of Obesity 6/6 – Fat Phobia