One of the major causes of chronic stress in the modern environment is sleep deprivation and disturbance. Even a single day of sleep deprivation can increase cortisol levels by over 100%. Sleep duration has been declining over the last few decades. In 1910, people slept 9 hours on average. By 1960, surveys indicated that Americans were averaging 8.0-8.9 hours of sleep per night, falling further to 7 hours by 1995. More than 30% of adults between 30 and 64 report less than 6 hours of sleep. Shift workers are especially prone to sleep deprivation and often report less than 5 hours of sleep per day.
Population studies have consistently shown a relationship between short sleep duration and excess weight, generally with less than 7 hours the cutoff. Both cross sectional studies from Spain, Japan and the US, and longitudinal studies such as the Nation Health and nutrition Examination Survey (NHANES I) and the Women’s Health Study finding this association. The Quebec Family Study suggested an increased risk of 27% with shorter sleep duration. A 13-year prospective study even suggested that every extra hour of sleep was associated with a 50% reduction in risk of obesity. A one-year prospective study showed that sleeping less than 5 hours per night was associated with a 91% increase risk of obesity. Sleeping 5-6 hours was associated with at 50% increased risk. A meta-analysis of 696 studies published in 2008 showed that short sleep duration increased the risk of obesity by 55% in adults and 89% in children. For every hour of sleep deprivation, BMI rose by 0.35 kg/m2.
From a caloric expenditure perspective, this does not necessarily make sense. Sleeping less should increase energy expenditure since any activity used more calories than sleep. Calorie theory would suggest that sleep deprivation leads to ‘moving more’ and lower likelihood of obesity. However, the opposite is true, showing once again the inadequacy of caloric theory in general and the ‘eat less, move more’ paradigm.
Sleeping more than 8 hours per night may also increase risk of obesity. The Western New York Health Study also found that sleeping 6-8 hours per night was associated with the lowest risk of obesity. ‘Excessive’ sleeping over 8 hours increased the risk by 60% but too little sleep (<6 hours) tripled the risk of obesity.

Sleep deprivation is a potent psychological stressor and thus stimulates cortisol resulting in both high insulin levels and insulin resistance. Cortisol raises blood sugar and activates the sympathetic nervous system. Sleep deprivation causes increased cortisol levels and sympathetic tone. Sleep deprivation resulted in 37-45% higher cortisol levels by the next evening. Glucose use by the brain decreases during sleep deprivation and likely contributes to the mental fogginess that we all experience. This can be measured by positron emission tomography (PET). Restriction of sleep to 4 hours in healthy volunteers resulted in a 40% decrease in glucose tolerance. The glucose response to breakfast was, in fact, high enough to classify these previously normal individuals as having pre-diabetes. Cortisol increased close to 20%.
Other studies have confirmed that it is possible to induce insulin resistance in normal volunteers simply with sleep restriction to four hours per night, even with a single night. After 6 days of sleep restriction, there was a 50% decrease in insulin sensitivity. In a Japanese study, shortened sleep duration increased risk of type 2 Diabetes.
Both leptin and ghrelin, key hormones in the control of body fatness and appetite show a circadian rhythm and are disrupted by sleep disturbance. Leptin rises slightly during sleep  and ghrelin, the hunger hormone, tends to fall. Thus, hunger is suppressed despite maintenance of the fasting during sleep. The Wisconsin Sleep Cohort Study demonstrated the effects of sleep duration on these important hormones.  The Quebec Family study also found that short sleep duration was associated with higher body weight, decreased leptin and increased ghrelin.
Leptin increases steadily with more sleep. Higher leptin levels regulate body fat downwards making thinner. Ghrelin, the hunger hormone, steadily falls with more sleep. Lower ghrelin causes less hunger. Sleep deprivation results in higher ghrelin and hunger. Sleep deprivation of only 4 hours for two nights increased ghrelin by 28% and reduced leptin by 18% with accompanying increased hunger and appetite (39). Who can deny the ‘late-night munchies’? Fast food restaurants are very familiar with this phenomenon and often now offer 24-hour service. 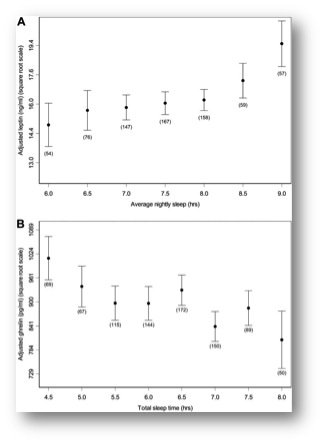 Sleep deprivation clearly will undermine weight loss efforts (40). Adequate sleep is not only essential for restoring brain function, but also to prevent the metabolic consequences of high cortisol and insulin resistance. Interestingly, sleep deprivation under low stress conditions does not decrease leptin or increase hunger. This suggests that it is not the sleep loss per se that is harmful, but the activation of the stress hormones and hunger mechanisms. Getting enough good sleep is essential to any weight loss plan.
Sleep deprivation causes stress. But stress may also cause sleep deprivation. Increased cortisol or prednisone therapy, for instance often causes insomnia due to activation of the sympathetic ‘fight or flight’ system. Patients often describe the sensation of ‘too much energy’. This is a classic vicious cycle. We see this at work in obesity as well. Obesity causes the problem of obstructive sleep apnea, where patients momentarily stop breathing during sleep. Repeated episodes cause tremendous disruption of normal sleep. This sleep deprivation then increases stress, which leads to more obesity.
An interesting natural experiment on sleep deprivation occurred in South Korea. A 10 pm curfew was enforced on late-night tutoring schools. Subsequent studies estimated that each 1 hour increase in sleep duration lead to a 0.56 kg.m2 reduction in BMI and a 4.3% reduction in obesity in the affected grades.
There are several keys to good sleep hygiene, none that involve the use of medications. These disturb the normal sleep architecture, the pattern of REM and non-REM sleep. Simple, but effective ways to improve sleep include:

Continue to How To Lose Weight I
Start with Calories I – How Do We Gain Weight?