One of the most intuitive facts in nutrition is that eating lots of sugar makes you fat. I don’t really think that there is all that much disagreement on this point. There is certainly some argument about why this is true. The calories people claim that this is because it is a source of empty calories. So, therefore, you could eat sugar and skip dinner and not gain weight. These people believe that eating a plate of brownies with some multivitamins and an equal calorie portion of kale salad with salmon is equally fattening.That’s not likely to be true, as common sense would tell you. The calories people claim that since sugar is empty calories, you will then eat more food with nutrition, as if it’s really, really hard to avoid eating nutrient dense foods like liver, calf brains and kale. Hold me back…Can’t resist…The stewed calf brain…. 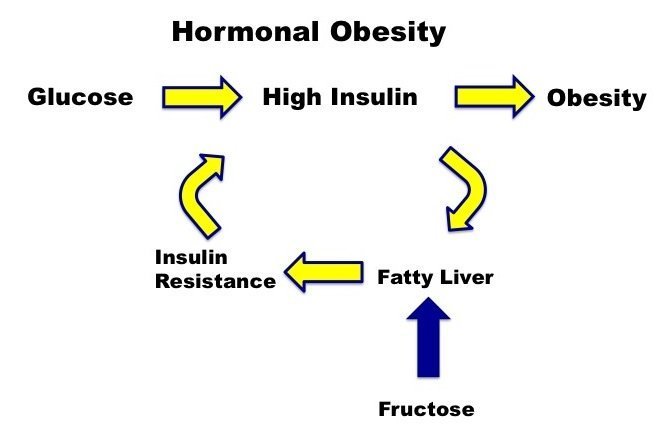 I argue that the fructose is far worse than glucose because it causes fatty liver directly and therefore insulin resistance. This feeds into the vicious cycle of hyperinsulinemia and insulin resistance. I believe that it is the insulin resistance cycle that sets the ‘Body Set Weight’ and to successfully lose weight in the long term, you must address this cycle.
Both glucose (starches) and fructose play a role, but enter the cycle at a different point. If you eat massive amounts of carbohydrates in the form of glucose, it is still possible that you do not develop this vicious cycle if you do not have any fructose. As an example, the Chinese diet of the 1990s was extremely high in white rice (a refined carbohydrate and with lots and lots of glucose) but almost no fructose. They were also not eating 32 meals spaced throughout the day, so they weren’t keep insulin levels high. 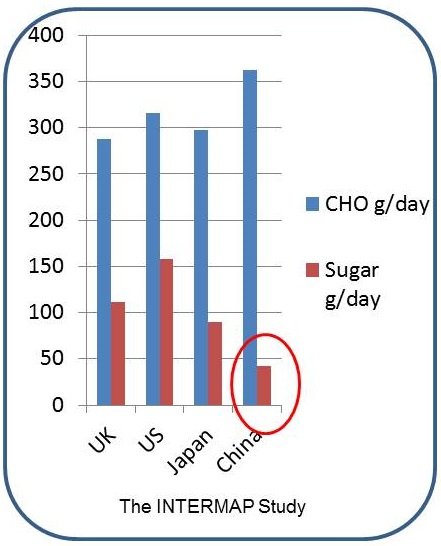 Under this circumstance, there was very little obesity and even less type 2 diabetes. As the diet began to Westernize, and sugar consumption increases, this is simply a recipe for disaster and China has now passed the US in diabetes prevalence.
Since sucrose (table sugar) contains both glucose and fructose, it is especially dangerous. Fructose can only be metabolized by the liver, so 1 pound of sugar has 1/2 pound of both glucose and fructose. The entire body uses the glucose, but only the 5 pounds of liver needs to metabolize the same amount of fructose. Furthermore, the fructose will not be metabolized to glucose in the liver, because the body has just taken in a bunch of glucose. The body does not need any more glucose. Instead, the body will get busy turning that fructose into fat through de novo lipogenesis. Hey presto – fatty liver. Hey presto – insulin resistance. Hey presto – increased body set weight. Hello, diabesity.
So, I believe that fructose is something like 20 times more fattening than glucose (starches), as we discussed last week. So it is not really true when somebody says that eating a bowl of rice is the same as eating a bowl of sugar. A bowl of sugar is more like eating 20 bowls of rice. That is why fructose, specifically, is so, so fattening. That is really why reducing sugar is the most important step in reducing obesity. That is why those true calorie believers are so dangerously ignorant when they say that sugar is no worse than any other calorie. This, of course is the point behind Gary Taube’s excellent new book ‘The Case against Sugar‘. 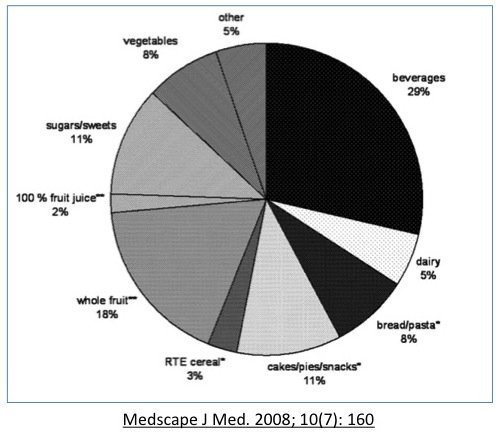 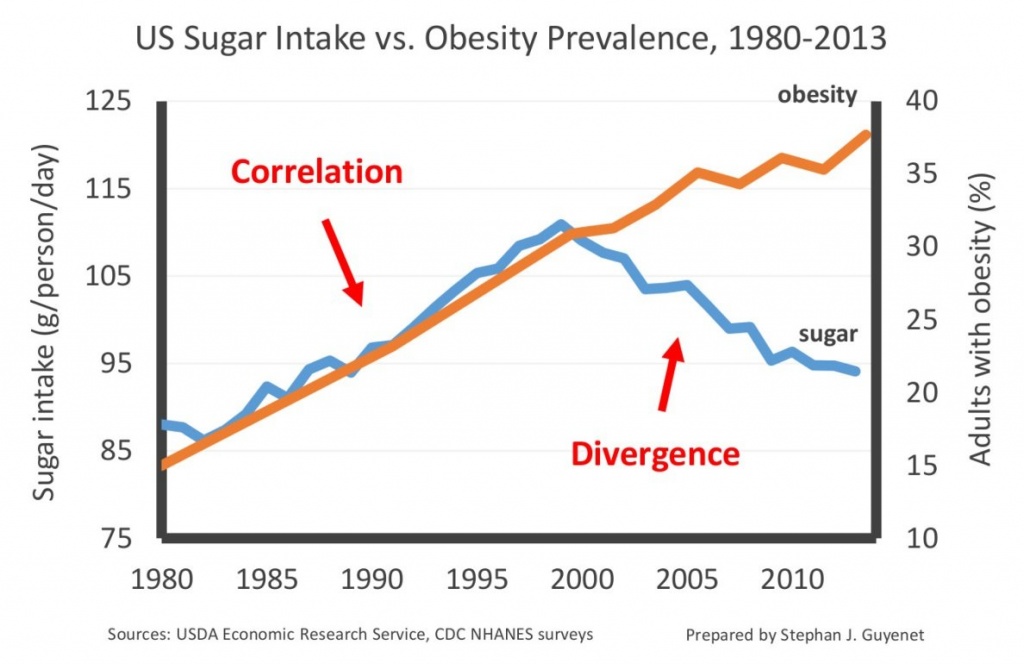 So what are the top sources of fructose in the diet? Beverages is the top source of sugar and should obviously be reduced. But the issue is whole fruit. It makes up a sizeable 18% of dietary intake. Should we reduce it? I confess that I do not have a good answer here. Biochemically, there is no difference between fructose in fruit and fructose in sugar.
However, there are an number of mitigating factors in whole fruit, including fibre. Is it enough? There is no good answer. Epidemiologic evidence does NOT link whole fruit consumption to obesity or diabetes, but that is not quite enough for me to give it a free pass.
Without adequate data, the best answer I can give is this. If whole fruit is the worst that you do in your diet, that’s OK. However, if you need to reduce weight, then consider reducing fruit. Yeah, I know, not a very good answer.
In response to Gary Taube’s book, there have been some who have responded that dietary consumption of sugar peaked and yet obesity continues to go up. This is considered ‘proof’ by some that sugar does not play a large role in the cause of obesity. 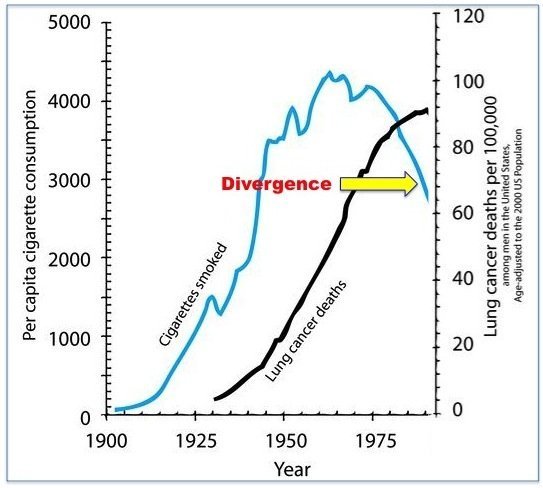 At first glance, this may appear to be true, and is certainly persuasive. However, a closer look reveals the truth.
Let’s look at an analogous case of why smoking doesn’t cause cancer. The relationship between cigarettes and lung cancer. Here’ the graph of cigarette smoking and lung cancer. Well this first graph shows that smoking ‘obviously’ was not a major cause of lung cancer, right? As the number of cigarettes goes down, lung cancer deaths continue to rise. All those anti-smoking people should be ashamed of themselves for all that fear mongering. Jeez. 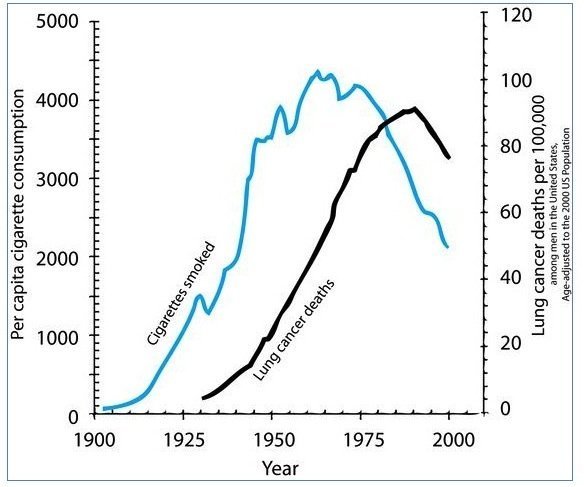 Well, let’s fast forward a few years. Here’s the full graph. There’s simply a time lag between smoking and lung cancer. That’s life. What you can see, when you look closer at the first graph is that the rate of rise of lung cancer death starts to slow as cigarette consumption drops. That’s the first step. 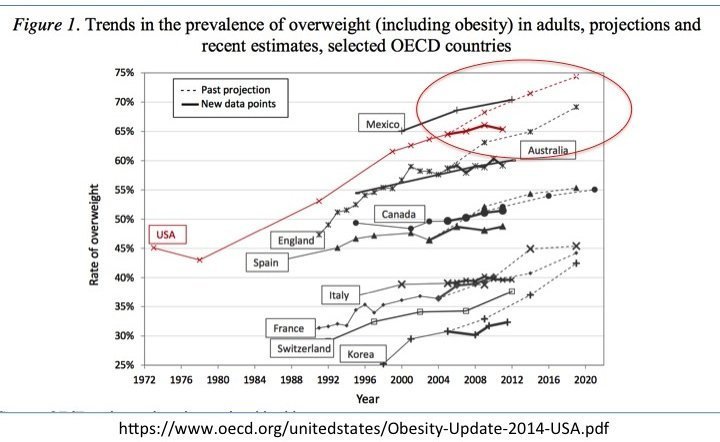 The same is true in sugar. Obesity is a multifactorial disease. Certainly sugar is one of the biggest factors, but not the only one. Reducing sugar doesn’t mean that consumption will go down right away, and the effects may need years or decades to show a difference. That does NOT mean that the hypothesis that sugar is a causal factor is incorrect. Let’s look a bit closer at the data. I’ve put up the graph of obesity from the OECD and the USA data is highlighted in red.
You can see that after the year 2000 there are two lines. The bolded line shows the actual incidence of obesity. The dotted line shows the past projection of obesity. In other words, the data clearly show that the rate or rise of obesity has clearly slowed.
Obesity was rising at a fast rate from 1977 to 2000. There is a momentous inflection point right at the year 2000. Obesity slows. Why? What happened? The Y2K bug? No. Sugar consumption peaked and then fell. The growth of obesity slows down.