I first met Sunny in September 2015 in the Intensive Dietary Management program. Sunny, aged 51 had been diagnosed as a type 2 diabetic since the mid 1990s when he was only in his 30s. He was initially started on the medication Metformin for diabetes. Over the years, he required more and more medications to control his blood sugars. By 2011 he was prescribed insulin. By the time I saw him, he was taking maximal doses of Metformin in addition to injecting 70 units of insulin every day.
Despite this large dose of medication his sugars were still sub-optimally controlled with a haemoglobin A1C of 7.2%. This blood test reflects the three-month average of blood sugars. Optimal control is defined as less than 7.0%, although many physicians recommend getting the A1C to less than 6.5%.
Sunny participated in our IDM program starting October 2nd, 2015. He changed to a diet low in refined carbohydrates and high in natural fats. In addition, we asked him to fast three days a week for 36-42 hours each. If he finished dinner on Day 1, he would not eat again until lunch of Day 3.
His blood sugars improved immediately. In a short two weeks, all of his insulin was discontinued. One month after that, we stopped all his diabetic medications entirely. He has since maintained normal blood sugars without any medications and managed entirely by dietary measures.
Over the Christmas holiday period, he, like many patients in our program did gain weight and his blood sugars did increase slightly. However, with the resumption of his diet and intermittent fasting, his weight and blood sugars reduced and he did not require medications. 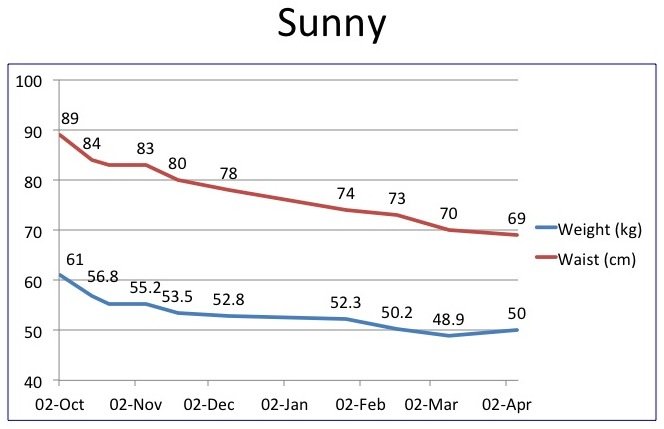 By March 2016, his weight had stabilized and his body mass index was only 18.5. He did not need any more weight loss, so his fasting regimen was reduced to 24 hours of fasting three times a week as maintenance. Of course, if he had dietary indiscretions or if his blood sugars or weight started to rise, he could easily increase his fasting again as needed.
More importantly, his waist size came down dramatically. The waist size is a good reflection of the fat that is carried around the organs of the abdomen. This more accurately reflects the body’s metabolic state. Measures of waist size such as the waist/hip ratio or waist/ height ratio are considered better predictors of health than simple body weight.
Even more remarkably, his kidney function started to improve. When he started, he was spilling a small amount of protein in his urine. His microalbumin/creatinine ratio was 13.8, well above the normal limit of 2.0. This protein in the urine is the first sign of diabetic damage to the kidney and is often considered irreversible, just as type 2 diabetes itself is considered irreversible. By November, his protein excretion in the urine had fallen to 0.4, well within the normal range where it has remained ever since.
Sunny felt remarkable well throughout his entire journey. He had no difficulty maintaining his low carbohydrate diet or the intermittent fasting protocols. He had been injecting himself twice daily for five years and taking diabetic medications for over twenty years. Now he was free of this dreaded disease in a few short months of the proper diet and the addition of intermittent fasting. His blood sugars now classify him as pre-diabetic, not a full fledged diabetic. His disease had reversed
But that is not the end of the story.

In January 2016, Cherie, Sunny’s older sister was astonished at how well her younger brother was doing. His weight was down. His waist size was down. He had stopped all his diabetic medications. He didn’t even find the lifestyle change very difficult. His 20 years of diabetes had been reversed almost overnight. Cherie wanted in.
Cherie was 55 years old and had been diagnosed with type 2 diabetes seven years earlier at age 48. Once again, her story was similar to her brother’s. She had started off with a small dose of a single medication for diabetes. Over the years, her medication pile had slowly grown. She was now taking three medications for diabetes, along with a cholesterol medication, blood pressure medication, and something for heartburn as well.
We discussed her situation and together decided upon a dietary plan for her. She would change to a diet low in refined carbohydrates and high in natural fats. She was a little less sure of how she would feel during fasting, so we decided upon a 24-hour fasting period three times per week. Her diabetes was not as severe as her brother, and she could always increase her fasting if necessary, but to start, she would only do 24 hours at a time.

She started our program in February 2016. Her blood sugars responded immediately. Within two weeks, she had stopped all three of her diabetic medications, as they were no longer necessary. Her blood sugars now consistently measured in the normal range. Her weight began a steady decline, as did her waist size.
Her heartburn disappeared so she stopped her heartburn medication. Her blood pressure normalized, so she stopped her blood pressure medication. Her cholesterol numbers were improved so she stopped her cholesterol medications. Within a single month, she stopped all six of her medications, yet her blood work was better than ever. Her haemoglobin A1C of 6.2% was better than when she was taking all three diabetes medications. She was no longer considered diabetic, only pre-diabetic. This meant that her disease was reversing.
Furthermore, she felt extremely well during this entire process. She did not have any trouble with the fasting protocol. While her fasting period was shorter, she was still getting excellent results so there was no need to change it. She had been taking six medications at the beginning. Now she was on none, and feeling a hundred times better.
This illustrates an important point. Type 2 diabetes is a dietary disease. As such, the only logical treatment is to fix that diet and lifestyle. If the problem is excessive intake of carbohydrates, then reducing carbohydrates is the answer. If the problem is excessive weight, then successful weight loss with fasting is the answer. Once we fix the underlying issue, the disease reverses.
However, we have been brainwashed to believe that type 2 diabetes and all its complications are inevitable. We have been deceived into believing that we can successfully treat a dietary disease with increasing doses of drugs. When the drugs fail to halt the diabetes, we are told that the disease is chronic and progressive.
Sunny had over 20 years of type 2 diabetes, yet managed to successfully reverse his disease within a matter on months. Cherie had seven years of diabetes medications, and also successfully reversed her disease in a few months. But they are not anomalies. Almost every single day that I go into the IDM program, I meet people of all ages who have reversed or are reversing their type 2 diabetes.