Green tea was discovered in China in approximately 3000 BC. Buddhist priests carried the tea drinking tradition to Japan. Even in ancient times, tea was believed to have many positive qualities. In 1211 AD, the Japanese Zen priest Yeisai published the book ‘Kitcha-Yojoki’ which translated to ‘Tea and Health Promotion’. At the time, civil war had broken out and tea drinking was all but forgotten for two centuries. With peace restored, Yeisai reintroduced the tea plant to Japan.  He wrote about methods of harvesting, production, and also its many beneficial attributes. He proclaimed that tea was a “divine remedy and a supreme gift of heaven”. Where before tea drinking was restricted to nobility and priests, tea drinking now spread to the general population. When the Shogun Sanetomo became unwell from over-feasting, he summoned Yeisai to offer prayers. The Buddhist abbott supplemented his prayers with tea, and after recovery, the shogun became a great tea devotee. Modern science is just now catching up to this ancient wisdom regarding tea’s health benefits.
Green tea contains many chemical compounds that may support healthy blood sugar levels and cardiovascular health. Some studies have shown benefit in adding green tea compounds to the diet as opposed to oolong tea that contains lower levels of catechins, the chemicals thought to be effective for supporting healthy weight management. In one experiment, patients were assigned to two different beverages – oolong tea compared to an enriched green tea. Oolong tea is made from the same tea leaves, but the fermentation process changes many of the catechins to theaflavins instead. Oolong tea is the most widely sold tea in Japan. The green tea contains larger amounts of catechins, but this amount was enriched by concentrating some of the catechins.

As you can see from the results, green tea may help support healthy weight maintenance as well as healthy metabolism.
As part of a healthy lifestyle, supporting a healthy body fat percentage and waist circumference would be expected to have a beneficial effect on overall health. Indeed, the same researchers as the first study undertook a 2009 study to determine the effects of a catechin enriched green tea in a randomized placebo controlled trial in type 2 diabetic patients who were not taking insulin. 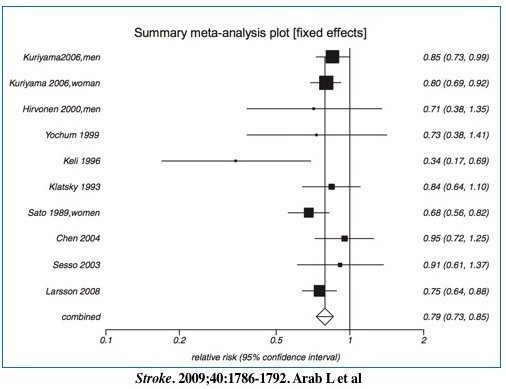 Despite wide variation in tea consumption and across 6 countries, there was a consistent beneficial association between tea drinking and support of healthy cardiovascular function. One mechanism  involves theanine, an amino acid found in high concentrations in tea leaves (and coming almost exclusively from Camellia sinensis). Theanine is easily absorbed into the body, crosses the blood brain barrier, and supports a healthy circulatory system.
The other major area where green tea catechins may help is in supporting healthy cellular function.
These benefits are likely quite small, but the risks are equally small. Given the relatively low cost of drinking tea, this makes tea drinking, along with fasting, one of the cheapest, easiest and most powerful ‘bio hacks’ around.