Tea is the second most popular beverage in the world, second only to water. It is classified by level of fermentation into black tea, drunk mostly in Europe, North America and North Africa, oolong tea and green tea, drunk mostly in Asia. The beneficial effects are largely thought to be due to the polyphenols, which are the natural antioxidants found in tea. Green tea is particularly high in catechins, also known as tea flavonoids, which may support healthy heart function, by acting as antioxidants.. It is also useful in supporting healthy appetite and an aid for fasting. At our Intensive Dietary Management fasting program, we recommend tea often for these benefits.
The benefits of tea are largely found in epidemiological studies, which are problematic, to say the least. However, it is impossible to randomize people in a 10-20 years trial because it’s crazy expensive. The benefits of tea, while highly suggestive, is not definitive. Tea is high in phytonutrients, containing minerals, antioxidants and amino acids. The nations of East Asia, like Japan and China are among the largest drinkers of tea in the world. Perhaps not coincidentally, they also have some of the highest life expectancies in the world.
As noted in a previous post, the large Dutch cohort from the EPIC trial found tea may support healthy heart function with 3-6 cups per day. The 2002 Rotterdam study was a prospective study of aging in 4807 patients followed over an average of 5.6 years.  found tea may support healthy cardiovascular function in tea drinkers versus non tea drinkers. 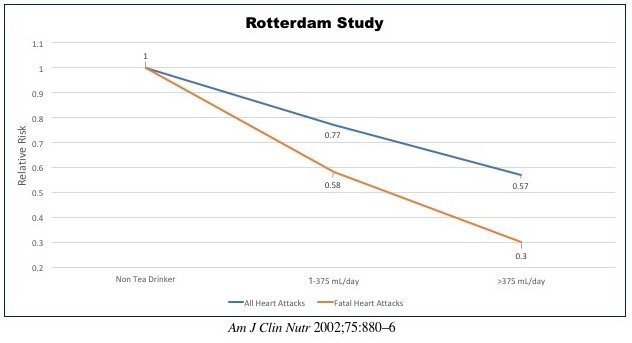 Some studies find less heart health support with black tea compared to green tea. A meta analysis suggests that each additional cup of green tea drunk per day boosts the supporting effects by 1-18%. This may be explained by the higher catechins in green tea as opposed to black tea.
Again, there may be a difference between the types of tea – green versus black. Studies primarily from European populations tend to drink black tea. Drinking 3 -6 cups per day sounds pretty daunting but there are some important things to keep in mind. Green tea generally has much higher levels of the catechin that are believed to be beneficial. So it may not be necessary to drink that much green tea in comparison. Secondly, even when drinking black tea or oolong tea, there’s a difference between the way it’s drunk in Asia and in the West.
In Toronto, Canada, where I live, people often buy tea from the coffee shop. They pay $1.50 or so for a tea bag and some hot water and drink it in much the same manner as coffee. It’s something you purchase to drink. If you drink 6 cups a day, as done in some of these studies, you would be shelling out $9 per day, just to drink tea. That’s not the way it’s done in Asia. My parents are from China, and I grew up drinking tea like water. A tea pot full of tea leaves was steeped over and over again and whenever you are thirsty, you would pour yourself some tea. I drank mostly oolong growing up. Now I’ve switched to green tea. At restaurants, it’s the same thing. When people go out for lunch ‘yum cha’, it means literally ‘to drink tea’. A pot of tea is kept on the table and the waiter would keep refilling it with hot water as needed. Everybody at the table keeps drinking tea throughout the entire meal. At many homes, people do the same. Instead of getting a glass of water with dinner, they might refill the tea pot and drink some hot tea. 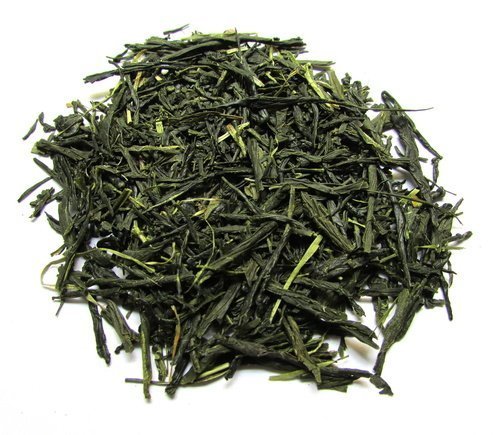 What’s the result? Tea is the default drink throughout the day. In the West, water is generally the default drink, and if we want something else, we’ll drink coffee or tea. In Asia, the default drink is tea, and therefore you can easily drink 6 or 8 cups a day without even thinking about it, where North Americans may drink 6-8 glasses of water instead. That’s the best case scenario. Many children would drink sugary sodas or fruit juices instead.
There’s another important difference in tea drinking in the East and West. Traditionally, in the East, you generally drink tea ‘straight’ and do not add sugar or cream/ milk to your tea. Modern Asia has changed, with many tea houses now blending teas with a variety of flavours, cream/ milk and sugar. For sure, adding sugar and other flavours is bad, but what about milk?
In the United Kingdom, it is estimated that 99% of tea drinkers add milk to their tea. Does this make a difference? Flavonoids are bound to protein and adding milk may abolish much of the antioxidant effect. The flavonol quercetin, found in green and black tea, onions and red wine, is reported to reduce the oxidation of LDL cholesterol and block platelet aggregation that may reduce heart disease. The Caerphilly study followed residents of the town of Caerphilly in South Wales and compared heart health to intake of flavonols. Tea provide 82% of the flavonols and onions 10%. In this study, there was no difference in heart health with increased tea drinking, in contrast to several other studies. There was one potentially important difference between tea drinking in the UK and other parts of the world including the Netherlands. In this sample, 99% of tea drinkers added milk whereas this practice is (was) rare in places such as Asia. There is some experimental data that milk proteins may bind the flavonols and prevent full absorption by the body. One experiment showed that adding milk to tea completely blocked the antioxidant effect of black tea.
Because tea is so widely consumed, the potential for supporting health is immense.
Once again, the bottom line is relatively simple. There are many potential benefits for supporting healthy heart function. The potential risks are virtually non existent. The cost is low. Drinking tea comes with a very high benefit/risk ratio, so why not do it?