My name is John Somsky, I was born in 1968 and have struggled with my weight my entire life. I went on my first diet when I was in the second grade. I’ve tried nearly every diet imaginable and have literally lost hundreds of pounds on these diets over the course of my life. And with each diet I’ve eventually gained back everything I lost with a little extra for good measure.
I’ve always thought of myself as “the fat kid”, which has been frustrating and a source of shame for me. As a child, I always needed to order the largest shirt available when participating in extra-curricular activities and I had to shop in the “husky” section for jeans. I was always very aware of my extra weight. Despite being fairly short, I wrestled in the 168-pound weight class as a sophomore in high school when I should have been at least 30 pounds lighter. I was even happy when I managed to lose 20 pounds and got down to a still obese 210 pounds one summer during college. And I considered it a victory when I was able to get down to 275 pounds when I got married in 2002. Each “success” was heavier than ones in years before and emphasized the overall trend of failure. 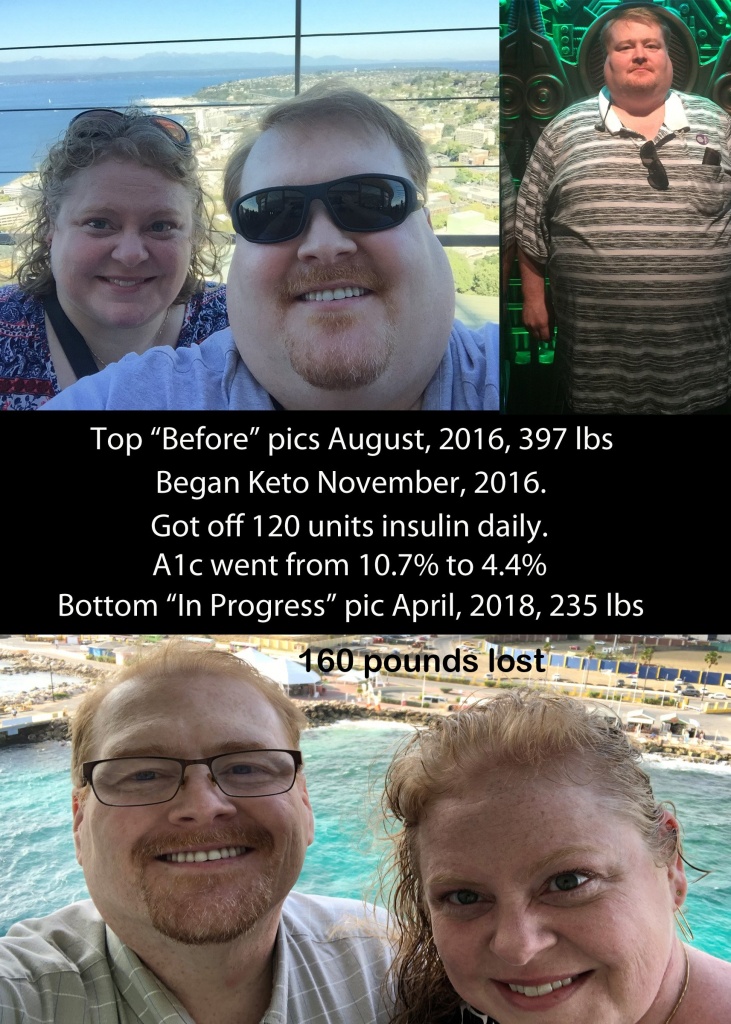 Before I got married I followed the Atkins diet for a couple of years. I felt better on this diet than any other and I had the most control over my hunger. However, I did stall toward the end after a year or so and that decreased my motivation. As a result, I decided to stop the Atkins diet “temporarily” for my honeymoon, but It would be years before I ever took low-carb seriously again.
In 2008 I was diagnosed with diabetes and started taking metformin. I dabbled with lower carb diets over the next few years, but I didn’t stay on them for very long and I wasn’t very disciplined. By 2015 my blood sugar was out of control, my A1C was 10.7% and my doctor gave me a few months to try to get it under control before more drastic measures would be taken. After 5 months of half-hearted attempts to lower my carb intake, I only managed to lower it to 10.6%. So in December of 2015, my doctor prescribed Lantus, a long acting insulin, to help control my blood sugar.
It took 120 units a day of insulin to control my blood sugars. With the addition of the insulin, my A1C bounced from 6.6% to 7.9% for the next few months. During this time my weight was increasing at a rapid pace and the extra weight was placing extra stress on my joints. I couldn’t stand for more than 20-30 minutes without extreme discomfort in my back and my energy level was at an all-time low. I was also feeling lots of aches and pains in my joints, particularly in my knees.
Around June of 2016, I started to listen to the 2 Keto Dudes podcast and thought that maybe a ketogenic diet would be my next attempt at a low carb diet. I started to learn as much information as I could and began to prepare myself for making a permanent lifestyle change as opposed to another temporary diet.
In late October I stepped on the scaled and weighed 397 pounds. That was the last straw. I did not want to break the 400-pound mark! So on November 1, 2016 I started my keto diet. My doctor was supportive and we came up with a plan for me to monitor my blood sugar and decrease my insulin as necessary, although I’m not sure he actually believed I would be able to stop the insulin. As it turns out, by March of 2017 I was completely off my insulin and had lost 30 pounds. And in April of that year, I got even better news, my A1C was down to 7.0, which was as good as the insulin was able to maintain it. 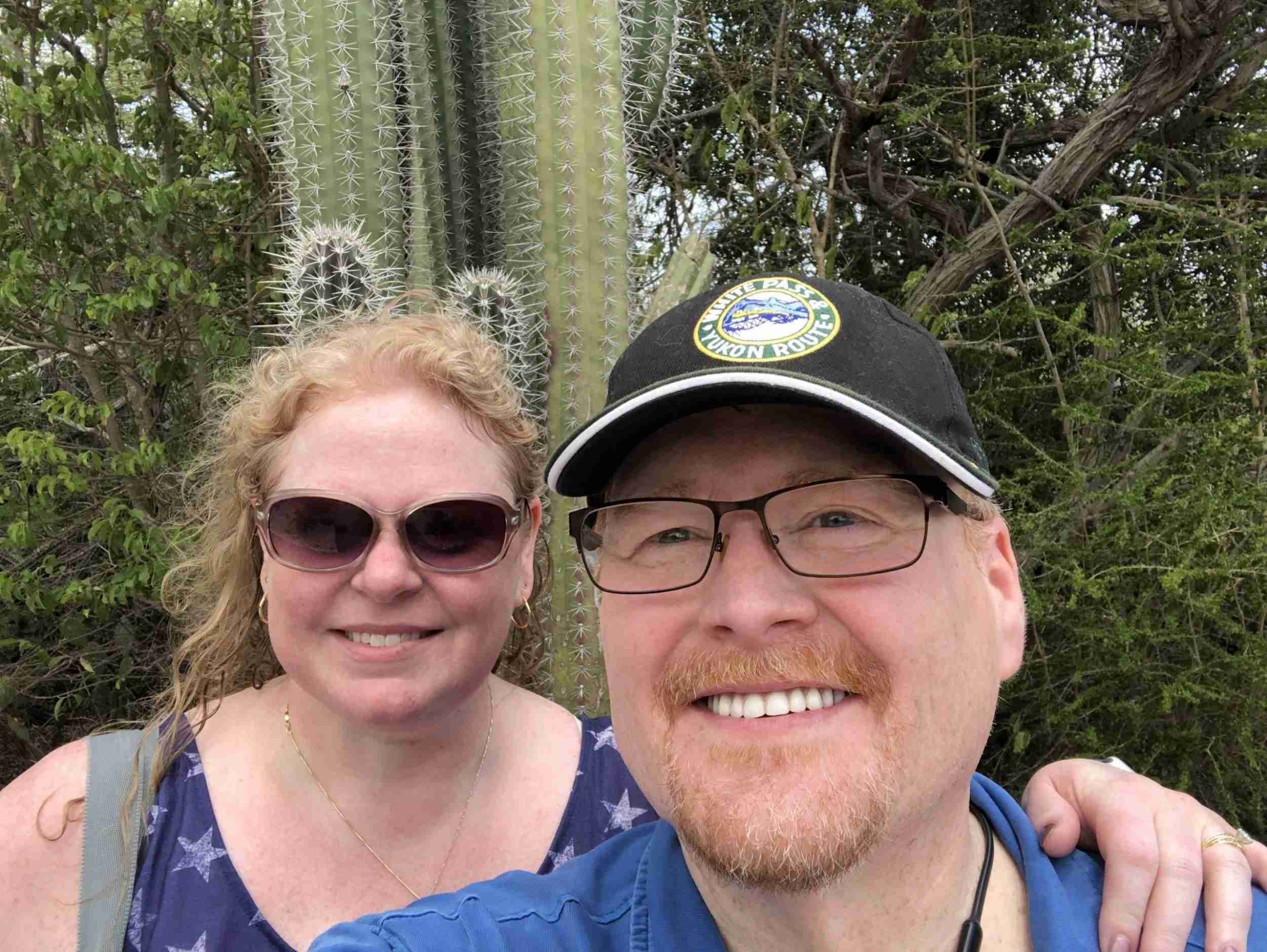 In May of 2017 I participated in my first extended fast, thanks to the support of Brenda Zorn and the ketogenic forums. This lowered my fasting blood sugar by almost 50 points immediately and permanently. It also spurred on even more rapid weight loss. By mid-June I was down to 325 pounds, an over 50-pound loss, and my A1C was 5.5%, the best I’d ever had measured.
In January of 2018, my A1C was an astonishing 4.4% and my weight was down to 265, over 130 pounds lost. Since then I’ve lost another 30 pounds for a total of 160 pounds lost. However, the control of my diabetes and being able to stop injecting insulin is an even bigger win. In addition, I can now stand for hours without pain, can walk for several miles without a problem and my joints no longer ache. My health has improved dramatically and I’m still working on losing more weight. I’d at least like to get to 200 pounds lost overall.
The weight is coming off more slowly now, but I have more control of my hunger than ever before. I feel confident that this is now my new way of life. And with the health improvements I’ve seen I’m looking forward to a long and healthy adventure in the years to come.