There really is no upper limit to fasting regimens. Once again, I will add a cautionary note. If you are taking medications or especially if you have diabetes, you need to discuss this with your physician before starting. The blood sugars often come down with fasting regimens, but if you are taking medications, it may come down too low. This is a potentially fatal condition called hypoglycaemia. It often manifests as shaking, sweating and sometimes seizures. Medications often need to be adjusted including blood sugar and blood pressure medications.
Also, if you feel unwell at any point during the fasting, you must stop. You may feel hungry, but you should not feel faint, or unwell or nauseated. This is not normal and you should not attempt to ‘push through’. I am not specifically recommending any fasting regimens, only trying to document various fasting regimens in widespread use. 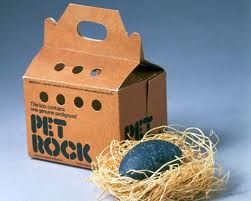 The world record for fasting is 382 days. This was a 27 year old man in Scotland who fasted in order to lose weight. He weight 456 pounds at the start of the fasting period. During this time, he only took a multi-vitamin, and something called ‘Paladac’ which was vitamin C and yeast. Why on earth anybody decided that eating yeast was that important is really quite beyond me, but hey, this was 1973, when pet rocks and disco was popular, too, so there you go.
He was able to drink as much non-caloric fluids as he wanted. After all, you would only survive less than 3 days without fluids because of significant dehydration. At various periods, he did receive some potassium and sodium supplements, and he was monitored by a physician throughout the fasting period to see if there was any deleterious effects on his health. 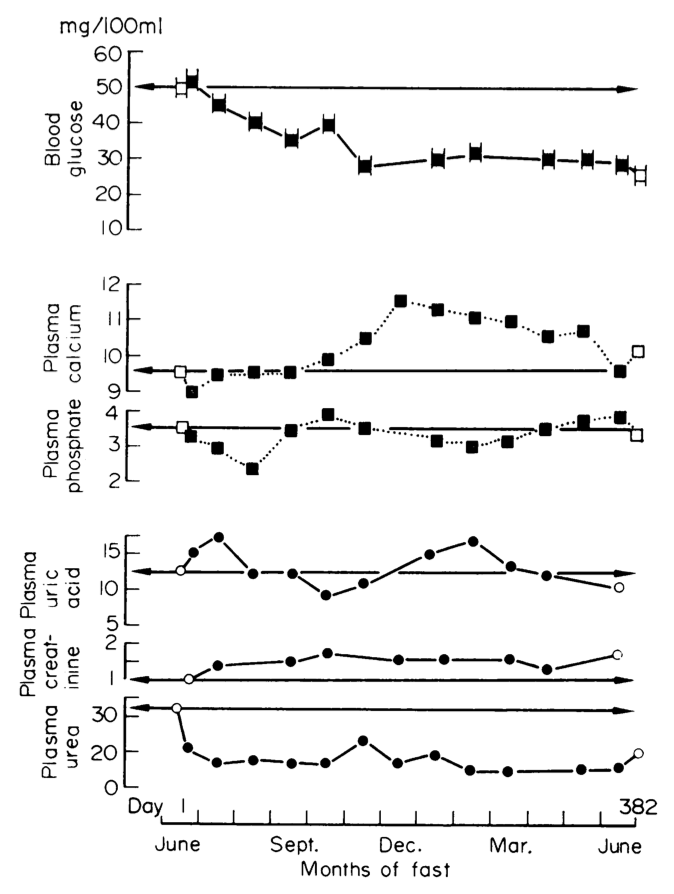 Constipation is one of the main problems we see in fasting. The reason seems simple enough. There is very little going into the gut, so little comes out the other end. This is a problem we face routinely in our IDM clinic. With this world record fast, this patient had bowel movements roughly every 37-48 days. What’s important to note is that this is a normal phenomenon and not an abnormal one. You do not need to have a daily bowel movement to feel well. Nevertheless, less than once a month seems kind of extreme.
His weight decreased from 456 to 180 pounds. Even 5 years afterward, he remained at 196 pounds. One of the most persistent concerns about fasting is the effect on electrolytes. You can see from the accompanying graph that blood sugars do go lower, but remain at the lower limit of normal.  There were no episodes of hypoglycaemia. This is, of course, to be expected, since the body will begin the process of gluconeogenesis (making of new glucose) in order to supply the brain and certain other parts that need glucose (renal medulla and red blood cells). Even the brain is mostly using ketones at this point. As previously shown, muscle is not consumed to provide glucose (gluconeogenesis). Instead, the glycerol backbone from triglycerides (fat) is recycled into glucose while the three fatty acid chains are used for fuel by most of the body. 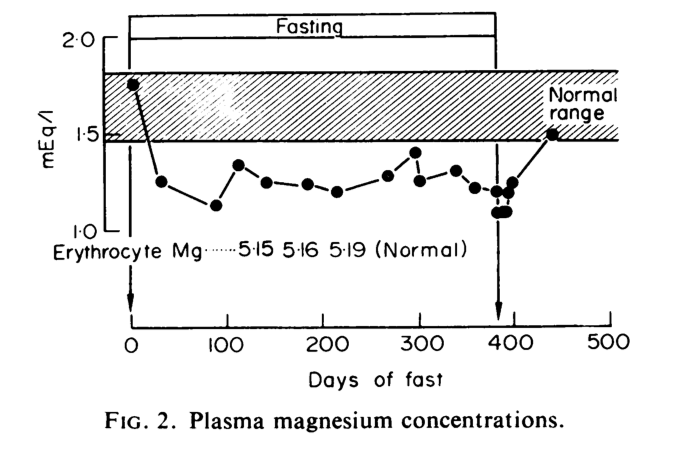 Calcium and phosphorus levels in the blood vary over the fasting duration but generally remain within the normal limits and are virtually unchanged by the end of the fast. The same goes for plasma urea and creatinine, which are widely used measures of kidney function. Sodium, potassium, chloride and bicarbonate were all unchanged and in the normal range. In this study, uric acid remains stable although other studies have shown some increased uric acid.
Serum magnesium levels did decrease in this study. This is consistent with what we see clinically in our clinic as well. It seems to be especially prevalent in diabetics. It is important to realize that 99% of the body’s magnesium is intracellular and not measured by blood levels. In this study, researchers took the next step to measure the magnesium content within the cells and the erythrocyte Mg levels remained firmly in the normal range. Nevertheless, we often supplement with magnesium to be on the safe side.
The rate of weight loss was 0.72 pounds per day averaged over the entire 382 days. Other studies of fasting over 200 days had shown similar rates of weight loss (from 0.41 to 0.67 pounds per day) for periods of 210, 236, 249 and 256 days. This average of 0.565 ((0.41 + 0.72)/2) is actually quite interesting.
We assume that one pound of fat is 3500 calories. This is a widely quoted figure, but not especially accurate. If we assume that one eats 2000 calories per day, then we would expect 2000/3500 = 0.57 pounds weight loss per day, which is fairly close to that number actually seen. So, for a patient with 100 pounds of fat to lose, you might expect that it would take roughly 200 days to lose it all. 200 days! I don’t generally subscribe to calorie theory for the reason the Caloric Reduction results in reduced Caloric Expenditure. In other words, decreasing Calories In decreases Calories Out resulting in a plateau of weight loss efforts.
However, in the case of straight-on fasting, the caloric theory holds as promised, resulting in a weight loss very close to that predicted if Caloric Expenditure stays stable. In other words – metabolism does not decrease in fasting. A prolonged caloric reduction, on the other hand, is shown to decrease metabolism.

I’ve sometimes called Intermittent Fasting the ‘Ancient Secret’ of weight loss. Why do I resort to such Dr. Oz-like hyperbole? Well, because it’s true. It is an ancient technique of weight loss – dating at to the time of the ancient Greeks over 2. So, if you want to talk about time-tested practices, nothing beats fasting. Consider that LowCarb diets such as endorsed by William Banting also have a long history but only dating from the mid 1800’s. Obesity was quite rare in the time of Jesus Christ, so fasting was used as a method of preserving good health and improving mental clarity. 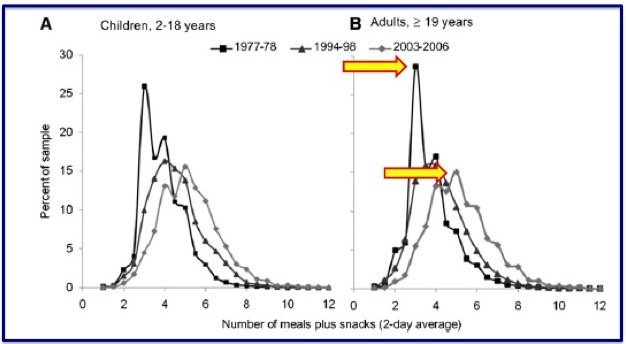 But why is fasting a ‘secret’? Well, because the nutritional authorities have spent the last 30 years convincing us that we need to eat more to lose weight. We’ve all heard these lies.

This last one must be one of the most idiotic myths out there. Fasting is not, like, exactly fun. It’s a hell of a long way from morbid obesity to anorexia. Furthermore, anorexia is a psychologic disorder of body image. Fasting does not lead to anorexia any more than washing your hands leads to obsessive compulsive disorder. But these lies persist. 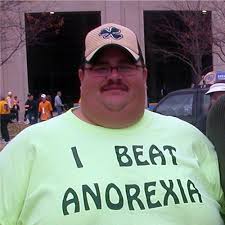 Nevertheless, because of all the worries, you can rest assured that there are studies that show that intermittent fasting does not lead to eating disorders.
Sadly, the public at large has bought into these lies. You can see that from 1977, the vast majority of people ate 3 times a day. By 2003, most people were eating 5-6 times per day. This weight loss advice was as useful as a third nostril.
Much of this increase in eating opportunity is likely to have been funded by Big Food. They want to sell more food. It’s easier to sell more food if people are eating more frequently. So, in order to do that, they needed to make sure that you didn’t ever miss a single meal.
So here’s the bottom line.
Can you fast? Yes – literally millions of people around the world for thousands of years have done it.
Is it unhealthy? No. In fact, it has enormous health benefits, that we have not even touched upon yet.
Will you lose weight? Here is the crazy thing. People have been convinced that fasting will make them gain weight (the bogeyman – starvation mode). OK, Einstein – if you don’t eat anything for 2 weeks, do you think you will lose weight? Of course.
Is it difficult? Not really. Millions of people do it. But it’s not exactly fun, either.
So fasting is effective, simple (one main rule – don’t eat), flexible (lots of different regimens), practical (saves time and money), and virtually guaranteed to work. So why don’t people support it? Because nobody makes money off you when you fast. Only when you buy crazy things like meal replacement shakes. Nobody wants to you to find out the Ancient Secret of Weight Loss.
Start here with Fasting part 1
Continue with Fasting part 9