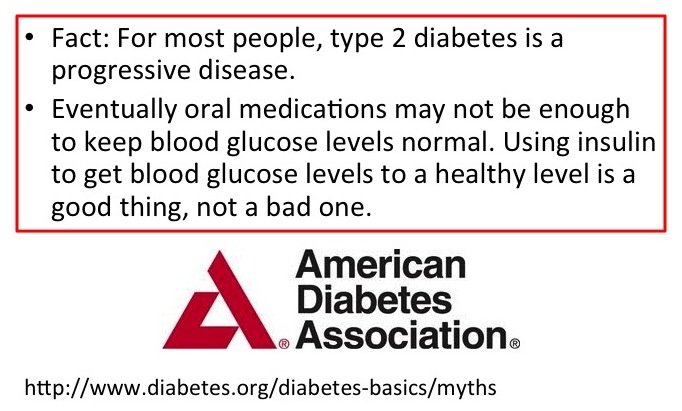 There are many things untruths said about type 2 diabetes (T2D) but the biggest lie of them all is this: T2D is a chronic and progressive disease. This message has been spread so far and wide and repeated so often that people do not even perceive that there is any controversy. Of course it is true. Everybody says so. If you develop T2D, you will have it for life. It will get worse and then you’ll go blind. You will soon be on insulin, get used to it!

In fact, the ‘authorities’ all agree. They have been one of the loudest voices proclaiming T2D a chronic, progressive disease. You had T2D, you can’t get better so don’t even try! It is on the website of the American Diabetes Association and others such as diabetes australia.
A ‘natural progression’ is how diabetes australia puts it. Makes it sound pretty good actually. Don’t worry if you go on insulin, that’s just the way it is. Just accept it. It will get worse, but don’t worry, you can always go on dialysis if your kidneys fail.
There is only one small problem with that statement that T2D is chronic and progressive. It is just not true. It is a purely and simply a lie, and a big one. There are many people that want you to believe this big whopper of a lie. There is money to be made and shareholders to keep happy. And it certainly won’t do if you find out that T2D is actually a fully reversible, curable, dietary disease. How can you sell drugs if people stop getting the disease? 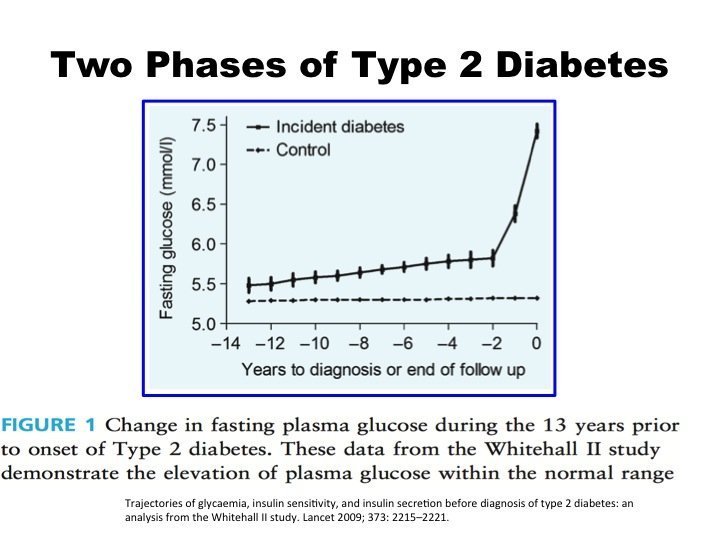 So where does this idea come from? Let’s back up a bit and explore this in detail.
T2D is a disease that is characterized by high blood sugars or blood glucose (BG). In type 1 diabetes, the BG rises due to a lack of insulin to push this BG out of the blood and into the cells.
However, T2D is not a lack of insulin. Rather, insulin levels are quite high and the problem is felt to be due to insulin resistance. That is, there is plenty of insulin around, but it doesn’t seem to work very well. 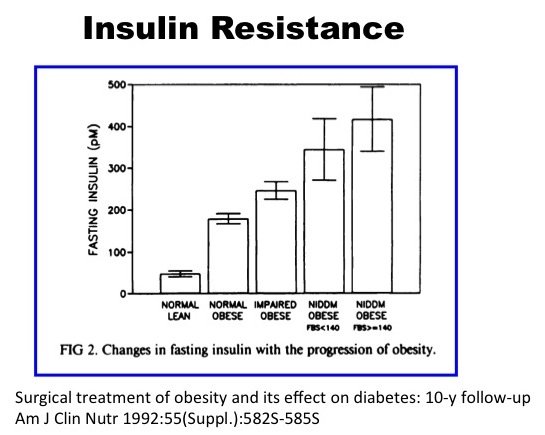 If you look above at the natural history of type 2 diabetes, you can see that there are two phases. There is a gentle rise in blood sugars almost 15 years before the diagnosis of T2D. This parallels the increase in insulin resistance.
As people become obese, the insulin resistance develops over time. This is also in evidence as pre diabetes or impaired fasting glucose develops. From the accompanying figure, you can see that as you measure normal, lean people to obese to T2D, the insulin resistance progressively goes up. The reason for this progression we have covered previously in our posts on insulin resistance.
Essentially, persistent high levels of insulin lead to the development of insulin resistance (IR). This high IR leads to higher insulin levels to ‘overcome’ this IR. However, in the long term, this higher insulin only leads to higher IR. This is a vicious cycle, and the longer you go round it, the worse it gets. This is the so-called time dependency of obesity. This high insulin, of course leads to obesity. 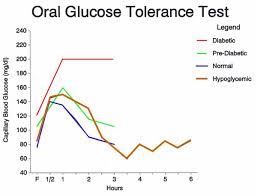 As you develop more and more insulin resistance, you may eventually be diagnosed as IFG (impaired fasting glucose). This refers to a standard test (oral glucose tolerance test – OGTT). In this test, you are given a very sweet drink and blood glucose is measured at various times afterwards. Sometimes, it lasts for 2 hours, sometimes for 5. 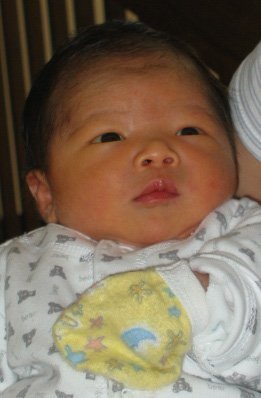 In the normal condition, the BG rises quickly after the sugary drink but soon afterward, it drops back into a normal range. In IFG, the BG rises higher and is much, much slower to come back down into the normal range. However it is not so high that T2D is diagnosed. So it is considered a sort of mid way stage to T2D. Recently, there has been a preference to call this ‘pre-diabetes’ in order to emphasize the fact that this is the same disease as T2D, but not to the same degree.
It also subtly reinforces the notion that T2D is a chronic and progressive disease and that eventually, you will become diabetic. However, this is only a lie, but these big whopping lies are often buttressed by these littler, smaller deceptions. It is like saying my son is ‘pre-medical school’ or ‘pre-CEO’ or ‘pre-real estate tycoon’. It seems to imply that these things are inevitable even if they are not.
There may be a stage even before the IFG stage that is detectably abnormal. Ivor Cummins at www.thefatemperor.com has recently been writing of some of the work of Dr. J. Kraft, who measured the OGTT in over 16,000 patients, but instead of only measuring glucose, he also measured insulin levels. 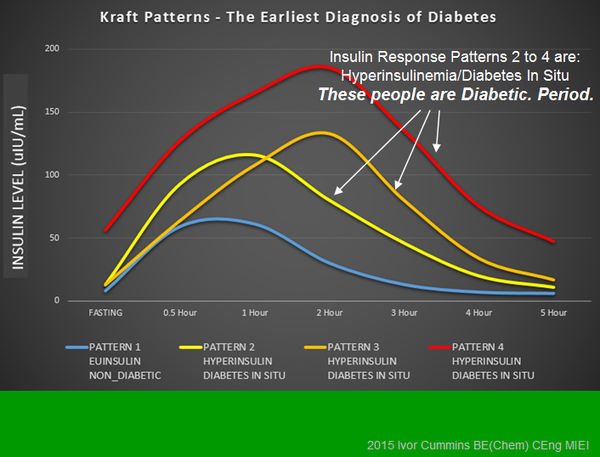 What he discovered was that there were several discernible patterns that identified abnormal glucose metabolism. In the normal situation, after the sugary drink, insulin and glucose both rise and come back down to normal. In the IFG situation, the blood glucose rises above normal.
However, in between those two stages is a situation where blood insulin rises far above the normal situation and this keep blood glucose levels down. In other words, the compensatory hyperinsulinemia prevents the hyperglycaemia which would alert us to the condition of ‘pre-diabetes’. So, if you were to look only at the blood sugars, you would miss the fact that the body is working hard to pump out insulin to keep those sugars in check. In essence, this is a pre-pre-diabetes. 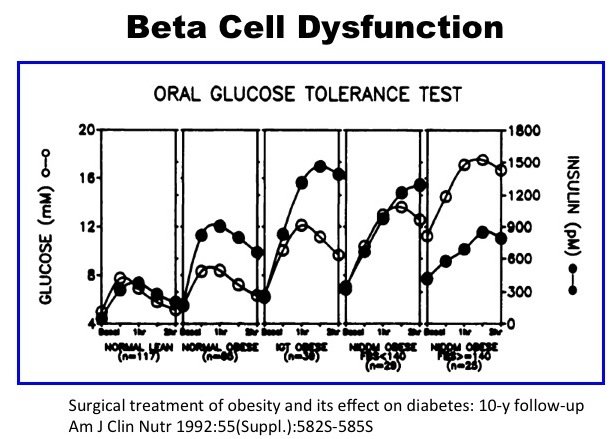 This is particularly useful information because the earlier you treat the insulin resistance, the easier it is to treat, because it is a vicious cycle. However, this insulin measurement is not currently routine on screening tests, and this idea has not generally caught on in conventional medical approaches.
But there is a second phase to the development of T2D. During the period of increasing insulin resistance, there is a gentle creep upwards of the blood sugar. The body keeps producing more and more insulin to ‘overcome’ the insulin resistance, which keeps the BG in a relatively normal range.  After a decade of so, there is then suddenly a change, where the slope of the curve steepens tremendously. At this point, the amount of insulin produced by the body no longer keeps up with the resistance and actually starts to fall. This is considered beta cell failure.
This refers to the beta cells in the pancreas, which produce insulin. As you can see in the graph “Beta Cell Dysfunction”, the amount of insulin produced initially goes up and up, and then starts to drop. Because the body is now producing less insulin, even as there is increased insulin resistance, the blood glucose rockets upwards. Very soon afterwards, the diagnosis of T2D is made.
Why do the beta cells suddenly fail? It is considered a ‘burnout’ of the cells. The theory is that the beta cells have been forced to overproduce insulin in order to overcome the insulin resistance. Heavy insulin production over long periods of time (a decade or so) leads to ‘burnout’ of the beta cells and insulin production then falls. The beta cells start to burn out one after the other and this leads to the chronic progression of T2D. Therefore this disease is chronic and progressive and there is nothing you can do about it. Learn to accept it. You will be on medication for life.
A nice, neat story. Too bad that for the majority (98%) of people, it is simply a lie. Stay tuned….
Start here with ‘My Journey’
Continue here to T2D 3 – “Surgery Reverses Diabetes”
Watch the lecture ‘The Two Big Lies of Type 2 Diabetes’