So, here’s our conventional view of obesity. Eating too much makes you fat. Eating less should cause weight loss. However, as we saw in the last section (part IV), things are not quite so simple. In 1917, experiments showed that reducing calories severely reduced Total Energy Expenditure (TEE) which tends to limit weight loss.
Moving forward several decades, the noted scientist Ancel Keys, who would later play such a crucial role in shaping current nutritional orthodoxies, sought to study the effects of caloric reduction in the famous Minnesota Starvation Experiment, published in 1950. With World War II raging, many millions of people were on the verge of starvation and this experiment was an attempt to understand the effects on the human body. 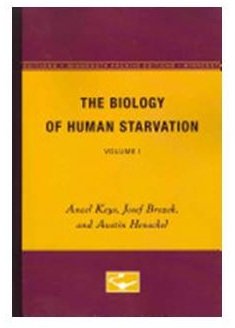 One of the first problems was finding volunteers. As an alternative to going to war, conscientious objectors were recruited. (I think they weren’t volunteering as much as they were ‘volun-told’). Eventually 36 such ‘volunteers’ participated in this study.
Ancel Keys estimated that these subjects were eating roughly 3,200 calories per day. They were put onto a ‘semi-starvation’ diet of 1,560 calories per day with foods similar to those available in war-torn Europe at the time – potatoes, turnips, bread, and macaroni. They were then monitored for a further 20 weeks after the semi-starvation period.
What happened to them? Here we can divide the effects into physical and psychological effects.
Physical effects
Coldness, incessant hunger, weakness, exhaustion, dizziness, muscle wasting, and hair loss were some of the symptoms.
Heart volume shrank by 20%. Heart rate slowed. Body temperature dropped.
Resting metabolic rate dropped by 40%. Interestingly, this is not that far off of the previous study from 1917 that showed TEE decreased by 30%. In other words, the body was shutting down. Let’s think about this again from the body’s point of view. The body is accustomed to getting 3,200 calories per day and now it gets 1,560. In order to preserve itself, it implements across the board reductions in energy.
The heart gets less energy – heart rate slows and heart volume shrinks. Blood pressure drops.
The heating system is turned down – body feels cold.
Muscles get less energy – physical exhaustion.
Hair and nails get less energy – hair loss and brittle nails.
The key to remember, though, is that this ensures survival of the individual under a time of extreme stress. Yeah, you might feel lousy, but you’ll live to tell the tale. This is the smart thing for the body to do. It is not so stupid as to keep burning energy it does not have.
Consider the alternative. The body is used to 3,200 calories per day and now gets 1,560. The body still burns 3,200 calories. Things feel normal. Three months later, you are dead. It is absolutely inconceivable that the body does not react to caloric reduction by reducing caloric expenditure.
Consider many statements to the effect that if you reduce 500 calories per day, you will lose one pound in one week. Does that mean that in 200 weeks you will weigh zero pounds? It is clear that at some point, the body must, must, must reduce caloric expenditure. It turns out that the adaptation happens almost immediately and persists in the long term. More about this later.
Psychological Effects
Obsessive thoughts of food. Bingeing behavior. Extreme depression. Severe emotional distress. Irritability. Loss of libido. Interest in everything other than food vanished. Social withdrawal and isolation. Several subjects became frankly neurotic. One patient reportedly amputated 3 fingers with an axe in an act of self-mutilation. (While we are not sure he was self mutilating, it seems rather difficult to cut off ones own fingers with an axe – how do you swing the axe and keep your fingers on the chopping block?). Anyway, I’m sure you are beginning to get the picture.
Consider the last time you tried to diet by reducing calories and portion size. Does any of this sound familiar? Yeah, thought so.
What happened to their weight after the semi-starvation period? 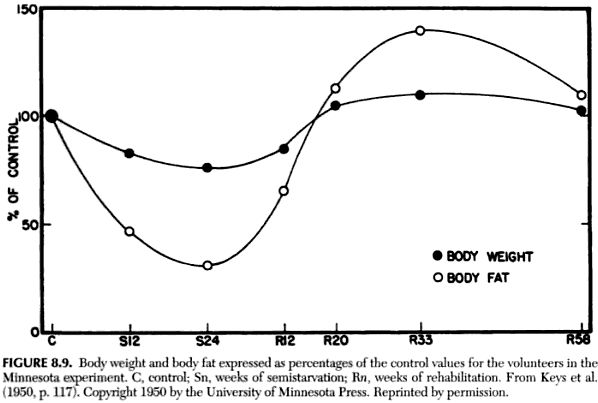 Let’s look at the figure on the right. Along the x-axis we have the 24 weeks of the starvation period (0 – S24). You can see that both body weight and body fat dropped. As they started upon the recovery period, they regained the weight. Actually, the weight was regained rather quickly – in about 12 or so weeks, the weight is back to baseline.
However, it does not stop there. You can see that the body weight continues to increase until it is actually higher than it was before the experiment started.
And just look at that body fat! It goes soaring above baseline. The dirty little secret of most dietary studies is that as weight is lost, both fat and muscle weight are decreased. But when weight is regained, most of it is fat.
Sound familiar? Thought so.
Think about it in dietary terms. Let’s review what happens when you go on a calorie restricted, high carbohydrate, low fat diet of 1,560 calories/day – just like your doctor tells you to do. You feel lousy, tired, cold, hungry, irritable and depressed. That’s not just because you are dieting, there are physiologic reasons why you feel so crappy. Metabolic rate drops, hormones make you hungry, body temperature drops and there are a multitude of psychologic effects. The worst thing is that you lose a bit of weight but you regain it all back when the diet stops.
It is increasingly clear that one of the key assumptions of the Caloric Reduction as Primary theory is incorrect. The caloric expenditures and caloric intake are inextricably linked to each other. 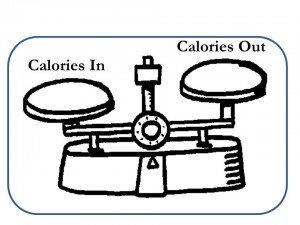 Said another way – reducing Calories In reduces Calories Out. Reducing caloric intake inevitably leads to reduced caloric expenditure. This simple scale is absolutely 100% incorrect. They are NOT independent of one another. That is why conventional dieting as we know it does not work. I know it. You know it.
Actually, we have known this to be true since 1917. In fact, in our heart of hearts, we probably have always known it to be true. Eating less for a prolonged period makes you tired and hungry. And worst of all… you regain all the weight you have lost. Weight lost is muscle and fat. Weight regained is all fat.
We have just chosen to forget this inconvenient fact because our doctors, our dieticians, our government, our scientists, our politicians, and our media have all been screaming at us for decades that it is all about ‘Calories in vs. Calories Out’. Caloric Reduction is Primary. Eat less, Move more and that kind of idiocy.
We need to completely rethink our conventional view of obesity.
Continue to Calories part VI here
Begin here with Calories I
Click here to watch the entire lecture: The Aetiology of Obesity 1/6 – A New Hope