The Blame for Fat Shaming

The main reason why obesity is such an emotionally charged issue is simply that it has become entangled with all kinds of aspersions on a person’s willpower and character. It is completely different from almost every other disease because there is always the unspoken accusation that you did it to yourself. There is always the feeling that you could have done something about it if you weren’t such a weak willed glutton. Many physicians unconsciously engage in ‘fat shaming’ is that they believe that this gives patients extra ‘motivation’ to lose weight. As if the whole world was not reminding them every single day. So, who deserves the blame? The ‘Calories In Calories Out’ (CICO) crowd – those physicians and researchers who have strenuously and constantly cried that ‘A calorie is a calorie’ or ‘It’s all about calories’ or ‘Eat Less, Move More’. Because what they actually mean, but don’t say is ‘It’s all your fault’. The CICO crowd took the disease of obesity and instead of treating it with compassion and understanding infused it with personal shame. I’m here to tell you that it’s all just a huge pack of lies fed to us by their corporate backers.

If you develop breast cancer, for example, nobody secretly thinks that you should have done more to prevent it. Nobody condescendingly tells you to ‘get with the program’. If you have a heart attack, you simply don’t face those hidden accusations. Obesity has become a disease singularly unique in its association with shame. The CICOpaths imply that it’s all your fault and if you weren’t such a loser and just listened to them,  you, too could look like Brad Pitt or Julia Roberts. It’s not true. They’re really just trying to deflect the blame for the obesity epidemic from their own horrible dietary advice they’ve peddled for decades.
This CICO belief stems from a foundational error in logic. We have understood the problem of obesity as a fundamental imbalance of energy, calories. This is a crucial, crucial mistake. I’ve argued in my book, The Obesity Code that this obsessive fixation on calories is incorrect. Let’s think about this. Up until the 1970s, there was little obesity. Yet people had virtually no idea how many calories they ate. They also had virtually no idea how many calories they burn. Exercise was not something you did for fun. Yet, without effort people all around the world lived without obesity. They largely ate whatever they wanted when they were hungry, and didn’t eat when they weren’t.
If almost every single person in the world was able to avoid obesity without counting calories, then how is counting calories so fundamental to weight stability since 1980? People’s bodies were able avoid obesity for over 5000 years, but since 1980, we need calorie counters and step counters? Hardly.
There are two main changes in the American diet since the 1970s. First, we were advised to lower the fat in our diet and increase the amount of carbohydrates. This advice to eat more white bread and pasta turned out NOT to be particularly slimming. But there’s also another problem that had largely flown under the radar. The increase in meal frequency.
In the 1970s, people largely ate 3 times per day – breakfast, lunch and dinner. If you were not hungry, then it was perfectly acceptable to skip a meal. That was your body telling you that you didn’t need to eat, so you should listen to your body.
By 2004, the number of meals per day had increased closer to 6 per day – almost double. Now, snacking was not just an indulgence, it was encouraged as a healthy behavior. Meal skipping was heavily frowned upon. What kind of Bizarro world was this? You need to constantly shove food into your mouth to lose weight? Seriously? If you don’t eat, you’ll gain weight? Seriously? It sounds really stupid, because it is really stupid.

The admonishments against meal skipping were loud. Doctors and dieticians with the heavy backing of corporate $$$, told patients to never, ever skip a meal. They warned of dire consequences. Magazines blared out warnings of the problems of meal skipping. From a physiologic standpoint, what happens when you don’t eat that is really so bad? Let’s see. If you don’t eat your body will burn some body fat in order to get the energy it needs. That’s all. There’s nothing else. After all, that is the entire purpose the body carries fat in the first place. We store fat so that we can use it. So if we don’t eat, we’ll use the body fat.
As people gained more weight, the calls for people to eat more and more frequently grew louder. It didn’t actually work, but that was beside the point. As people became obese, doctors would say to cut calories and eat constantly – graze, like some dairy cow in a pasture.
But this horrible advice didn’t work. So there are two potential sources of the problem. Either the dietary advice for weight loss was bad, or the advice was good, but the person was not following it. On one hand, the problem was the doctor’s advice. On the other, it was a patient problem. Let’s break it down to the basics. Physicians and other nutritional authorities believe religiously that excess calories cause weight gain. They advise patients to eat fewer calories. Either:

I believe that #1 is correct. Therefore, patients with obesity are victims of poor advice to eat more often, lower dietary fat in a desperate effort to reduce caloric intake. Their weight problems are a symptom of a failure to understand the disease of obesity. I do not believe they have low willpower or character. It is not different to me than treating a patient with cancer. 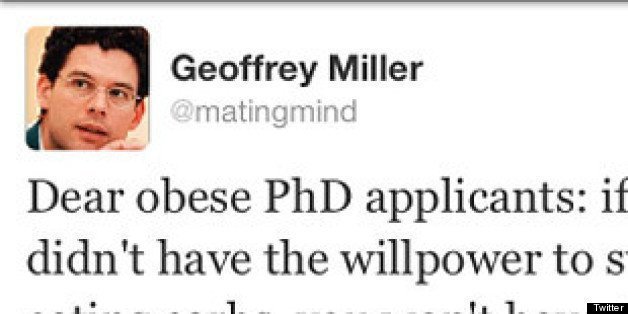 Many physicians and researchers believe option #2. They think the problem is not the advice. They believe the problem is the patients. Therefore, a healthy dose of fat shaming may give them the motivation to get healthy. It’s the ‘A Calorie is a Calorie’ people who are to blame for the phenomenon of fat shaming. They are blaming the victim because it exculpates their own failed understanding of weight gain. They believe that the obesity epidemic was the result of a worldwide collective simultaneous loss of willpower and character.
The name of this game is ‘Blame the Victim’. That way, doctors can go on believing that the advice they give is perfect. It was the patient’s fault. Does this make sense? Somewhere around 40% of the American adult population is classified as obese (BMI>30) and 70% are overweight or obese (BMI>25). Was this obesity crisis actually a crisis of weak will power?

Consider an analogy. Suppose a teacher has a class of 100 children. If one fails, that may certainly be the child’s fault. Perhaps they didn’t study. But if 70 children are failing, then is this more likely the children’s fault, or is it more likely the teacher’s fault? Obviously the teacher. In obesity medicine,  the problem was never with the patient. The problem was the faulty dietary advice patients were given. But the CICOpaths, in their denial have heaped the blame onto those obese patients that were the very victims of the doctors failure to understand obesity as a disease, and not a personal character failing.
This is why obesity is not only a disease with dire health consequences but comes with a huge slice of shame. It is a disease with dire psychological consequences. People blame themselves because everybody tells them it was their fault. Nutritional authorities throw around the euphemism ‘personal responsibility’ when what they really mean is ‘It’s your fault’. But it’s not.
The real problem is the acceptance of underlying assumption that obesity is all about ‘Calories In Calories Out’. This failed CICO mentality has pervaded our entire universe and the natural conclusion of this line of thinking is that if you are obese ‘It’s your fault’ that you ‘let yourself go’. You either failed to control your eating (low willpower, gluttony) or did not exercise enough (laziness, sloth). But it is not true. Obesity, as I’ve written about in The Obesity Code, is not a disorder of too many calories. It’s a hormonal imbalance of hyperinsulinemia. Cutting calories when the problem is insulin is not going to work. And guess what? It doesn’t.
Not only do people with weight problems suffer all the physical health issues – type 2 diabetes, joint problems, etc., but they also get the blame for it. Blame that is unfairly targeted toward them because the advice they received to lose weight had a 99% failure rate. Should people get angry about it? Absolutely. The next time some physician tells you that ‘It’s all about calories’ you have my permission to slug him/her.