A New Paradigm of Insulin Resistance

What exactly is insulin resistance? One of insulin’s jobs is to help move glucose from the blood into the cells for energy. When blood glucose remains elevated despite normal or high levels of insulin, this is called insulin resistance. The cells are resisting insulin’s pleas to take up glucose. But why is this happening? What causes insulin resistance?
The current paradigm of understanding insulin resistance is the ‘lock and key’ model. The hormone insulin acts upon a cell surface receptor to do its job. The insulin receptor is like a lock keeping the gates to the cell closed. Insulin is like the proper key. When inserted, the gate opens to let glucose from the blood inside the cell for energy. Once you remove the key (insulin), the gate closes back up and blood glucose can no longer enter the cell. 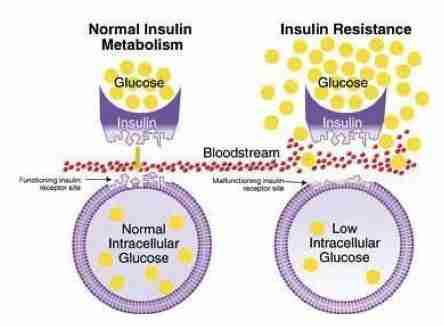 During the phenomenon of insulin resistance, we imagine that the lock and key no longer fit together very well. The key (insulin) only partially opens the lock (receptor) and not very easily. Glucose cannot pass through the gate normally, and as a result, less gets into the cell. The blood glucose piles up outside the gate, becoming detectable as the clinical diagnosis of type 2 diabetes is made.
Because the cell has less glucose inside, this has been described as a state of ‘internal starvation’. The body’s knee-jerk reaction is to increase insulin production. Since each key works efficiently, the body compensates by producing more keys than usual. This hyperinsulinemia ensures that enough glucose gets into the cells to meet its energy requirement. A nice, neat theory. Too bad it has no basis in reality.
First, is the problem the key (insulin), or the lock (insulin receptor)? It’s quite easy these days to determine the molecular structure of both insulin and the insulin receptor. Comparing type 2 diabetic patients with normal patients, it immediately becomes clear that there is nothing wrong with either the insulin or the receptor. So what’s the deal?
If both the key and lock look normal, then the only remaining possibility is that there is something that is gumming up the mechanism. Some kind of blocker interferes with the interaction of the lock and key. But what?
Here’s where the trouble starts. All kinds of theories try to explain what is blocking the insulin. Without a clear understanding of what caused the insulin resistance, we have no chance of treating it. All the usual buzzwords come out when doctors and researchers have no real clue as to what is going on. Inflammation. Oxidative Stress. Free Radicals.
While these may sound impressive, they merely reflect our ignorance, shedding no light upon the root cause of insulin resistance. These are all cop-out answers. Inflammation, like oxidative stress and free radicals, are merely non-specific response to injury. But what causes the injury in the first place? That’s the real problem that needs to be solved.
Imagine that we are battlefield surgeons. After several decades experience, we deduce that blood is bad for health. After all, every time we see blood, bad things are happening. When we don’t see blood, bad things are not happening. Therefore, blood is dangerous. So, deciding that blood is what is killing people, we invent a machine to suction blood out of people before it can cause illness. In medieval times, of course, leeches were used. Genius!
The problem, of course, is what’s causing the bleeding, rather than the blood itself. Look for the root cause. Bleeding’s only the response, not the cause. Bleeding is a marker for disease. So are inflammation, oxidative stress, free radicals and all the other typical answers.
Gunshots, knife wounds, and shrapnel all cause bleeding, the body’s non-specific response. Those are root causes. When you get shot, you bleed. But the problem is the gunshot, not the bleeding. The blood is a marker for the disease, rather than the disease itself.
Fever is another example of a non-specific response to infection and injury. Fever is a good marker for infection. When we find a fever, there is often an underlying infection. But the fever did not cause the infection. Bacteria or viruses are the underlying cause.
The same logic applies to inflammation, oxidative stress and free radicals. Something is causing injury, which stimulates inflammation, oxidative stress and free radical formation, which are all the body’s non-specific response. The problem is whatever caused injury, not the inflammation, oxidative stress and inflammation, which is simply markers of disease.
If inflammation were actually the root cause of heart disease, for example, then anti-inflammatory medications, such as prednisone or non-steroidal anti-inflammatories would be effective in reducing heart disease. But they are not beneficial at all. They are only useful for those diseases where excess inflammation is truly the root cause, such as asthma, rheumatoid arthritis, or lupus.
The exact same logic applies to oxidative stress, which is a marker of disease, but not a causal factor. Some underlying injury is causing the oxidative stress, which needs to be treated. This is the reason why antioxidant therapy is so startlingly ineffective. Vitamin C, or E or N-acetylcysteine or other antioxidant therapies, when tested rigorously, fail to prevent disease.
Saying that, “Insulin resistance is caused by inflammation” is like saying, “gunshot wounds are caused by bleeding”. Not useful. However, inflammation, bleeding and fever are all useful markers of disease and treatment efficacy. They mark the presence of the disease. If the fever breaks, then the treatment (antibiotic) is highly likely to be effective. Inflammatory markers can also be good markers for the effectiveness of treatment. If insulin therapy decreases inflammation, then this is likely an effective treatment. Sadly, it does not.
Without understanding the root cause of insulin resistance, we have no hope of properly treating it. This lock and key model with ‘internal starvation’ is a nice story but cannot explain many of the phenomena observed in type 2 diabetes. In particular, it fails to explain the central paradox of insulin resistance.

Recall that insulin normally goes up when you eat. Insulin acts predominantly in the liver to help store incoming food energy. Insulin instructs the liver to do two things.

In a state of high insulin resistance, such as type 2 diabetes, both actions of insulin should be simultaneously blunted. This certainly hold true for the first action of insulin. Insulin yells at the liver to stop making new glucose, but the liver continues to pump it out. Glucose spills out into the blood, provoking the body to increase insulin levels.
In an insulin resistant state, the second action of insulin should also be blunted, but is paradoxically enhanced. Using the old lock and key paradigm, the insulin resistant liver does not allow glucose through the gate leading to ‘internal starvation’. In this circumstance, the liver cannot create new fat and DNL should shut down. But in fact, DNL not only continues and actually increases. So insulin’s effect is not blunted but accelerated!
In fact, there is so much new fat being generated, that there is nowhere to put it. This leads to excess accumulation of fat inside the liver, where there normally should be none. Liver fat should be low, not high. But type 2 diabetes is strongly associated with excessive fat accumulation in the liver.
How can the liver selectively resist one of insulin’s effect of insulin yet accelerate the other? This happens in the very same cell, in response to the very same levels of insulin, with the very same insulin receptor. This makes no sense whatsoever. Insulin sensitivity is reduced and enhanced at the exact same time and in the exact same place!
Despite decades of ongoing research and millions of dollars, all the world’s top researchers were still stumped by this central paradox of insulin resistance. Research papers were written. Different hypotheses were proposed, but all failed because the old ‘lock and key’ paradigm of insulin resistance with internal starvation was incorrect. Like a house built on a crumbling foundation, the entire underlying premise of treatment of type 2 diabetes disintegrated. 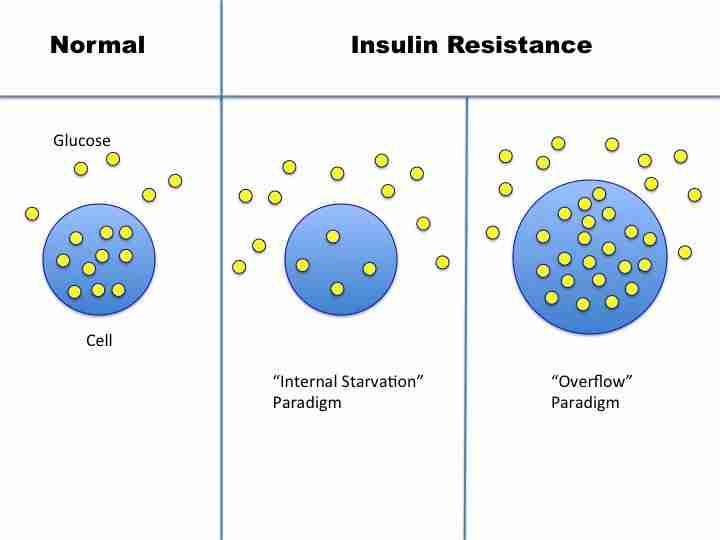 How can we explain this apparent paradox? The vital clue is that insulin itself causes insulin resistance. The primary problem is not the insulin resistance, but the hyperinsulinemia.
Insulin resistance refers to the fact that for a given amount of insulin, it is more difficult to move glucose into the cell. But this does not necessarily mean that the gate is jammed. There are other possibilities why glucose cannot get into that resistant cell. Perhaps the glucose cannot enter the cell because it is already overflowing. The new paradigm of insulin resistance as an overflow phenomenon resolves the central paradox.
This changes EVERYTHING. If you believe the old ‘lock and key/ internal cellular starvation’ model, then the appropriate treatment is to increase insulin as much as needed to push that pesky glucose into the cell. That has been the way we have treated type 2 diabetes for the last 50 years. And it’s been a complete disaster. The ACCORD/ ADVANCE/ VADT/ TECOS/ SAVIOR/ ORIGIN randomized controlled trials all proved the failure of this paradigm.
However, if the ‘overflow’ paradigm is correct, then increasing insulin to push more glucose into an overflowing cell is EXACTLY wrong! This would only make diabetes worse. Which is EXACTLY what we see clinically. As we prescribe insulin to type 2 diabetes, patients don’t get better, they get worse. Their blood glucose is better, but they gain weight and they still develop all the complications – heart disease, stroke, kidney disease, blindness etc.
The correct treatment of the overflow paradigm is to empty out the BODY, not just the blood of the excessive glucose. How? LCHF and intermittent fasting. And guess what? That’s EXACTLY what we see clinically. As we start fasting type 2 diabetes patients, they lose weight, their medication requirements go down and eventually it reverses.