The Critical Importance of Meal Timing for Weight Loss

There have been two main changes in dietary habits from the 1970s (before the obesity epidemic) until today. First, there was the change is what we were recommended to eat. Prior to 1970, there was no official government sanctioned dietary advice. You ate what your mother told you to eat. With the publication of the Dietary Guidelines for Americans, we were told to cut the fat in our diets way down and replace that with carbohydrates, which might have been OK if it was all broccoli and kale, but might not be OK if it was all white bread and sugar. 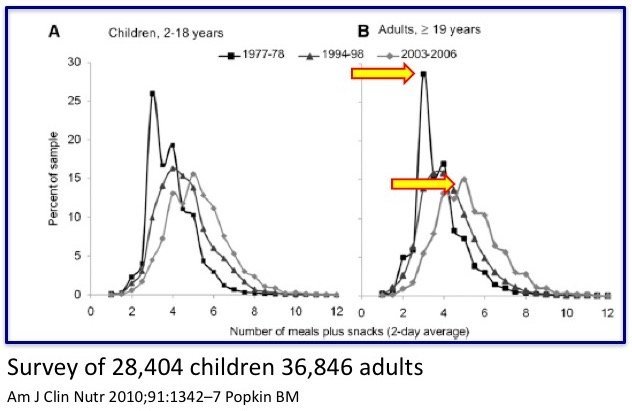 But the other major change was in when we eat. There were no official recommendations on this, but nevertheless, eating patterns changed significantly, and I believe contributed equally to the obesity crisis. From the NHANES study in 1977, most people ate was 3 times per day – breakfast, lunch and dinner. I grew up in the 1970s. There were no snacks. If you wanted an after school snack, your mom said “No, you’ll ruin your dinner”. If you wanted an bedtime snack, she just said “no”.  Snacking was not considered either necessary or healthy. It was a treat, to be taken only very occasionally.
By 2004, the world had changed. Most people were now eating almost 6 times per day. It is almost considered child abuse to deprive your child of a mid-morning snack or after school snack. If they play soccer, it somehow became necessary to give them juice and cookies between the halves. We run around chasing our kids to eat cookies and drink juice, and then wonder why we have a childhood obesity crisis. Good job, everybody, good job. Without any science to back it up, many nutritional authorities endorsed eating multiple times per day as a healthy practice. There were no studies that remotely suggested this was true. It was likely the successful efforts of snack food company advertising to dieticians, and doctors, clueless about nutrition at the best of times, who simply went along for the ride. 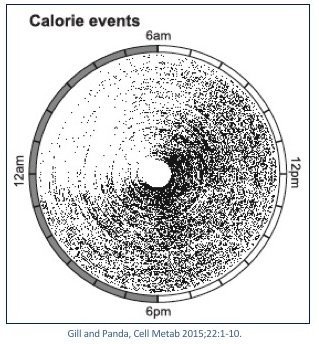 Recently Satchin Panda did an interesting study on current eating habits, tracked via a smartphone app. The 10% of people who ate the least frequently, ate 3.3 times per day. That is, 90% of people ate more than 3.3 times per day. The top 10% of people ate an astounding 10 times per day. Essentially, we started eating as soon as we got up, and didn’t stop until we went to bed.
The median daily intake duration (the amount of time people spent eating) was 14.75 hours per day. That is, if you started eating breakfast at 8 am, you didn’t, on average, stop eating until 10:45! Practically the only time people stopped eating was while sleeping. This contrasts with a 1970’s era style of eating at 8am breakfast and dinner at 6pm, giving a rough eating duration of only 10 hours. The  ‘feedogram’ shows no let up in eating until after 11pm. There was also a noticeable bias towards late night eating, as many people are not hungry in the morning. An estimated 25% of calories are taken before noon, but 35% after 6pm.
When those overweight individuals eating more than 14 hours per day were simply instructed to curtail their eating times to only 10-11 hours, they lost weight (average 7.2 pounds) and felt better even though they were not instructed to overtly change what they ate, only when they ate. 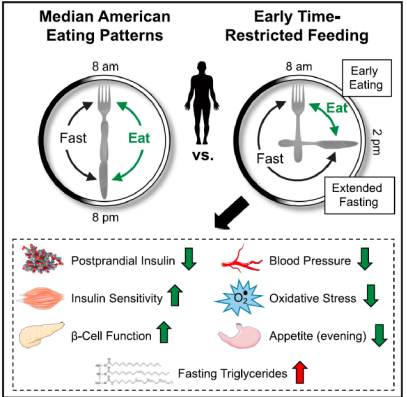 This has huge metabolic consequences. A fascinating study was recently published directly comparing a regular eating schedule to an optimized time restricted feeding schedule. Both intermittent fasting and time restricted eating tend to produce some reduction in food intake, and therefore it is never clear whether the benefits of these strategies are due to timing (when to eat) or food intake (what to eat).
The circadian rhythm, as I’ve discussed previously, suggests that late night eating is not optimal for weight loss. This is because excessive insulin is the main driver of obesity, and eating the same food early in the day or late at night have different insulin effects.  Indeed, studies of time restricted eating mostly show benefits from reducing late night eating. So it makes sense to combine two strategies of meal timing (circadian considerations and time restricted eating) into one optimal strategy of eating only over a certain period of the day, and only during the early daytime period. Researchers called this the eTRF (early Time Restricted Feeding) strategy. 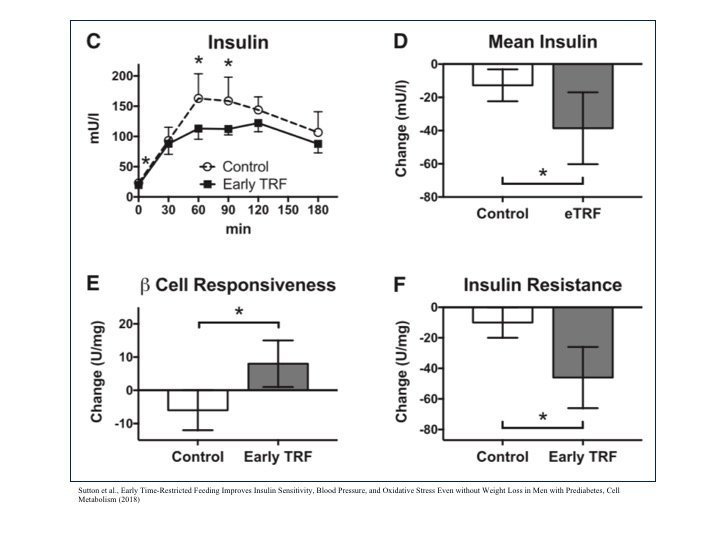 This was a randomized crossover, isocaloric and eucaloric study. That is, all patients did both arms of the study eating the same foods and the same calories and then compared against themselves. The two arms of the study were eating between 8am and 8pm, and the eTRF strategy of eating between 8 am and 2pm, but remember, both groups ate 3 meals per day of the same foods. Some would start with the conventional diet, then cross over to eTRF, and others did the opposite, separated by 7 weeks washout period. Subjects were men with prediabetes.
The benefits were huge. Mean insulin levels dropped significantly, and insulin resistance dropped as well. Insulin is a driver of obesity, so merely changing the meal timing and restricting the number of hours you ate, and also by moving to an earlier eating schedule produced huge benefits even in the same person eating the same meals. That’s astounding. Even more remarkable was that even after the washout period of 7 weeks, the eTRF group maintained lower insulin levels at baseline. The benefits were maintained even after stopping the time restriction. Blood pressure dropped significantly as well, demonstrating even more metabolic benefits. Same person. Same number of meals. Same food. Far improved metabolic profile.

But won’t the time restricted feeding group be more hungry? Sure they might be skinnier, but their poor stomachs are growling for food in the evening, right? No pain, no gain. Incredibly, it was the opposite. Those people who restricted late night eating had LESS desire to eat, but also less capacity to eat. They couldn’t eat more at night even if they wanted to! That’s amazing, because now we are working with our body to lose weight instead of constantly fighting it. It is obviously easier to restrict eating in the evening if you are not hungry.
Somewhat counterintuitively, restricting eating at 2 pm produced more feelings of fullness in the evening. Some other important lessons learned is that there is an adaptation period to this method of eating. It took participants 12 days on average to adjust to this way of eating. So don’t start this eTRF strategy and decide it didn’t work for you after a couple of days. It can take up to 3 or 4 weeks to adjust. Most found the fasting period relatively easy to adhere to, but more difficult to adjust to the time restriction.

That is, it’s not hard to fast for 16 or 18 hours. But eating dinner at 2 pm is tough. Given the modern schedule of working or school during the day, we tend to push our main meal into the evenings. The main family meal together is dinner, and this is ingrained into us. So, I’m not saying this is an easy task, but it may certainly have a number of metabolic benefits. Having a fasting support group, such as the IDM membership community, can certainly help. Fasting aids, such as green tea, coffee or bone broth can also help (although some would not consider that a true fast).
But the bottom line is this. We focus nearly obsessively on the question of ‘What to Eat’. Should I eat avocados or steak? Should I eat quinoa or pasta? Should I eat more fat? Should I eat less fat? Should I eat less protein? Should I eat more protein? Let’s face it, the answer changes every few years, according to who you ask.
But an equally important question lies almost completely unanswered. What effect does meal timing have on obesity and other metabolic parameters? Quite a lot, it turns out. Having a well defined fasting period is likely very important. The strategy of eTRF, and intermittent fasting more generally now gives exhausted dieters a new hope.