The Failure of the Calorie Theory of Obesity

The calorie theory of obesity has been perhaps one of the greatest failures in the history of medicine. Given the number of excess deaths caused by metabolic syndrome, you could argue that it is a bigger disaster than World War II. It is based on a com
plete misinterpretation of the energy balance equation.

This equation, known as the energy balance equation is always true. So, looking at this equation, people then say something like ‘It’s all about restricting the calories you eat’, or ‘All diets work by restricting calories’. On the Calories Out side, you hear things like ‘You should exercise more’. This is the standard Eat Less, Move More approach. Doctors, even so-called ‘obesity experts’ and various health professionals say stuff like this all the time, but they’re completely wrong. The problem is that they don’t even know why they’re so wrong.
The energy balance equation (which, yes, is always true) does NOT support the Eat Less, Move More approach. Huh? Let me explain. You can also watch my recent video from NBC here.

Let’s throw some numbers into the mix to make things more clear. Let us assume the baseline situation of stable body weight (zero body fat gained or lost) and 2000 calories per day intake.

Calories Out is not just exercise. This is composed of 2 things – resting energy expenditure, or basal metabolic rate (BMR) and exercise. If you assume zero exercise, an average BMR is 2000 calories per day. This energy is used by the heart, lungs, kidneys, generation of body heat etc. Note that BMR is NOT under conscious control. You cannot ‘decide’ that your heart will pump more blood. You cannot ‘decide’ to generate more body heat. No amount of willpower will make your kidneys use more energy.
Exercise is generally a very small portion of the total daily expenditure, unless you are exercising multiple hours in the day. Consider a moderate exercise of 1 hour of moderate walking/ jogging, 3 times per week.  Each walk burns approximately 100-200 calories. If you’ve ever exercised on a treadmill with a calorie counter, you’ll know how slowly that meter rises. That 100 calories used during exercise pales in comparison to the 2000 calories eaten on an average day. So, we can safely ignore the effect of exercise except for those who do in excess of 1 hour per day.
So, people suppose that if you decrease your caloric intake by 500 calories per day or 3500 calories per week, that you will lose 1 pound of fat per week assuming that 1 pound of fat contains roughly 3500 calories.

Please take careful note that in order to lose body fat, Calories Out MUST remain stable. Must. Must. But this is precisely what we know to be FALSE for at least the last 100 years. BMR may increase or decrease 30-40%. This was shown as early as 1917, when studies showed that a reduction of calorie intake by 30% is quickly met by a decrease in BMR by 30%.
Dr. Ancel Keys showed much the same effect in his famous Minnesota ‘starvation study’. Despite the title, subjects were given 1570 calories per day, more than most weight loss regimens being prescribed today. A drop in calories eaten by 40% is met with a 40% drop in BMR.
The reason for this is simple. Your body is very smart and does not want to die. If you do not alter your hormones (predominantly insulin), you won’t be able to access your fat stores. If you can’t get energy from body fat, then then you cannot run an energy deficit forever. If you are only taking in 1500 calories, you can only spend 1500 calories.
So BMR drops. We’ve known this for over a century. If you cut a few calories every day, your body will burn less calories and you will not lose fat. Weight loss plateaus and then you start to regain weight. So, counting calories, as a strategy for weight loss, has been proven over and over again to fail.
Strategies that lower insulin, however (Low Carb, Intermittent Fasting) are completely different. By lowering insulin, we tell our bodies that there is no food coming in. Therefore, the body switches from burning the calories from food, to burning the calories from our body fat. Our body wants to burn 2000 calories, but it just gets them from body fat instead of food. Instead of restricting energy (calories), our body is switching fuel sources, from food to stored food (body fat). But this can only happen if we correct the underlying hormonal problem of excessive insulin. So is ‘Calories In Calories Out’ totally useless? Well not totally.
You may have heard of or received an email offer for the Nigerian Phishing (email fraud) scam. The story goes like this. A few years ago, some crooks would send out millions of emails to potential marks (victims). The emails would say that they were an exiled Nigerian prince that was forced to flee out of his home country. He had $10 kajillion dollars in the bank and offered to split it with you if you would only give him your banking information. In other scams, the crooks would ask for money. Send them $1000 dollars and then they could go to the bank, retrieve their $10 billion and give you $2 billion as a thank you. The scam became well known as a fraud and most people recognized it immediately so they simply deleted the email. 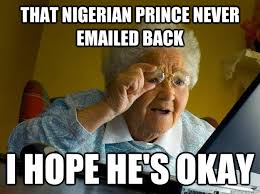 However, contrary to what you might expect, the scam did not disappear. I still receive these emails on a regular basis, and they even keep the Nigerian prince rather than change it to, for example, an Indonesian princess. Since almost everybody has heard of this scam, what was the point?
Crooks could immediately identify potential marks by sending out this particular scam. If the crooks made up a new scam, they would receive many replies to their email, but most of them would not be gullible enough to hand over actual cash. By keeping the Nigerian prince scam, they could immediately and efficiently identify the most gullible people who would hand over cash. In this way, the Nigerian prince scam is a great marker for gullibility.
The Calories In/ Calories Out (CICO) model performs the same task for me. The CICO model has been tested over and over again. Multiple trials have shown it to be a complete failure. If somebody vociferously defends the CICO paradigm, I can immediately and efficiently identify them as people who have not really understood what causes obesity, and have no serious grasp of the physiology behind weight gain. These are the people who keep parroting ‘A calorie is a calorie’, as if I had asked them ‘Is a calorie a calorie’? The question I ask is ‘Are all calories equally fattening’, to which they usually stare blankly at me, before replying ‘It’s all about calories’, as if the body had any actual method of measuring calories.
The CICO model very useful because it efficiently flags people who are not all that knowledgable about obesity, and I can safely ignore them. There are many of these people out there, and not everybody is worth listening to.