In Greek mythology, Procrustes is a son of Poseidon (god of the sea) who often invited passersby to stay at his house to rest for the night. When he showed them to their bed, if the guest was too tall, he would chop off their limbs until the bed fit just right. If they were too short, he would stretch them on a rack until the bed fit just right. The great contemporary thinker and philosopher Nassim Nicholas Taleb often uses this allegory, but it is also quite appropriate to describe how the facts have been tortured to fit the theory of the Somatic Mutation Theory (SMT) 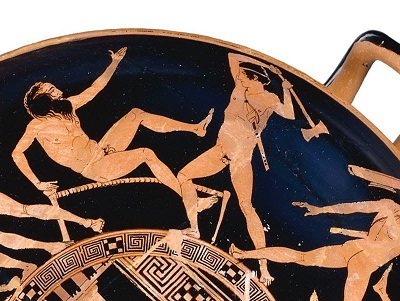 The basis of the SMT (that mutations cause cancer) was first postulated in 1914, by Theodor Boveri in his book ‘The Origin of Malignant Tumors’ who guessed that a combination of chromosomal defects could result in cancer. Looking at retinoblastoma, a rare eye tumor, Alfred Knudson suggested that a single mutation could result in cancer.
The 1950s discovery of the double helix of DNA by James Watson and Francis Crick lit a fire under genetic research, making this theory the predominant cancer hypothesis for the next half century. Clearly, some tumours have a genetic predisposition such as those that run in families. But 90-95% of cancers do not fall into this category – they are ‘sporadic’. But that doesn’t stop Procrustean cancer researchers and doctors from stretching the facts of cancer to fit the ‘random genetic mutation’ narrative.
The discovery of oncogenes and tumor suppressor genes led to the hope that cancer was caused by only one simple genetic mutation that could be targeted and corrected. In the case of chronic myelogenous leukaemia, this seems true, with a single chromosomal abnormality leading to disease. A single genetic mutation could abnormally accelerate growth genes (oncogenes) or take the brakes off suppressor genes, with the same effect of uncontrolled growth.But a problem existed. Between 1980 and 1990, hundreds and hundreds of these potential gene targets were identified. If that was true, then why wasn’t everybody getting cancer?
This single mutation theory was considered too simplistic for most common cancers, leading to the ‘two hit hypothesis’, a theory I learned in medical school in the early 1990s. Cancers had genetic mutations, but it was not at all clear that these mutations were primarily responsible for causing the cancers (see previous post – proximate vs. ultimate causes).
So how many genetic changes were necessary for these cancers? In 1988, Bert Vogelstein, at Johns Hopkins Medical School started to investigate this question. Cancer seems to progress in a relatively orderly manner. The discovery of pre-cancerous lesions, for example, in cervical cancer, allowed the development of the PAP smear. There was a long lag time between abnormal cells detected and true cancer, during which treatments could be used to prevent worse disease.

Colon cancer shows this same orderly progression – from a non-invasive, premalignant lesion called an adenoma to the full fledged cancer. This is the reason why screening colonoscopies are recommended – to catch these pre-cancerous lesions and deal with them before they become cancer. Indeed, colon cancer alone amongst the obesity related cancers is showing decreasing incidence, possibly due to widespread use of screening. Using colon cancer as an archetype, Vogelstein showed that genetic mutations accumulated in a manner parallel to the clinical progression. By intervening early and removing these precancerous lesion, you could hope to prevent future invasive disease.
One single mutation was not enough to cause cancer by itself. But as a cell accumulates a second or third mutation, it moved closer and closer to becoming cancer. If we could identify these 2 or 3 or 4 mutations, again, we have a target for treatment. In 2003 the Human Genome Project was completed – the race to decipher the complete genetic code of a human being. Using this ‘normal’ genome, a more ambitious project, The Cancer Genome Atlas, could compare the difference between cancer cells and normal cells and look for common mutations.
Optimism for the future of cancer treatment was impossible to suppress. James Watson, the co-discoverer of DNA and Nobel laureate, wrote in a 2009 New York Times opinion that ‘To Fight Cancer, Know the Enemy‘. TCGA was the long awaited cancer moon shot to know the enemy and bring the fight to him. He wrote “Beating cancer now is a realistic ambition because, at long last, we largely know its true genetic and chemical characteristics”. Watson, a member of the National Cancer Advisory Board since the time of President Nixon, was finally hopeful for the future. 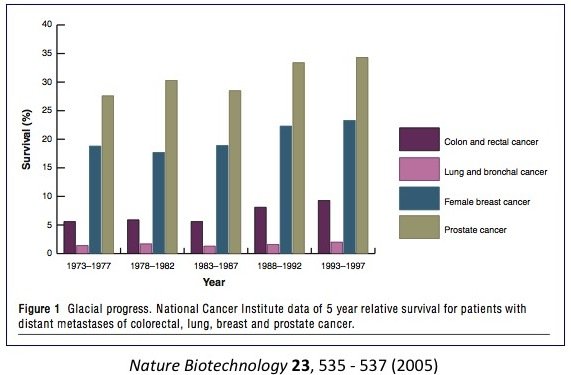 But not everybody was convinced. Commentary by George Miklos in 2005 suggest that we should “Strap yourself in and get ready for some serious ‘more of the same'” His point, not well appreciated at the time, was that this new megaproject was only the ultimate culmination and continuation of a futile line of research that had so far gone exactly nowhere. The survival of cancer patients stagnated from 1973 to 1997, 25 years in which death from heart disease and stroke fell over 50%. From the viewpoint of Nixon’s war on cancer, it looked we were losing. 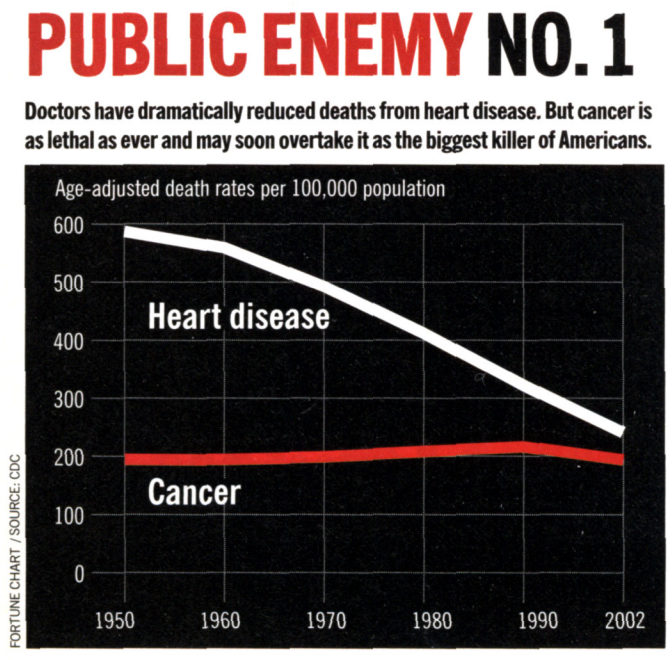 Every area of technology – biotechnology, genetics, computers, semiconductors was advancing at a pace never before seen in human history. Network connectivity (Internet) was being developed at breakneck speed. Computing power was doubling every 18 months or so. Space travel was becoming a reality.
But cancer? Cancer was a problem child. It wasn’t that we weren’t focused on the problem. Cancer research had consumed hundreds of billions of dollars already, but the common cancers were just as deadly as ever. Cancer research had focused myopically on the search for oncogenes and tumor suppressor genes. It’s not like there weren’t any researchers. Up to 2004, PubMed lists 1.56 million papers published on cancer. 1.56 million! The National Cancer Institute budget for 2004 was $4.7 billion. If you add in charities and other funding including pharmaceuticals, it was $14.4 billion. No, it wasn’t lack of money or lack of researchers that was the problem. It was the lack of fresh ideas.
The cost was estimated to be $1.35 billion over 9 years of the project. Dr. Craig Venter, who had just recently completed the Human Genome Project opined that “Diverting a billion or two dollars from other areas of research when its not clear what answer we’d get, there might be better ways to move cancer research forward”. Prophetic, yes. Heeded, no. It was already known at the project’s genesis that tumours mutate rapidly, and two cells even within the same tumor may have completely different mutations. In the New York Times, Dr. Baylin worried “We can spend $2 billion on something and get a lot of data, but I’m not convinced it will do us much good”.
As the first reams of data started to pore in, the first inklings of the enormity of the challenge started to percolate. In individual breast or colon cancers, cells had not 2 or 3 or 4 of the same mutations, but 50-80 mutations. Even brain cancer, which tends to occur in younger patients had 40-50 mutations. But even worse, the mutations were different between cancers. Two clinically identical breast cancers will each have 50-80 mutations, but 50-80 completely different mutations from each other! It was genetic bedlam.
But the mind sees what it wants to see. Cancer researchers saw genetic mutations everywhere so the SMT was made to fit the Procrustean bed. Instead of individual mutations, they were lumped into mutation ‘pathways’ so that multiple mutations within a single pathway could be identified as a single problem. Then, certain mutations were also felt to have no effect, so there were ‘driver’ mutations and ‘passenger’ mutations that, all of a sudden, didn’t count. Even with all this Procrustean work, studies still estimated that each breast or colon cancer still required about 13 driver mutations. That’s better than the 50-80 mutations, but a lot worse than the 2-hit or 3 hit theories of the 1990s.
But the mutations within tumours were uneven, too. In a study of 210 human cancers, 20 tumours had between 10 and 75 mutations while a full 73 had none at all! Bloody hell. If mutations caused cancer, how could 35% of the cancers not have a single mutation? A full 120 different driver mutations were identified. Bloody hell. Over half of the tumours had completely different driver mutations. 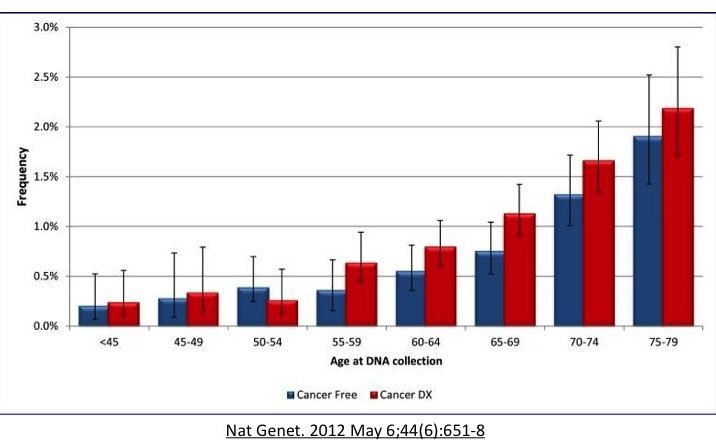 But there was another insurmountable problem. If genetic mutations caused cancer, then normal tissues should not have these mutations. But they did. Lots of normal non cancerous cells had the same mutations as cancer cells. In a detailed analysis of 31,717 cancer cases comparing to cancer-free controls from 13 genome wide association studies, “the vast majority, if not all, of aberrations that were observed in the cancer-affected cohort were also seen in the cancer-free subjects, although at lower frequency“.
There were more genetic problems in the cancer patients, for sure, but it was not by a lot. The odd ratio was only 1.25. Lots and lots of people had the same mutations in their genes, but were not developing cancer. This is a real problem. In other words, yes, cancers have mutations. But no, these mutations were not causing cancer. Kind of like saying that great basketball players all have 2 hands and 2 feet. Without exception. Therefore, having 2 hands and 2 feet makes you a great basketball player. Thats a problem if lots of people also have 2 hands and 2 feet and suck at basketball. Yes, cancers have lots of mutations. But so do lots of non cancerous cells.
The other major problem is that the somatic mutation theory focuses primarily on the original mass of the tumor. But this is not the part of cancer that kills. Cancer really only kills when it spreads – the metastasis. The facts of cancer fall far, far outside the ‘Cancer as a collection of random genetic mutations’ narrative. We’ve tortured the facts as far as possible to fit the predetermined story. It’s time to leave the Procrustean Bed.