The Proof is in the Pudding – More Turds in the PunchBowl

Have you ever heard the phrase “The proof is in the pudding”? It is also sometimes “The proof of the pudding is in the eating.” What does this mean? No matter what you think, you need to look at the results to really judge something.
Suppose you think that adding chalk to a pudding recipe will make it better. You might come up with all kinds of great reasons why – it will make the colour lighter, it will improve the texture, it will improve the flavour. But none of this really matters in the end. The only question you need to ask is this – “How does it taste?”  If the taste is horrible, then it doesn’t matter about what you think, or why you might believe the chalk is good. The proof lies in the results – the taste of the finished pudding. The proof is in the pudding.
So let’s apply this to obesity. The dominant nutritional theory of the last half century has been Calories In, Calories Out. We had erroneously believed that excessive calories is what leads to obesity. (You can review the Calories series to learn more about why this is wrong). Within this paradigm, reducing ‘calories in’ would lead to reduced weight. Furthermore, increasing exercise would increase ‘calories out’ and therefore, also cause weight loss. Fat, being very calorically dense (9 calories/gram as opposed to about 4 for carbs and protein), should be the main thing to reduce in your diet for weight loss. 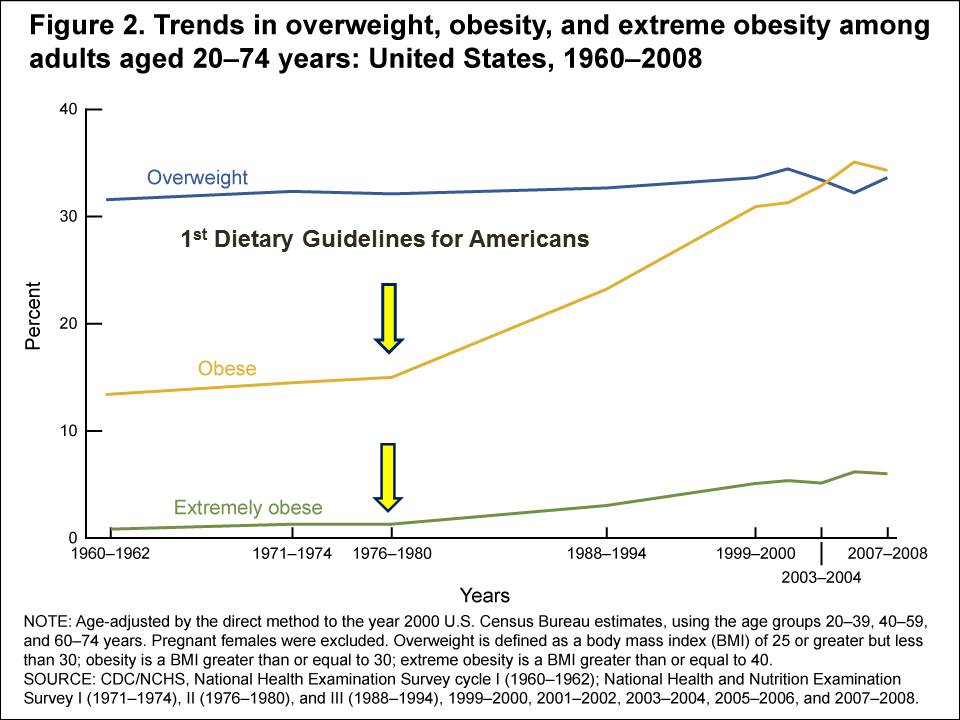 So here we have the low fat, low calorie diet combined with increased exercise. This is very neatly summarized by the Eat Less, Move More approach. And this has been the standard dietary prescription for the last half century. We can invent all kinds of mechanisms (Calories In, Calories Out) as to why it should work, but does it? What are the results? Everything depends on the results. The proof is in the pudding.
Well, here’s the results. A huge, rampant global obesity epidemic. The Center for Disease Control (CDC) in Atlanta recently updated its obesity map for the United States and the results are, well, horrifying. No state had an obesity rate below 20%. As late as 1995, no state had an obesity rate higher than 20%. 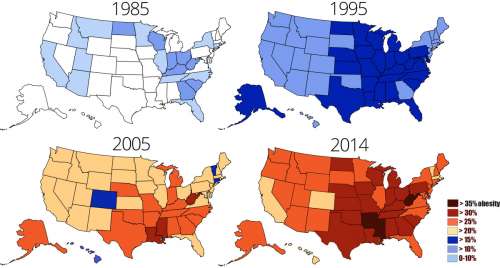 So let’s juxtapose these two incontrovertible facts together:

Considering these two facts together, there are only 2 possible conclusions. One possibility is that the advice is good, but people are simply not able to follow it. This would be a real stretch of the imagination. Nobody really wants to be fat. When doctors advised people to stop smoking, they stopped smoking. When doctors advised to watch their blood pressure and cholesterol, they watched their BP and cholesterol. When doctors advised to increase exercise, they increased exercise. Yet somehow, they didn’t follow a low-fat, calorie reduced diet? Doubtful.
This belief is the recourse of cowards everywhere and also known as ‘Blame the Victim’. It is far easier to suppose the advice that we give is good and the victim has somehow brought this on him or herself. This shifts the psychological blame from the advice giver to the advice taker. Just as ignorant people may have once believed “Those blacks brought the violence upon themselves by sitting in the white-only section”, ignorant people now believe that “Those fat people brought this on themselves”. 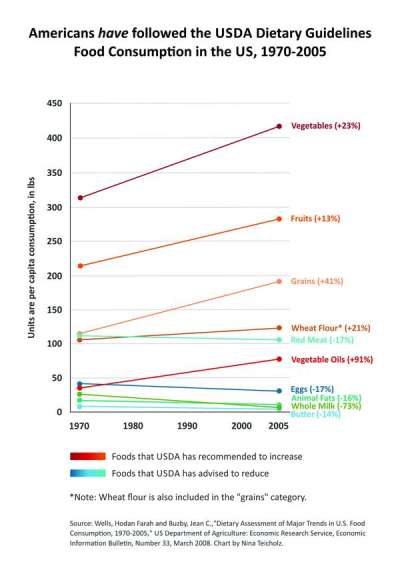 Further, the data does not support the supposition that people did not follow this advice. People did in fact, reduce their intake of fat significantly, just as the doctors advised.  This was replaced by carbohydrates, just as the 1977 Dietary Guidelines suggested. What scares me most of all, by the way, is the +91% on vegetable oils (shudder).
So, it was not simply that people did not follow the advice. They did. So we cannot really suggest that the reason that dietary advice failed is that people were not listening. They were.
Are Americans eating more calories? Not really. The correlation between obesity and the increase in calorie consumption has recently broken down. Data from the National Health and Nutrition Examination Survey (NHANES) in the United States from 1990 to 2010, finds no association between increased calorie consumption and weight gain. While obesity increased at a rate of 0.37 percent per year, caloric intake remained virtually stable. Women slightly increased their average daily caloric intake from 1,761 calories to 1,781, but men slightly decreased theirs from 2,616 calories to 2,511.
So, what’s the only remaining possibility? That the advice to Eat Less and Move More is simply wrong. This is logically the most correct response. In fact, given the severity of the obesity epidemic, it is likely that most or all of our conventional Eat Less, Move More advice is wrong.
Let’s see what the success rate of the CRaP methodology. Here’s an interesting paper detailing the damage we’ve done. Researchers in the UK looked at close to 175,000 obese men and women excluding those that received bariatric surgery. Most, we can assume got the CRaP advice to cut calories. During 9 years of follow up, how many were able to achieve a normal weight?
Success rates averaged 1 in 210 for men and 1 in 124 for women. For both, say 1 in 167 or 0.006. That, is a 0.6% chance of success and a 99.4% chance of failure. But for those who were most obese (BMI>40), the odds drop down to 1 in 1290 for men and 1 in 677 in women. For both, say 1 in 983.5 or 0.001. That is a 0.1% chance of success or a 99.898% chance of failure.
But I don’t really need a study to convince you of the truth. This reeks of truth. You knew it already. Eat Less, Move More never, ever works. After all, who hasn’t tried the CRaP method? Face it, we have all tried it. And we have all failed. 99.898% failure rate? Yeah, sounds about right to me.
The dietary advice was simply wrong. Yet nutritional authorities like the National Institutes of Health’s Kevin Hall continue to preach, and preach. Let’s get out of the ivory tower and into the real world, because that is where we all live, not your metabolic lab.
But here’s the most important thing to understand.
Whether it is the first (good advice that people do not follow) or second possibility (bad advice that people follow), IT DOESN”T MATTER. The advice is still bad. If you give advice that nobody is able to follow, it is still bad advice.
So, again, following logically, the Caloric Reduction as Primary (CRaP) advice is bad because we have a raging obesity and diabetes epidemic. The proof is in the pudding. What is to be done? Again the only logical conclusion is to CHANGE THAT ADVICE. 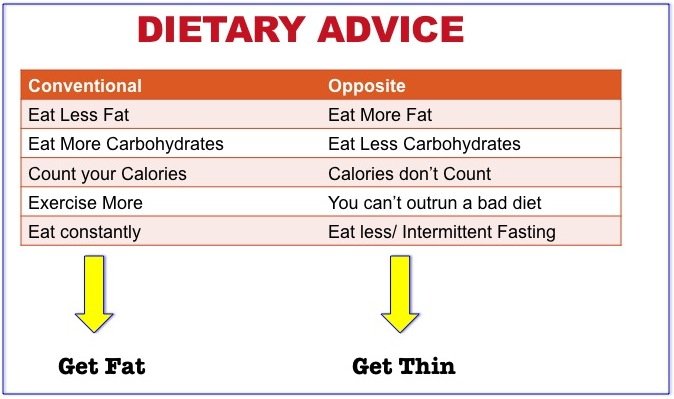 We should follow George Costanza’s (from Seinfeld) advice. When he realized that all his decisions were bad, he deliberately did the opposite of his instincts, and the results were great. This was only a sitcom, but maybe there is something here.
If we did everything opposite to what we were told (the Costanza diet), we could hardly be worse off than we are today.
What is absolutely crucial to understand is this. We need to stop lying to ourselves. We lie to ourselves that we are providing good advice. We lie to ourselves that people would be just fine if they followed the Eat Less, Move More model. It is simply not true. It is a lie that we tell ourselves so that we do not have to face the hard truth that we are failing.
It is very difficult to face the cold steel of logic that says that all of our medical training, resources and money have been completely for waste. We have not helped anybody. Instead, if anything, we have made it worse. After 50 years, we are making the problem worse. So instead, we lie to ourselves that this is a difficult problem, and we are doing the best we can. We need to stop pretending that we are doing a good job. We are not. We are bad doctors. We are bad dieticians. We are doing an absolutely, horrible job of managing obesity. The proof, as they say, is in the pudding.
But it is so hard to speak the truth. You become as popular as a turd in a punchbowl. For example, Nina Teicholz recently wrote a brilliant and courageous article trying to bring some real change in the USDA dietary guidelines. For this she is relentlessly attacked by certain individuals like Dr. David Katz. Let’s follow the logic here. We’ve given a low-fat, calorie reduced diet advice (fact). We’ve developed a critical obesity and diabetes epidemic (fact). So, logically, changing course may be a good thing.
Of course, that’s not the way people like Dr. David Katz sees it. He argues over and over again to continue with our current advice. Why is he so stupid? The proof is in the pudding. Our current advice got us into this mess. We won’t get out of it by following the same failed advice. It matters not even a little bit, WHY you think the current advice is good. It failed. Face it. But I don’t really think he is that stupid. Rather it is a case of cognitive dissonance.
The truth is that influential people like the pompous Katz have staked their reputation on this advice, and it is better for them that millions of people be condemned to obesity, diabetes, blindness, amputation, dialysis etc rather than their reputation be smirched. He would rather lie to himself, than acknowledge the truth which is plainly before his very eyes. No, it is far easier for him to blame the millions of victims here. For example, he write “The DGAC (Dietary Guidelines Advisory Committee) is excellent”. Excellent except for the raging diabesity epidemic. He writes in another article “I have neither eggs, nor eggplants to sell you” praising the guidelines. No, only your books full of idiotic advice.
Only by acknowledging the truth, can we start the catharsis. We can start the healing, but only by facing the cold, hard, difficult truth. We are FAILING. For obesity, as for type 2 diabetes, we get an ‘F’ for ‘Fat’. Time to change our advice. The sooner, the better.