The main role of fibre is that of an anti-nutrient.  By various mechanisms such as bulking and viscosity the absorption of nutrient may be slowed in the GI tract.  This is especially beneficial in the absorption of glucose which tends to cause insulin to spike with meals.  This study illustrates the effect of fibre. Thirteen type 2 diabetic patients were given identical 55% carbohydrate liquid meals.  The only difference was the addition of fibre in one group.
Both the glucose peaks as well as the insulin peaks were reduced simply with the addition of the fibre.  Because insulin is the main driver of obesity and diabetes, anything that tends to reduce insulin is beneficial.  In essence, fibre acts as a sort of ‘antidote’ to the carbohydrate (poison).
This works out great, because virtually all plant foods, in their natural, unrefined state contain varying degrees of fibre!  Nature has pre-packaged the poison with the antidote.  Dietary protein and fat do not usually contain fibre because you do not need the antidote if you do take the poison.  The danger arises when you process the whole plant food to remove the fibre (as in white sugar and white flour).  Now you are ingesting the poison without the antidote.
Westernized diets, high in refined carbohydrates exposes us to high levels of insulin because we have removed the protective effect of the fibre.  Other traditional societies also eat high levels of carbohydrate.  The Okinawans for instance eat a diet high in sweet potato.  Approximately 80% of their diet is carbohydrate.  However, they are also eating copious amounts of fibre which provides protection.  Until recently, they were one of the longest lived peoples on earth – one of the Blue Zone populations.
The toxicity does not lie in the food, the toxicity lies in the processing.

This explains the interaction between fibre intake and type 2 diabetes.  Dr. Walter Willett of Harvard examined the large Nurse’s Health Study 1 and 2. 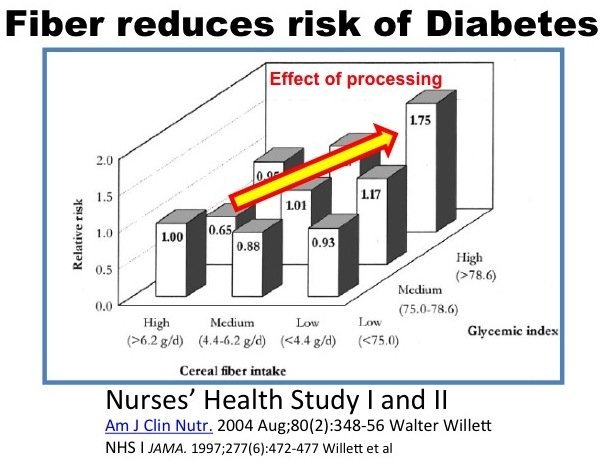 With a high glycemic index diet, you can see that the risk of type 2 diabetes depends upon the cereal fibre intake.  If you have a high glycemic index diet and have a high intake of cereal fibre (upper left) then the risk of type 2 diabetes is not increased.  Here the reference is 1.0 which means that anything close to 1.0 indicates no increased risk.  In essence, these people are taking a high level of ‘poison’ (the high glycemic index) but also taking a high level of ‘antidote’ (the fibre) at the same time.
The group that takes a low glycemic index (low level of ‘poison’) but a low level of fibre (low level of ‘antidote’) also does not have an increased risk of diabetes.  But just look at what happens when you take a high glycemic index diet (high level of ‘poison’) and a low level of fibre (low level of ‘antidote’).  The odds ratio goes up to 1.75.  Translated into English, this means that the risk of developing diabetes is increased by 75% by follow this deadly combination.  This is the exact effect of processing carbohydrates.
The processing of cereal grains removes both the fibre and fat.  This also has the effect of increasing the glycemic index.  The grain (mostly wheat) is further processed by a mechanical flour mill, rather than a traditional stone grinder which grinds the wheat into a very fine powder.  Because of this grinding, the body finds it very easy to absorb and therefore the glycemic index.
This is far from an isolated finding. In the Health Professionals Followup study of 42,759 men with a 6 year follow up, essentially the same result was found by Dr. Willett.  Diets with a high glycemic load (poison) and also high fibre (antidote) confers no extra risk of type 2 Diabetes.  Low glycemic load (poison) and low fibre (antidote) also has no increased risk.  But high glycemic load (poison) and low fibre (antidote) increases the risk to 217% of baseline.  Yikes!

In a prospective cohort of 59,000 black women, the same results were confirmed.  These women were broken into 5 groups.  The Q5 group had the highest glycemic load diet and Q1 had the lowest.  Compared to the lowest group, the Q5 group had a 23% increased risk of diabetes.  They were again broken into 5 groups based on intake of cereal fibre.  The highest intake group had an 18% lower risk of diabetes.
We can now modify our Hormonal Obesity Theory to include the protective effect of fibre.
Carbohydrates in their natural state, with the exception of honey, always contains fibre.  The toxicity lies in the processing.  In fact, the toxicity of processing does not merely stop at carbohydrates but to all foods.  Processed fats for instance, are some of the most potent atherogenic agents in the food world.  As saturated natural fats such as coconut oil and lard became demonized, we started to turn to processed polyunsaturated fats such as canola and corn oil.  Since they did not have great shelf life due to a tendency to go rancid, food manufacturers started to hydrogenate them.  Result?  Trans fats.  One of the few things modern nutritionists agree is bad for us.
Meats have also recently become processed foods.  It also has become clear that processed meats may be much more dangerous to us than unprocessed ones.  Some studies show an increased mortality.  Other studies link processed meats to cancer.  Nitrates, for instance, used in many processed meats may be the harmful agent.  In any case, the toxicity lies in the processing.
This is where junk food is so harmful to us.  By its very definition, junk food is highly processed food.  It may be high in carbohydrate, high in fat or high in protein.  It almost does not matter.  It is the processing of foods into a form that our bodies are not evolved to handle that is toxic.  The food writer extraordinaire Michael Pollan always has exhorted us to eat Real Food, not “edible food-like substances”.  What amazing wisdom delivered so succinctly!
Continue to Hormonal Obesity XVIII here
Begin here with Calories I
See the entire lecture – The Aetiology of Obesity 2/6 – The New Science of Diabesity