Looking back over the last 40 years, it’s hard to understand how we could have been so gullible. We believed that fat, and more specifically saturated fat (found primarily in animal foods), was thought to increase cholesterol and cause heart disease.  Instead, we should switch to ‘heart healthy’ vegetable oils, like cottonseed, corn, safflower and soy oils. But recent evidence suggests this was a Faustian bargain. The industrially processed seed oils were much, much worse. It was all a terrible mistake that began with Crisco.
Cotton plantations for fabric were cultivated in the United States as early as 1736. Prior to this, it was largely an ornamental plant. At first, most cotton was home-spun into garments, but the success of the crop meant that some could be exported to England. From a modest 600 pounds of cotton in 1784, it grew to over 200,000 by 1790. The invention of the cotton-gin by Eli Whitney in 1793 led to a staggering 40,000,000 pounds of cotton production. 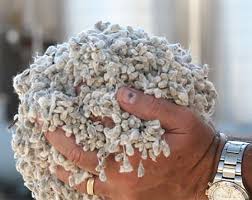 But cotton is actually two crops – the fiber and the seed. For every 100 pounds of fiber, there was 162 pounds of cotton seeds which were largely useless. Only 5% of this seed was required for planting. Some could be used for livestock feed but there was still a mountain of garbage. What could be done with this garbage? Mostly it was left to rot or simply dumped illegally into rivers. It was toxic waste.
Meanwhile, in the 1820’s and 1830’s increased demand for oil used in cooking and lighting from a rising population and decreased supply of whale oil meant that prices rose steeply. Enterprising entrepreneurs tried to crush the worthless cotton seeds to extract the oil, but it was not until the 1850s that the technology matured to the point that commercial production could commence. But in 1859, something happened that would transform the modern world. Colonel Drake struck oil in Pennsylvania in 1859 introducing a massive supply of fossil fuels to the modern world.  Before long, the demand for cottonseed oil for lighting had completely evaporated and cottonseeds went back to being classified as toxic waste. 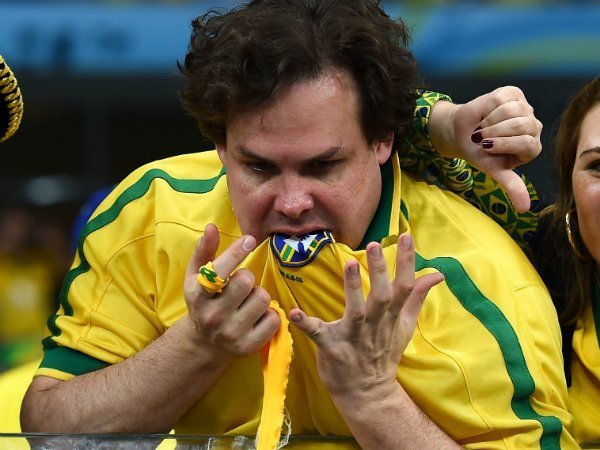 With lots of cottonseed oil, but no demand, it was added illicitly to animal fats and lards. There was no evidence that this was, in any way safe for human consumption. We don’t eat our cotton T-shirts after all. Similarly, cottonseed oil, being light in flavor and slightly yellow was blended with olive oil to reduce costs. This led to Italy completely banning the adulterated American olive oil in 1883. The Proctor & Gamble company used cottonseed oil for the manufacture of candles and soap, but soon discovered that they could use a chemical process to partially hydrogenate cottonseed oil into a solid fat that resembled lard. This process produced what are now called ‘Trans’ fats, making this product extremely versatile in the kitchen, even if nobody actually knew whether we should be shoving this former toxic waste into our mouths.
It made pastry flakier. It could be used for frying. It could be used in baking. Was it healthy? Nobody knew. Since this new-fangled semi-solid fat resembled food, and the decision was made to market this as food. They called this revolutionary new product Crisco, which stood for crystallized cottonseed oil.
Crisco was skillfully marketed as a cheaper alternative to lard. In 1911, Proctor & Gamble launched a brilliant campaign to put Crisco into every American household. They produced a recipe book, all of which use Crisco, of course, and gave it away for free. This was unheard of, at the time.  Advertisements of that era also proclaimed that Crisco was easier to digest, cheaper and healthier due to its plant origins. That cottonseeds were essentially garbage was not mentioned. Over the next 3 decades, Crisco and other cottonseed oils dominated the kitchens of America, displacing lard.
By the 1950s, cottonseed oil itself was getting expensive and Crisco once again turned to a cheaper alternative, soybean oil. The soybean itself took an improbable route to the American kitchen. Originally from Asia, soybeans were introduced to North America in 1765, having been domesticated in China as far back as 7000 BC. Soybeans are approximately 18% oil and 38% protein, making it ideal as food for livestock or for industrial purposes (paint, engine lubricants).
Since Americans ate almost no tofu prior to World War II, little or no soybeans made it into the American diet. Things began to change during the Great Depression, when large areas of the United States were stricken by severe drought – the Dust Bowl. Soybeans could help regenerate the soil through their ability to fix nitrogen. It turns out that the great American Plains were ideal for growing soybeans, so they quickly became the second most lucrative crop, just behind corn. 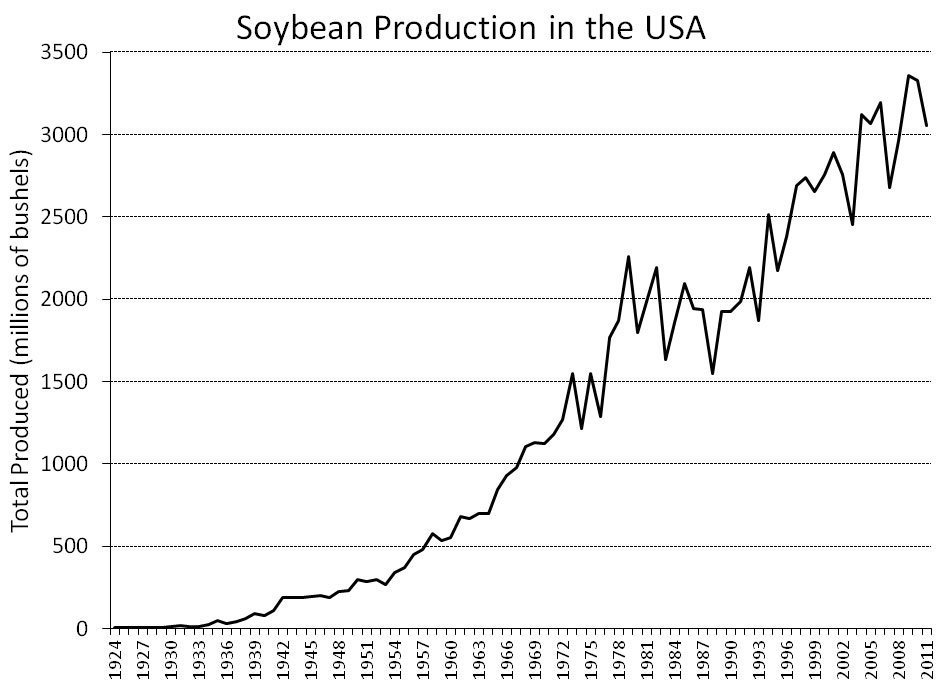 Meanwhile, in 1924, the American Heart Association was formed. As Nina Teicholz reports in her book, The Big Fat Surprise, It was not the powerful behemoth it is today, but just a collection of heart specialists meeting occasionally to discuss professional matters. In 1948, this sleepy group of cardiologists were transformed by a $1.5 million donation from Proctor & Gamble, (maker of hydrogenated trans-fat laden Crisco – yay). The war to replace animal fats with vegetable oils was on. The Faustian deal was made – the health of a nation for some filthy lucre $$$.
By the 1960s and 1970s, led by Ancel Keys, the new dietary villain was saturated fats, the type found in more frequently in animal foods like meat and dairy. The American Heart Association (AHA) wrote the world’s first official recommendations in 1961 recommending that we “reduce intake of total fat, saturated fat and cholesterol. Increase intake of polyunsaturated fat”. In other word, avoid animal fat and eat ‘heart-healthy’ vegetable oils, high in polyunsaturated fats, like Crisco. This advice carried forward to the influential 1977 Dietary Guidelines for Americans.
The American Heart Association threw its now considerable market-moving influence into making sure that America ate less fat, and less saturated fat. The Center for Science in the Public Interest (CSPI), for example, declared the switch from beef tallow and other saturated fats to trans-fat laden partially hydrogenated oils as “a great boon to Americans’ arteries’. Don’t eat butter, they said. Instead, replace it with the partially hydrogenated vegetable oil (read: trans-fats) known as margarine. That edible tub of plastic was much healthier than the butter that humans had been consuming for at least 3000 years, they said. Even as late as 1990 the CPSI refused to acknowledge the dangers of trans fats writing, famously their bottom line – “Trans, shmans. You should eat less fat”. 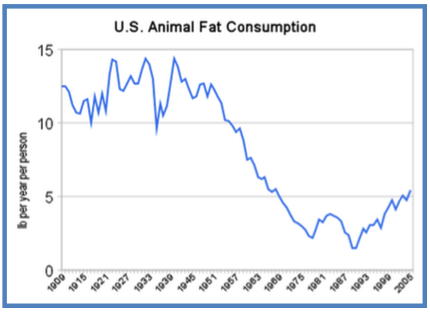 In 1994, the CSPI struck fear into movie-goers hearts with a brilliant scare campaign. Movie popcorn at that time popped in coconut oil, which was largely saturated fats. The CSPI declared that a medium sized bag of movie popcorn had more ‘artery clogging fat than a bacon-and eggs breakfast, a Big Mac and fries for lunch, and a steak dinner with all the trimmings – combined!” Movie popcorn sales plunged, and theatres raced to replace their coconut oil with partially hydrogenated vegetable oils. Yes, trans-fats. Before that, the war to rid the American public of beef tallow, the secret ingredient of McDonald’s French fries, resulted in the switch to, you guessed it, partially hydrogenated vegetable oils.
But the story was not yet done. By the 1990s, these trans fats that the AHA and the CSPI told us were supposed to be so healthy for us were implicated as major risk factors for heart disease. New studies now indicated that trans-fats just about doubled the risk of heart disease for every 2% increase in trans-fat calories. By some estimates, trans-fats were responsible for 100,000 deaths. The very ‘heart-healthy’ foods the AHA recommended we eat were actually giving us heart attacks. The irony. The irony. By November 2013, the US Food and Drug Administration removed partially hydrogenated oils from the list of human foods ‘Generally Recognized as Safe’. Yes, the AHA had been telling us to eat poison for decades.
Industrial seed oils, such as cottonseed are high in the omega-6 fat linoleic acid.  Linoleic acid is called the parent omega-6 fat because other omega-6 fats, such as gamma linolenic acid (GLA) and arachidonic acid are formed from it.  During evolutionary times, the intake of linoleic acid would have only come from whole foods, such as eggs, nuts and seeds, whereas isolated omega-6 intake from industrial seed oils would have been zero. However, Crisco, introduced an isolated and adulterated type of linoleic acid into our diet.  Thus, the intake of linoleic acid has dramatically increased and from a source that humans have never consumed before. These omega-6 seed oils can now be found in nearly all manufactured foods and are also found in grocery aisles in plastic bottles for cooking.  Unfortunately, these oils are highly susceptible to heat, light, and air and are exposed to all three during their processing.  Thus, while linoleic acid coming from whole foods such as nuts and seeds may actually be beneficial, the adulterated linoleic acid found in industrial seed oils is not. 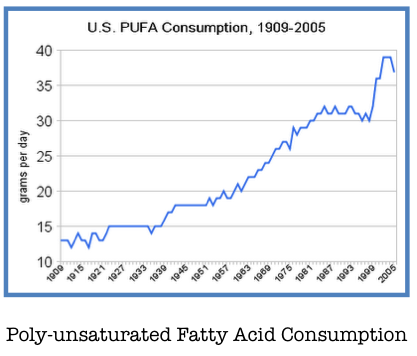 So how do we know which are healthy fats, and which are unhealthy fats? Unsurprisingly, natural fats, whether they come from animal (meat, dairy) or plant sources (olive, avocado, nut) are generally healthy. Highly processed, industrial seed oils tend to be unhealthy. Let’s face the facts – we ate vegetable oils because they were CHEAP, not because they were healthy.
For more information see the fantastic book by Nina Teicholz The Big Fat Surprise.