What we’d all love to believe is that it is the person you are on the inside that counts the most. It shouldn’t matter what you look like on the outside. I’m speaking here on the issue of weight, not the color of your skin, your height, or your hair color. As a child, a Chinese immigrant growing up in a mostly white suburb of Toronto, I know how it feels to want to be white. But I’m grown up now (mostly) and believe that we should accept ourselves and others no matter their weight. But let’s live in the real world, because that’s mostly just a dream.
From a purely medical standpoint, many diseases are related to excess body fat. As part of the metabolic syndrome, it increases your risk of heart disease, stroke and cancer. Type 2 diabetes, closely related to increased body fat, is also the leading cause of blindness, kidney disease, non-traumatic amputations and infections. I treat many such cases as a medical specialist. And yes, in those cases, losing weight is likely the most important thing you can do to improve your health. A list of medically accepted weight loss benefits includes:

But there are many people who are not overweight, as defined by Body Mass Index (BMI), and still metabolically unhealthy. And there are many people who are overweight (again, defined by BMI) and metabolically healthy. So, weight is not the entire story. Further, there are many other reasons why somebody should want to lose weight, other than the health benefits. One of the most important, although we all like to pretend otherwise is cold hard cash. Let’s be clear. Thin people make more money.
Weight discrimination creates a lot of unconscious bias. A lot. Many people unwittingly perceive overweight people as lazy, gluttonous, and lacking will power. This is the direct result of the ‘Calories In, Calories Out’ crowd, including most health professionals and researchers. Believing in the erroneous ‘Energy Balance Equation’, they imagine that weight loss is such a simple equation that everybody has the knowledge to lose weight. Therefore, the only missing piece is the willpower to follow through. That the obesity crisis is in reality a worldwide collective loss of willpower. Therefore, your excess weight is simply a manifestation of your underlying lack of willpower. Obesity, for them, is a character defect. For the ‘A calorie is a calorie’ crowd, obesity is not merely an increased weight, it is a direct measurement of your underlying strength of character. The idea that you just need to ‘Eat Less and Move More’ and that obesity is simply a lack of willpower is idiotic.
This is also a highly dangerous concept. Consider the overweight person who comes to a health professional for advice on how to lose weight. “Eat less, move more” they are told. But they don’t lose weight. So, there are two possibilities:

The second option is much more likely to be correct. Consider a teacher with 100 students. If one child fails, it may be the child’s fault. Perhaps he or she did not study. Perhaps they were playing too many video games. But what if 70 children fail? Is it the children’s fault, or more likely the teacher’s fault? In America, 70% of adults are overweight or obese. Is the problem with the majority of Americans today, or is the problem with the dietary advice we’ve been given? 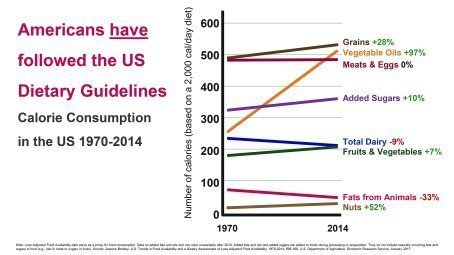 Indeed, since the advent of the Dietary Guidelines for Americans in 1977, consumption data from the United States Department of Agriculture shows that Americans have been indeed been doing exactly what they have been told to. Americans have eaten less meat and dairy and replaced their animal fats with vegetable oils. We’ve eaten more grains, fruits and vegetables. What did we get for that? A tsunami of obesity the likes of which the world has never seen.
And despite all the evidence, most all health professionals believe that option #1 is correct. This places the blame squarely on the advice taker, not the advice giver. Since health professionals are the advice givers, this is naturally their preferred explanation of why people don’t lose weight with this puerile advice. It not their fault. It’s yours. It doesn’t seem to matter that 99% of people who try the calorie restricted diet fail to lose weight over the long term. That every single study of this ‘Eat Less, Move More’ approach has failed. Every last one.
Nevertheless, because of this prevailing view that obesity is a character failure, studies consistently find that obese individuals are viewed as less desirable subordinates, coworkers and bosses in the workplace. They are perceived, erroneously as less agreeable and less emotionally stable. Mostly, people think they are lazy and lack self-discipline. This always struck me as slightly odd. Considering the lengths to which most people have gone to try to lose weight, ‘lack of self-discipline’ is one of the least accurate descriptions of most of the overweight people in my practice. Women, as is often the case, are judged more harshly than men. 60% of overweight women consider that they have been on the receiving end of weight discrimination compared to only 40% of men. 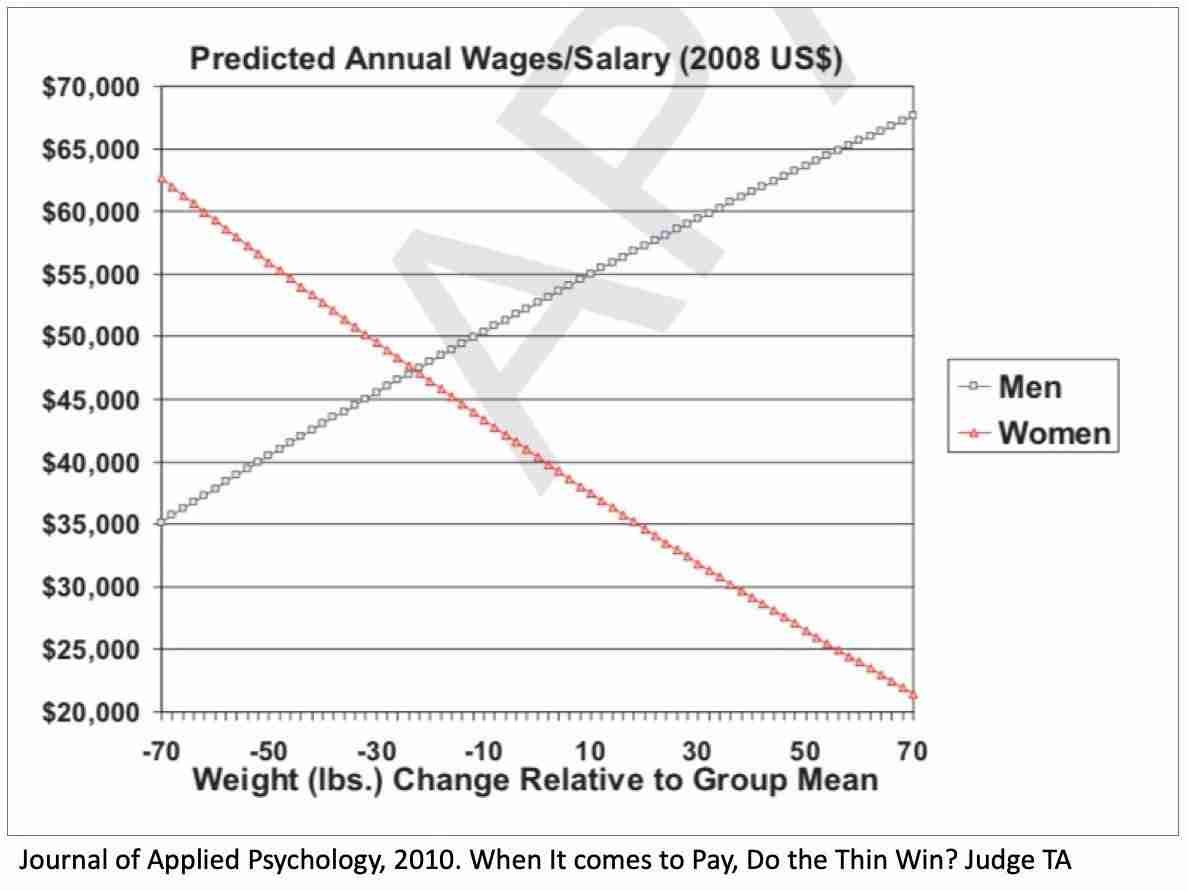 To put it into concrete terms, look at the effect of weight on salary. Weight affects salary significantly, but the effect is different for men and woman. For women, the skinnier you are, the more money you’ll make, even to a startling 70 pounds under the average weight. Women are punished for any weight gain, even above anorexic levels. For American women, a 25-pound weight gain produces an average decrease in salary of $15,572 per year. Very thin women earn approximately $22,000 more than an average weight woman. Very heavy women earn about $19,000 less than the average. The opposite holds true for men, who earn more the heavier they are.
But both men and women who are obese face the ‘glass ceiling’ – a term usually applied to the invisible barrier towards career advancement of women, it applies equally to those who are heavy. There is an obvious discrimination against fat CEOs. In a study from 2009 compared to 36% of the general male population. But 61% of top male CEOs were overweight (BMI 25-29.9) indicating a level of tolerance for those who are only modestly heavier than the average.
The situation for women is much starker. Only 3% of top female CEOs were obese compared to 38% of the general population. But only 22% of top female CEOs were overweight compared to 29% of the general population. Corporate America tolerates overweight men, but not women leaders. About 1/3 of Americans are obese, and they almost never make it to the top of the corporate world.
So, for all the talk that it’s what inside that counts, let’s be real for a second. Let’s face the truth, despite the fact that it kind of sucks. The outside counts, too. Not just for health, but also for wealth.