Thoughts on The Plant Based diet

Recently there has been many media outlets that promote the idea of a plant based diet, often with the unspoken assumption that such a diet is healthier for humans than a diet based on animals. To me, using the phrase ‘Plant-based diet’ indicates that the user does not truly understand human nutrition. Let me explain. Let’s leave aside all ethical and potential environmental differences of eating meat. They are debatable, and a completely separate issue from what I am most concerned about, the effect on human health.  A plant based diet is not automatically a healthy diet. There are healthy plant based diets and there are horribly unhealthy plant based diets. So, the adjective ‘plant based’ to describe a diet is completely meaningless. It would be just as informative to base a diet on foods that have less than 4 syllables.
For example, a completely vegan diet may be composed mainly of white bread, jam, sugar, candy, donuts and potato chips. But it’s not healthy in any way, and I don’t think anybody will disagree with me about that. So the words ‘plant based’ has no relevance whatsoever with regards to whether a diet is healthy or not. It’s like saying that I hired a computer programmer because he’s really tall. Who cares? If I was putting together a basketball team, that would be relevant, but not for computer programming. So, if I tell somebody to eat a plant based diet, does it mean that it is a healthy diet? No. Does it mean that it’s unhealthy? No. It’s simply irrelevant. And that’s how you know that the person who is uttering these nonsensical statements simply does not understand nutrition.
Sometimes, the term ‘Whole Foods Plant Based’ diet are considered together. A whole foods diet, which is comprised of eating foods to as close to their natural form as possible is quite healthy. Whether they are based on plants or animals is just irrelevant. So a ‘Whole Foods’ diet is healthy, but the addition of ‘plant based’ does not add to its healthiness. 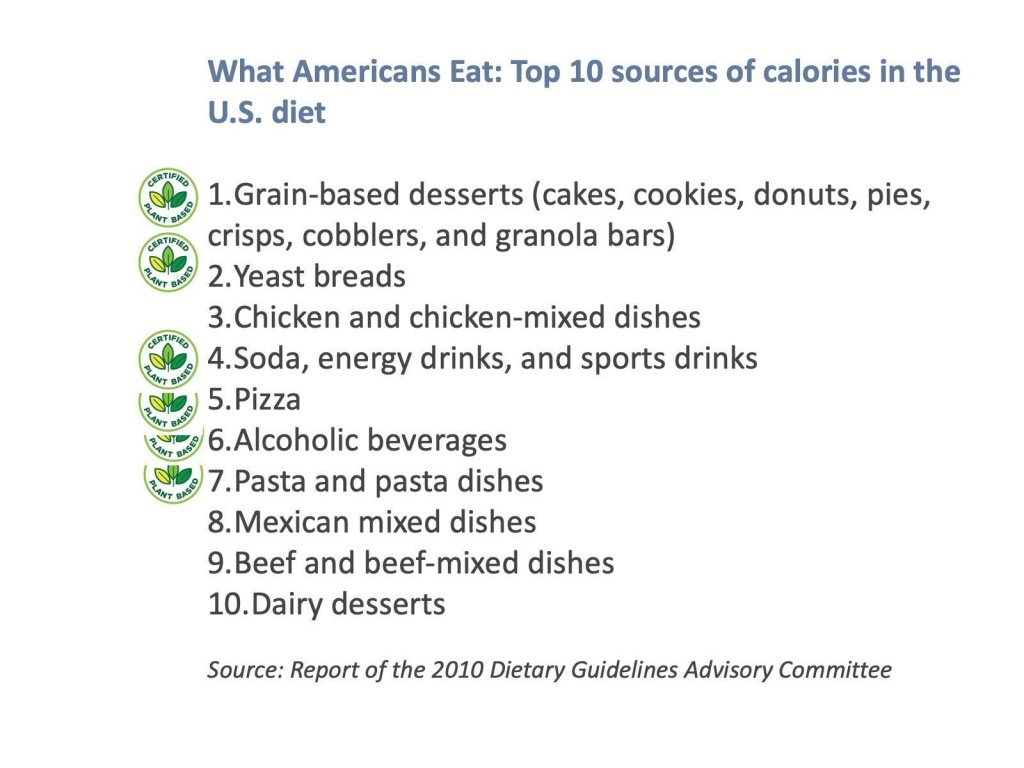 Let’s look at the top 10 sources of calories in the American diet. Most of the top 10 foods are recognizably poor choices. grain based desserts, soda, and alcohol are simply not that slimming or healthy. Yet, they are certifiably 100% plant based. Fully 6 of the top 7 choices of foods in America are plant based. Dairy products fall somewhere in the grey zone. They are not plant based, and neither are they meat based. Most pizzas are made with flour, tomato sauce and cheese. Yes, there is often some meat but pizza is still mostly plant, so can be considered plant based, although not vegetarian.
So here’s the thing that is really hard to understand. The Standard American Diet over the last 40 years, has obviously been a very bad one. It had lead to an epidemic of obesity, an epidemic of the closely associated type 2 diabetes, and even to rising rates of colorectal cancer. Yet it is almost purely plant based. So, if this horrible diet is a plant based diet, then why would health authorities be exhorting us to follow a ‘plant based’ diet? Does our boss yell “Why did you hire that really short computer guy?” My mind boggles at the utter insanity of the situation.
The situation is now pushed on mainstream media by many of the big food companies because of the incredible success of the fake meat companies. In hot pursuit of making a plant based diet easier to follow, we can now buy foods that are plant based but taste very similar to real meat. How did they perform this bit of chemical wizardry? Let’s look at the ingredients. Pea protein isolate? expeller-pressed canola oil? Yeast Extract? Modified Food starch? 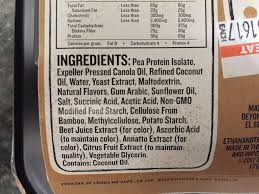 Are these ingredients your grandmother would have recognized? Are they whole foods? What in the h*** are they extracting from the yeast, and do I really want to know? Peas are whole foods. Pea protein isolates are not. So let’s be clear that this is NOT part of a ‘Whole Food Plant Based’ diet.
I have nothing against veganism or vegetarianism. It is certainly possible to be healthy on such diets. It’s also possible to get really sick from such diets, even when followed to a T. Several high profile vegans on YouTube have recently been caught eating meat. The furor from their community was vicious. But the reasons are always the same. She did it to save her own health.
The reasons are fairly simple to understand. We are animals. Eating plants provides some of the essential nutrients, but not all. Therefore it is necessary to eat a variety of plant types to get all the essential nutrients. Some vitamins, like B12, are kind of tough to get in plants. Eating the flesh of animals provides almost everything our bodies require, because we are animals. That a simple scientific truth. The ethics and environmental cost of eating animals is not one that I want to debate, since there are no simple answers and tons of rancorous debates.
From a health perspective, we measure proteins in terms of biological value. This is the percentage of proteins that we eat which are incorporated into our bodies. A whole egg, for example has a stellar value of 100, where wheat gluten is down at 64. By combining various plants, like beans and corn, you can get a value close to that. This is why rice and beans is also such a classic combination.
Almost all human cultures have recognized that meat is more nutritious than vegetables, although usually harder and more expensive to obtain. This is why traditionally, special occasions call for a roasted animal such as a Hawaiin luau or killing the fatted calf, rather than a kale salad. We eat a Christmas ham or a Thanksgiving turkey rather than a Christmas bean salad.
So, it’s time to retire the meaningless phrase ‘plant based diet’. It’s neither meaningful nor useful. It merely marks the person uttering this horrific phrase as somebody who has not thought deeply about nutrition.