The Tyranny of Breakfast – How to Lose Weight V

Breakfast is, without question, the most controversial meal of the day. The advice to eat something, anything as soon as you step out of bed has often been regurgitated by health professionals without question.  People confess to skipping breakfast like they’ve committed a great nutritional crime.
Breakfast really needs to be downgraded from “most important meal of the day” to “meal”. Different nations have different breakfast traditions. The big “American” breakfast contrasts directly with the French “petit dejeuner” or “small lunch”. The key word here is ‘small’. Obesity tends to be a much larger problem, of course, in the United States.
The greatest problem is that breakfast foods are often little more than dessert in disguise, containing vast quantities of highly processed carbohydrates and sugar. Breakfast cereals, particularly those targeted towards children, are among the worst offenders. On average, they contained 40% more sugar than those targeted towards adults. Not surprisingly, almost all cereals for children contained sugar, and 10 contained more than 50% sugar by weight. Only ten of 181 (5.5%) met the standard for “low sugar”. In the diets of children under 8, breakfast cereals rank only behind candy, cookies, ice cream and sugared drinks as a source of dietary sugar. However, while those other foods are obviously desserts, breakfast cereal masquerades as a healthy food, helped along with vast marketing budgets. Adding whole grains may improve the healthy image, but it doesn’t reduce the sugar content. 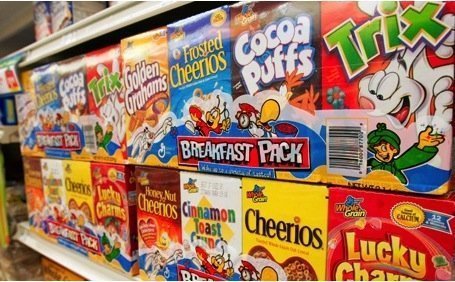 While cereal has been declining in popularity since the mid 1990s, it still managed $10 billion in sales in 2013, down from $13.9 billion in 2000. Declining birth rates means fewer children, a key demographic. The rapidly growing populations of aging baby boomers are less likely consumers. Increased ethnic populations have their own traditional breakfast foods. Recently popular diets including the low carbohydrate, gluten free diet, Paleo, and whole foods diets all shun the breakfast cereal. A simple rule to follow is this. Don’t eat sugared breakfast cereal. If you must, eat cereals with less than 4 grams of sugar per serving or less.
Many breakfast items from the bakery are also thinly disguised desserts. Examples include muffins, cakes, Danishes, and banana bread. Not only do they contain significant amounts of refined carbohydrates, they are often sweetened with sugars and jams. Bread often contains sugar, and is eaten with sugary jams and jellies. Peanut butter often contains added sugars as well. Made traditionally from just peanuts, they are often mixed with honey or other sweeteners. 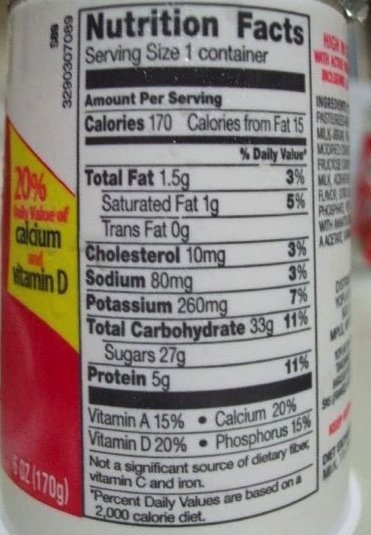 Traditional and Greek yogurts are nutritious foods. However, commercial yogurts are thinly disguised desserts with large amounts of sugar and fruit flavorings. A serving of Yoplait fruit yogurt contains 27 grams (almost 7 teaspoons of sugar). Oatmeal is another traditional and healthy food. Whole oats and steel cut oats require long cooking times because they contain significant amounts of fibre that requires heat and time to break down. This too has been corrupted into the thinly disguised dessert known as instant oatmeal. Heavy processing and refining allows instant cooking, and large amounts of sugar and flavors are added. Most of the nutritional content was lost long ago. Quaker’s flavored instant oatmeal may contain 13 grams of sugar per serving (3 ¼ teaspoons of sugar). Instant cream of wheat experiences the same problems. A single serving has 16 grams of sugar (4 teaspoons of sugar). With rolled oats and dried fruit, granola and granola bars attempt to disguise themselves as healthy. They are often heavily sugared and contain extra chocolate chips or marshmallows.
So, what to eat for breakfast? If you are not hungry – then don’t eat anything at all. It is perfectly acceptable to break your fast at noon with a piece of grilled salmon with a side salad. Technically, this will be your ‘break fast’. There is nothing inherently wrong with eating breakfast in the morning either. It is just like any other meal. However, in the morning rush, there is a tendency to reach for convenient prepackaged, heavily processed, and heavily sugared foods. Eat whole, unprocessed foods at all meals, including breakfast. If you find that you do not have time to eat – then don’t. Again – simplify your life. The notion that there is something mystical about eating immediately upon waking is perplexing.
Eggs, previously shunned due to concerns about dietary cholesterol, can be enjoyed in a variety of ways – scrambled, over easy, sunny side up, hard-boiled, soft boiled, poached etc. Egg whites are high in protein, and the yolk contains many vitamins and minerals, including choline and selenium. Eggs are particularly good sources of lutein and zeaxanthin, antioxidants that may help protect against eye problems like macular degeneration and cataracts. The cholesterol in eggs may actually help cholesterol profile by changing particles to the larger, less atherogenic particles. Indeed, large epidemiologic studies have failed to link increased egg consumption to increased heart disease. Most of all, eat eggs because they are delicious, whole, unprocessed foods.

The healthy snack is one of the greatest weight loss deceptions. The ‘grazing is healthy’ myth has attained legendary status. Constant stimulation of insulin eventually leads to insulin resistance. Why people ever thought ‘grazing’ was healthy, I don’t know for sure. This advice is directly opposite of virtually all food traditions. Even as recently as the 1960’s most people still ate three meals per day. Snacking was met with an icy glare. “You’ll ruin your dinner”. Grandma, of course was right. Snacking just makes you fat.
This idea that ‘grazing’ is beneficial likely started with diabetics taking insulin. Normally, the body constantly adjusts insulin for the foods eaten. Artificially injecting insulin created the problem of volatile blood sugars. Diabetics need to match the food to the insulin injections, rather than the other way around. By eating constant smaller meals, blood sugars could more easily be matched to the insulin injection regimen.
Somehow, without anybody really noticing, it was decided that if diabetics ate like this, then everybody else should as well. No trials or studies were done. There was no scientific debate. Eventually, healthy ‘grazing’ became engrained into nutritional lore. Food companies, of course, could not be more thrilled. They encouraged the extra meal at every turn. Cha ching. Cha ching. It was all cash in the bank for them. The problem was that people were eating too much. The solution was not to eat all the time.
Snacks are often little more than thinly disguised desserts. Most contain prodigious amounts of refined flour and sugar. These pre-packaged convenience foods have taken over the supermarket shelves. Cookies, muffins, pudding, Jello, fruit roll ups/ fruit leather, chocolate bars, cereal bars, granola bars and biscuits are all best avoided. Rice cakes advertising themselves as low fat, compensate for lack of taste with sugar. Canned or processed fruit conceal buckets of sugar behind the healthy image of the fruit. A serving of Mott’s Applesauce contains 21g (5 ½ teaspoons of sugar). A serving of Dole canned peaches contains 18 grams (4 ½ teaspoons of sugar).

Are snacks necessary? No. Simply ask yourself this question. Are you really hungry, or just bored? Keep snacks completely out of sight. Out of sight, out of mind. If you have a snack habit, then it is best to try to replace that habit loop with one that is less destructive to your health. Perhaps a cup of green tea in the afternoon should be your new habit. There’s a simple answer to the question of what to eat at snack time. Don’t eat snacks. Period. Simplify your life.
Next article:  Beverages – How To Lose Weight VI
Start here with Calories I – How Do We Gain Weight?