Futility of Blood Sugar Lowering by Medications in T2D – T2D 15

The UKPDS (United Kingdom Prospective Diabetes Study) was a huge study undertaken in the UK to see if intensive blood glucose lowering in T2D would prevent end organ damage over long run. The DCCT study mentioned previously had already established the paradigm of tight blood sugar control in Type 1, but whether this held true for type 2 remained to be seen.
3867 newly diagnosed T2D patients who failed a 3 month lifestyle therapy trial were enrolled into an intensive group with sulfonlyureas or insulin versus conventional control (UKPDS 33). The intensive group would target a fasting glucose of less than 6.0 mmol/L. In the conventional group, drugs were only added if FBG exceeded 15. If high blood sugars was the primary cause of disease, then this intensive group should do better. We can move the sugar from the blood into the body with drugs, but the price to be paid is excessively high insulin levels. Remember that these T2D patients had a baseline level of insulin that was already high. We would raise them even further in order to lower blood sugars.
The drugs certainly were successful at lowering blood sugars. Over the 10 years of the study, the average HgbA1C was 7.0% in the drug group compared to 7.9% in the diet group. But there was a price, too. Weight gain was far worse on the drug group (an excess of 2.9 kg) and in particular, the insulin group – averaging 4 kg excessive weight gain. Low blood sugars – hypoglycaemia was also significantly increased. These, however were expected, but as discussed before, there is concern that excessive weight gain will lead to worse outcomes down the line.
The results surprised most physicians at the time. Expecting a slam dunk, there was instead some minor benefit for eye disease but they were unable to find any kind of benefits for the end points that everybody was interested in – cardiovascular disease, including heart attacks and strokes. The results were stunning. Despite reducing blood sugars, CV disease showed no benefits.
This was more than just a trivial result. Since the majority of deaths are due to CV disease, the primary goal of therapy was reduction in deaths and CV disease, not microvascular disease.
Metformin was considered separately in sub study UKPDS 34. Here 753 overweight patients with T2D were randomized to either metformin or diet control alone. Once again, over the space of over 10 years, the average blood sugar was lowered by metformin to 7.4% compared to an A1C of 8% in the conventional group. In contrast to the previous study, intensive control with metformin showed a substantial improvement in clinically important outcomes – there was a 36% decrease in death (all cause mortality) as well as a 39% decrease in risk of heart attack. That’s a very significant benefit. Metformin performed far better than the insulin/ SU group despite the fact that average blood sugar control was worse.

In other words, something was going on here, and it was not simply the blood sugar lowering that was having an effect. That is, glucotoxicity is real, but not the only player. Despite these marginal benefits, confirmation bias ensured that glucotoxicity became the established paradigm in treatment of T2D. Everything else was forgotten.

The 10 year follow up study of the UKPDS continued to show these differences. Looking at the results side by side, you can see that there is barely any benefit in the insulin/ SU group, but a substantial benefit in the metformin group – with of course, the same glucose lowering effect.
What’s the major difference between the two medication groups? Insulin! Insulin and sulfonylureas (SU) increase insulin levels. Metformin does not. Because it does not raise insulin, and insulin drives obesity, metformin does not cause weight gain.
The follow up of the 10 year insulin/SU group was finally able to show some benefits in reduction of CV disease, but the benefits are far smaller than expected. All cause mortality was reduced by 13% in the insulin/SU group compared to a far more substantial 36% in the metformin group.
This established the paradigm of glucotoxicity, but only barely for T2D. There appears to be some risk of high blood sugars, but reducing it with medications seemed to have marginal benefits at best. The results were satisfactory but only just. At the time the UKPDS study was published in 1998, there was still considerable questions about the efficacy of glucose lowering in T2D. The ACCORD study in 2008 would change all that.
Tired of all the controversy, and confident of the benefits of glucose lowering, the National Institutes for Health in the United States decided to fund an ambitious large trial called the ACCORD study (Action to Control Cardiac Risk in Diabetes). By this time, the paradigm of glucotoxicity in type 1 diabetes was well established. It seemed like only a matter of time before it was proven fact in type 2 diabetes as well.
Epidemiologic studies had clearly shown that there is a correlation between lower blood sugars and better health. Even after adjusting for other risk factors, every 1% increase in the hemoglobin A1C was associated with an 18% increase in risk of cardiovascular events, 12-14% increase risk of death and a 37% increased risk of eye disease. This agreed with the glucotoxicity paradigm that all the bad effect of diabetes in both types 1 and 2 diabetes were caused by the high blood sugars.
This was suggestive that a strategy of lowering blood sugars by intensifying the medication regimen may be effective in reducing complications. It had worked in type 1 diabetes, but the UKPDS was not able to show any benefits. Association studies cannot prove that the better blood glucose control was the deciding factor, they can only suggest hypotheses that need to be tested. The reason is that there are too many complicating factors. Those who have lower blood sugars may also be more compliant patients and follow untold numbers of healthy lifestyle decisions that those with higher blood sugars did not.
The classic example of this problem was the hormone replacement therapy (HRT) debacle. A few decades ago, it had been noticed that post-menopausal women had a much higher rate of heart disease than pre-menopausal women. Some theorized that the reason may be related to the lack of oestrogen and progesterone. Some women were taking HRT for relief of menopausal symptoms. When looking at these women, it was noted that those taking HRT had almost a 50% lower rate of heart disease than those not taking it. This association between HRT and cardiac protection became well publicized and despite the lack of rigorous evidence, it soon became prescribed worldwide, including to my mother.
Eventually, trials were designed to test this hypothesis that giving HRT to post menopausal women would have health benefits. When the results came out, the results were a complete shock. HRT did NOT reduce heart attacks. Actually, it significantly raised the risk of heart attacks, strokes, blood clots and cancers like breast cancer. One of my friends, who is a cancer specialist remarked to me a few years after this study that he noticed a huge drop in the number of breast cancer patients after widespread use of HRT was curtailed. 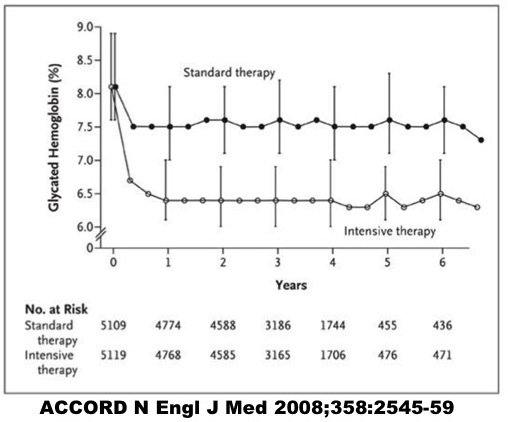 So, the mere association of low blood sugars and better outcomes must be rigorously tested. And that what we did. The ACCORD study randomly assigned two groups of people. The first group would get their standard therapy. Their A1C averaged 7.5%.
The treatment group would get intensive drug therapy to lower their blood sugars with the goal of seeing whether this intervention would reduce disease. They were successful in lowering their A1C to 6.5%, a large and meaningful reduction in blood sugars. Great.
But that’s not the question we asked. We wanted to know whether this made any difference. It sure did. When the trial results broke, there was a media firestorm. 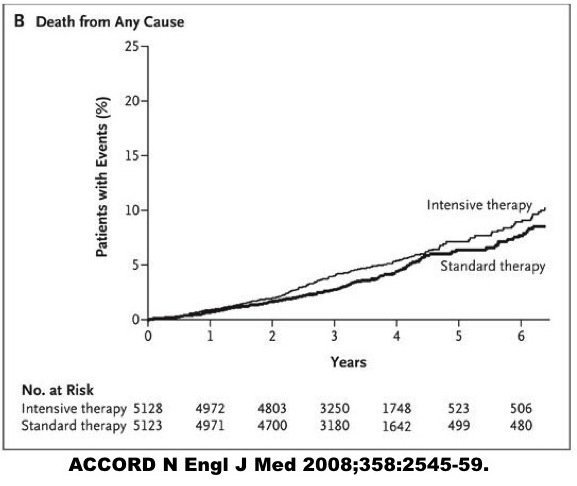 Why? Because the intensive treatment was killing people! The risk of death increased by a horrifying 21% in the intensively treated group.
Over 10,000 people were enrolled in this trial. The intensive treatment group was getting more medications to lower their blood sugars as close to normal as possible. This had been the standard advice of every doctor in the world. Every medical school student had learned that this was the proper treatment approach.
Yet the study showed that patients getting this more intensive treatment were dying at a faster rate than those who were more lax in their blood sugar.
17 months before the schedule end of the trial, the safety committee looked at the available data, and forced the premature end to this study. It was unethical to continue this study. They couldn’t give patients a treatment they now knew to possible kill patients. At the very least, it was not likely to benefit them.
There was no pre specification of which medication should be used to intensify blood glucose treatment, so in the end all were used. This included increased use of a medication called rosiglitazone or Avandia, which was very popular at the time of the trial. It’s use has since been severely curtailed due to concerns that it may cause heart attacks. Could this have been this culprit? Possible, but can’t say for sure.
In either case, what became clear was that lowering blood sugars by increasing doses of medications were not benefitting anybody. Since that time, at least 6 more randomized double blinded trials have confirmed that blood glucose lowering in type 2 diabetes is largely useless. Yet here we sit in 2016, with no better idea of how to treat type 2 diabetes than to lower blood sugars.