Why Coca-Cola Loves the Calories model 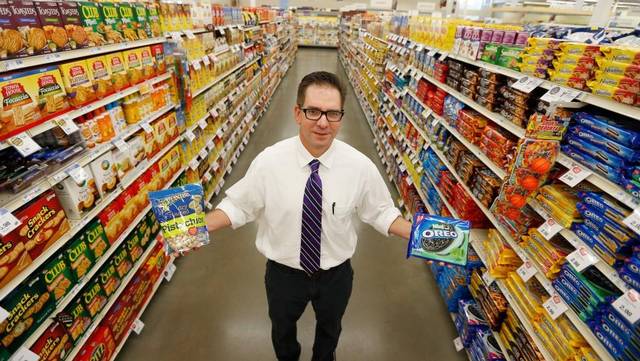 Coca-Cola loves to promote the Calories In/ Calories Out (CICO) model. As one of the leading purveyors of sugar sweetened beverages, it constitutes a significant portion of the added sugars in the American diet.
Do you remember the story of the Twinkie diet? In 2010, Mark Haub, a researcher at the Kansas State University achieved notoriety as a follower of the Twinkie diet. For 10 weeks, Haub ate a Twinkie every three hours instead of a regular meal. He also ate Doritos, oreo cookies and sugary cereal. The catch was that he would only eat 1800 calories per day of some of the most fattening foods on the planet.
In those two months, he lost 27 pounds, his LDL cholesterol got better as did his triglycerides. This gained the attention of every mainstream media outlet, including CNN. This supported the view that it was all about the calories. You could eat whatever you wanted, but as long as you reduced calories, you could still lose weight.
There was only one thing missing from this story. One glaring omission. He was paid by Coca Cola. In 2016, in response to growing criticisms about transparency, Coke released a list of researchers who took money. Mark Haub was one of those researchers relying upon Coke’s deep pockets to fund him and his kids college fund. Chump change? Hardly. Coke spent a total of $2.3 million on these ‘health professionals and scientific experts’. On the press release, Coke stated that these experts ‘state their own views and disclose their relationship with The Coca-Cola Company’.
Except that they don’t. I have not yet seen any kind of footage where the dastardly Mark Haub has admitted to accepting money from Coke. He is willing to sacrifice your health for the sake of a few dollars. But he’s not proud of it. So, he never talks about it in the hundreds of interviews and articles in the media about his Twinkie diet. In academic circles, misrepresenting your source of funding, which has grave implications for results, is tantamount to lying under oath. The original story sounded a lot better than “Coca Cola pays a guy to do an unsupervised, unverified study and claims to lose weight eating Twinkies”.

He was only outed because of bad behaviour on the part of the University of Colorado’s Global Energy Balance. What happened there? Well, Coca Cola gave millions of dollars to the University and doctors to set up a sham organization called the Global Energy Balance Network. With university blessings and ‘headed’ by doctors, it would be taken more seriously than, say a network called ‘The Coca Cola Consortium for Why Soda Doesn’t Make you Fat’ with the equally uncatchy acronym WSDMYF.
What Coke was trying to do was create a puppet organization where they could drive ‘research’ that ‘proved’ that sugar and soda does not make you fat. They carefully hid their name behind the university and the doctors, were well paid for their part.
Coca Cola’s influence is limitless. They even have the power to influence Hilary Clinton, and thus reach into the very stratospheres of power that are unreachable by mere mortals. Too bad they only use that influence to make more money and peddle more sugar water. Health of the nation? Who cares? Soda taxes are all the rage, right now. In April 2016 Hilary Clinton was a staunch backer until one mysterious day, she goes silent. No more rhetoric about supporting the soda tax.  Leaked emails show that on April 20, a Coca Cola exec wrote to Capricia Marshall (Clinton’s special assistant while First Lady) “Really??? After all we’ve done?”. Yes, Coke expected the Clinton campaign to roll over like a beaten dog. Which is exactly what they did. They were bought and paid for, and they knew it. 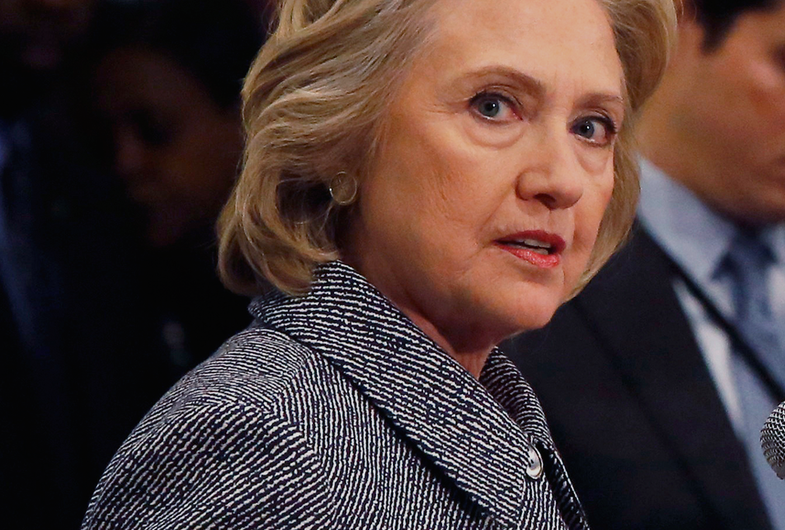 The first part in deflecting blame is to find the appropriate scapegoat. So, if obesity is not due to sugar and soda, then what could be blamed instead? Well, the easiest target is calories. If you simply blame total calories, then eating salad and drinking Coke is equally fattening, as long as they are the same number of calories.
So, logically, you could eat a plate of cookies for dinner, or an equal number of calories as salad with olive oil and salmon, and both would be equal in terms of causing obesity. Except that common sense tells you that eating cookies for dinner every night will make you fat, and eating salad every night will make you skinny.
But calories makes the perfect scapegoat. There is no brand called ‘calories’. Nobody owns the trademark ‘calories’. Nobody makes food called ‘calories’. They are totally defenseless.
The second thing is to promote exercise as a good way to burn calories. This is a good way to shift the blame onto the victims. If you are overweight, it’s now YOUR fault, not Coke’s. The problem is not all the sugar you’ve been drinking, the problem is that you are not exercising enough. Of course, in the 1950’s people never exercised for fun, either and there was no obesity. And people also spent all day sitting in front of their desk working, too.
Once the shenanigans at the Global Energy Balance were revealed, Coke went into damage control mode. Dr. Hill, who had been greedily accepting the cash, insisted that Coke had no influence on his opinions as a researcher. This was clearly nonsense and called out by his peers, as a letter written by Dr. Willett of Harvard University accused him of spreading ‘scientific nonsense’. Of course it was nonsense. But it was lucrative nonsense. 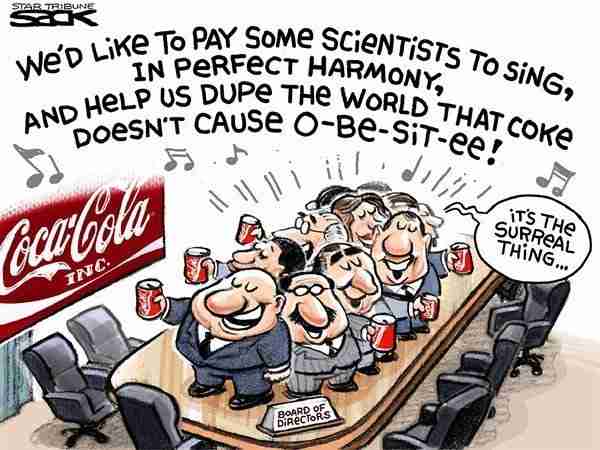 A series of emails obtained by the Associated Press also confirmed that rather than maintaining an arm’s length, Coke was actively involved in the group, including picking the groups leaders, crafting the mission statement, and logo. Dr. Hill, according to the New York Times also proposed a study to “help Coca Cola focus the blame for obesity on a lack of exercise and urged the company to pay for it”. Nice, Dr. Hill. You already knew the results of your study before you even did it?
As part of the fallout, Coca Cola increased the transparency of their funding and published a large list of places they were distributing cash. It is not altruism. It’s sponsorship. Plain and simple. The Academy of Nutrition and Dietetics, representing the dieticians of America were on the take for millions of dollars. And so was Mark Haub, finally exposed as a fraud after all these years.
Just several days ago, in the New York Times, Anahad O’Connor wrote an article clarifying the conflicting studies on the link between sugar sweetened beverages (SSB) and obesity and type 2 diabetes. Over the years, many studies have been presented – some linking SSB and some refuting that link. What was the difference? Every single study refuting the link was funded by a soda company such as Coca Cola. Shocker…
Make no mistake. A big part of Big Soda’s game plan is to hoodwink the public that all calories are equally fattening. They’ve spent millions of dollars and decades doing just that. A calorie is a calorie. Sure. But that’s not my point. Are all calories equally fattening? Will eating cookies every day lead to the same weight gain as eating salad? Only a fool believes this. Don’t be that fool.