Not surprisingly, the use of fasting for weight loss has a long history, since it’s, kind of, like, obvious. I mean, everybody understands that if you do not eat, you are highly likely to lose weight. Duh. Which makes it even more surprising how much people fear missing even a single meal, let alone fast for a prolonged period of time. They think that fasting (not eating) will make you fat. That’s kind of like saying that splashing water on your head will dry your hair. That’s modern dietetics for you. Kind of a Bizarro world.
There are still many doctors who argue that eating sugar is not bad for type 2 diabetics. Kind of makes you wonder how they got into medical school at all. Since it is quite obvious that missing meals leads to weight gain, the old bogeyman, ‘starvation mode’ is often invoked to instill fear. Tales of people ‘ruining’ their metabolism abound. Food companies, of course have eagerly ‘educated’ medical professionals about the dangers of missing meals and the safety of eating sugar. Nobody makes money when you skip meals. 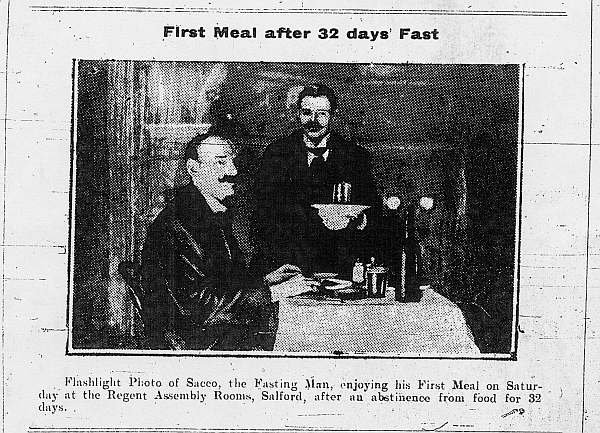 Fasting appeared in the medical literature over 1 century ago. Interestingly, they describe ‘professional fasters‘ who would fast for specific periods of time for exhibition. One professional faster went for 30 days and drank a quantity of his own urine. Talk about being starved for entertainment. Kind of like watching paint dry.  This was depicted in Franz Kafka’s short story “A Hunger Artist”. Fasting for entertainment was popular from 1883-1924. My guess is that it really is not that entertaining.
In the early 1900s, Drs. Folin and Denis described fasting as ‘a safe, harmless and effective method for reducing weight of those suffering from obesity’. Great. That’s exactly what we need. Something safe, harmless, and effective. The fact that fasting has been performed (mostly for religious purposes) for several thousand years only reinforced the long history of safety. It’s hard to argue that fasting is dangerous if people have been doing for the 5000 years. May as well argue that using soap is dangerous. Yet, myths about the dangers of fasting are everywhere.
By the early 1950’s, Dr. W. Bloom reignited interest in fasting as a therapeutic measure mostly using shorter fasting periods. However, many longer periods were also described in the literature. Dr. Gilliland reviewed fasting in the revival of the 1950’s and1960’s and reported his experience with 46 patients “whose reducing regime started with a standard absolute fast for 14 days”. Whoa. I love that. When I tell people to fast for more than 24 hours their eyes just about bug out of their head. These people had a ‘standard’ fast that lasted for 2 weeks! And that was just the beginning!
Of these, there were 14 males and 32 females. This is important because I constantly get questions about whether fasting works for females. This is primarily, I think due to a post found online that’s been viewed close to 100,000 times. What she wrote in 2012 is this – “Intermittent fasting and women: Should women fast? The few studies that exist point towards no.”
Nothing is further from the truth. There are hundreds of studies spanning over 100 years and clinical experience spanning 5000 years that point to the fact that women and men respond more or less equally except in the underweight situation. This is an easy problem. Should anybody who is seriously underweight, fast? Uh, no. You don’t have to be a genius to figure that out yourself. If you are severely underweight and fast, you could become infertile, yes. 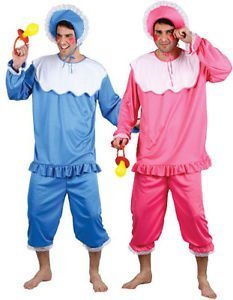 Consider the past 2000 years of human history. Are Muslim women ‘exempt’ from fasting? Are Buddhist women ‘exempt’ from fasting. Are Catholic women ‘exempt’ from fasting? So we have millions of person-years of practical experience with women and fasting. And there are no problems in 99.9% of cases. In our own clinic, where we’ve treated close to 1000 patients, I have noticed no significant difference between men and women. If anything, the women tend to do better. Men, it seems, are sometimes just big babies. I will mention here, too, that the highest success rates come when husband and wife do it together.
However, pregnant women are, in fact ‘exempt’ from fasting in almost all human religion. As are children. In both situations, this makes entirely logical sense. These people need adequate nutrients for growth, and human populations have always acknowledged this.
Let’s be clear here. This point is made that several problems come up with fasting in women. Well, they come up with men and fasting, too. Sometimes women don’t lose weight the way they want. Well, that happens with men, too. The problem of amenorrhea arises when body fat is too low. Yeah, that’s not a problem we treat with fasting. If amenorrhea or any other problems appear during fasting – stop immediately.  The women and fasting issue is just another myth designed to discourage fasting.  Virtually all case series of the past 100 years have included both men and women. 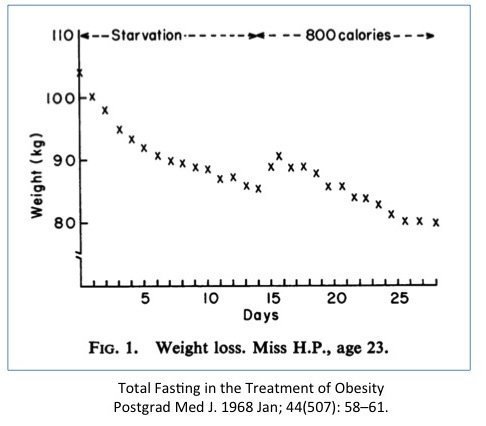 Anyway, back to the study. The patients were hospitalized into a metabolic ward during the first 14 days and only water, tea and coffee were allowed.  After that, they were discharged and asked to follow a 600-1000 calorie diet. Funny enough, 2 patients asked(!) to be readmitted for a second 14 day period of fasting because they wanted better results. Did it work? Was there ever any doubt?
Average weight loss was 17.2 pounds in 14 days. This is in excess of the roughly 1/2 pound per day of fat loss seen in more prolonged fasting. This indicates that some of the initial early weight loss is water weight. This is confirmed by the rapid regain of weight upon refeeding. It is important to understand this in order to avoid the disappointment that often accompanies the weight gain upon eating again. That quick weight loss and regain is water weight and not a reflection that the fasting ‘failed’. 44 of 46 patients completed the 2 week fasting period. One developed nausea and one simply decided against it and dropped out.
That’s a 96% success rate even for a regimen as long as a 2 week fast! This is our clinical experience as well. People always think they cannot do it without ever having tried it a single time. Once we start with fasting, patents in our Intensive Dietary Management (IDM) program quickly realize that it’s actually quite easy.
However, after the fasting period, patients were instructed to go on a low calorie diet. This was terribly unsuccessful. 50% of patients did not adhere to this diet over the ensuing 2 year follow up period. Instead of applying successful intermittent techniques, they returned to the unsuccessful constant energy restriction we discussed at the last post.
The key point here is that the natural rhythm of life is Feast and Fast. There are times that you should feast (weddings, celebrations), and there are times that you should fast. Intermittent. To constantly restrict calories for years on end is unnatural and ultimately worse, unsuccessful. 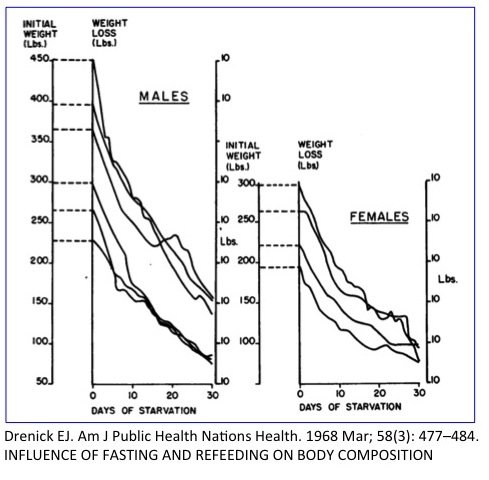 Ketones appeared in the urine starting on day 2 and persisted throughout the fasting period. All 3 diabetic patients were all off insulin by the end of the 2 weeks. One patient with severe congestive heart failure was able to walk without breathlessness by the end. This 2 week fast was not harmful, as we have been told, but extremely beneficial.
Was it hard? In fact, Dr. Gilliland describes a ‘feeling of well being’ and ‘euphoria’. Hungry? Well, no. “We did not encounter complaints of hunger after the first day. We did not meet anorexia.” These experiences were echoed by other researchers of the time.
Dr. Drenick, from the VA centre in Los Angeles, also wrote extensively about therapeutic fasting. His experience was published in 1968. This was a time of renewal of interest in fasting for weight loss. He published his experience of 6 men and 4 women (yes, again there were women in the study). Did it work? In a word, yes.
Should women fast? Yes
Should men fast? Yes
Start here with Fasting part 1
Continue here for Fasting part 11