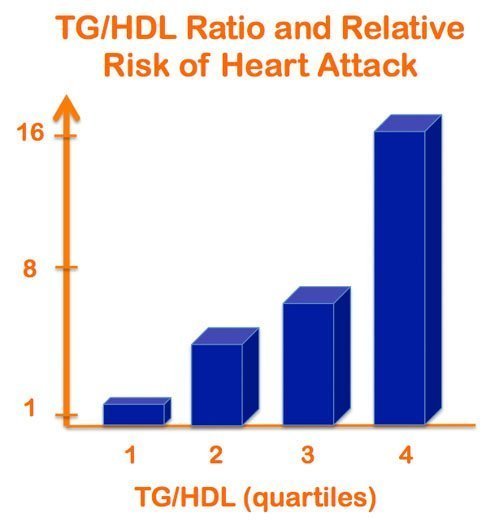 
Why should we care about high triglycerides? Doctors always obsess about LDL cholesterol and barely a word is heard about triglycerides, yet high blood triglycerides strongly and independently predict cardiovascular disease, almost as powerfully as LDL. Hypertriglyceridemia increases the risk of heart disease by as much as 61%. This is especially concerning since the average triglyceride level has been rising inexorably in the United States since 1976, along with type 2 diabetes, obesity and insulin resistance. An estimated 31% of adult Americans are estimated to have elevated triglyceride levels.
Hypertriglyceridemia by itself is unlikely to be causative in heart disease and represents an important marker of hyperinsulinemia. Patients with a rare disease called familial hyperchylomicronemia syndrome experience extremely high triglyceride levels their entire life, but rarely develop heart disease. Niacin is a medication effective at reducing triglycerides, but unfortunately, fails to reduce heart disease.
Triglycerides and High Density Lipoprotein
Despite the widespread perception that ‘cholesterol is bad’ fostered by medical authorities in the 1970s, this understanding is far too simplistic. Cholesterol does not float around freely, but travels around the bloodstream bundled with lipoproteins. Standard blood tests differentiate between low-density lipoprotein (LDL) and high-density lipoprotein (HDL). When most people discuss cholesterol, they refer to the ‘bad cholesterol’ or LDL. 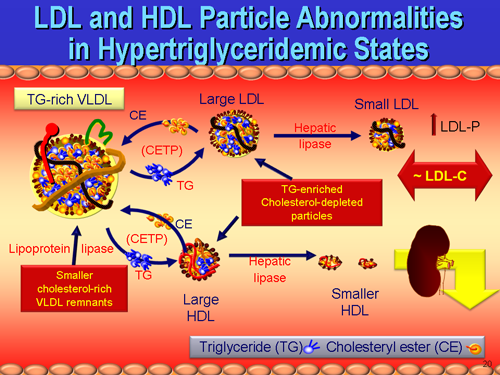 But as far back as 1951, it was already known that high HDL (the ‘good cholesterol’) levels were protective against heart disease, later confirmed by the landmark Framingham studies. Low levels of HDL are a much more powerful predictor of heart disease than high levels of LDL. HDL is believed to be the key molecule in reverse cholesterol transport, the process whereby cholesterol from the tissues is removed and returned to the liver.
Low levels of HDL are found in close association with high levels of triglycerides. Over fifty percent of patients with low HDL also have high triglycerides. High levels of triglycerides activate the enzyme cholesterol ester transfer protein (CETP). This enzyme, important in cholesterol and lipoprotein exchange, reduces HDL levels.
Given this close association with triglycerides, it should be no surprise that low carbohydrate diets raise HDL, even independent of weight loss. By contrast, the standard low-fat diet minimally affects HDL. In one study, the low carbohydrate Atkins diet raised HDL fourteen times more than the ultra-low-fat Ornish diet.
Pharmaceutical companies invested billions of dollars developing drugs that raise HDL by inhibiting CETP. Torcetrapib, at that time, the most expensive drug ever developed raised HDL just as promised, but failed to reduce heart disease. Worse, it raised the risk of heart attack and death. It was killing people. The drug dalcetrapib raised HDL an impressive 40%, but also failed to deliver any heart benefits. As with triglycerides, low HDL does not cause heart disease, but is only an indicator.
What is clear, however, is that the lipid profile typical of the metabolic syndrome, high triglycerides and low HDL results from the excess of VLDL, which ultimately stems from hyperinsulinemia.

High blood pressure, called hypertension is commonly defined as a systolic blood pressure (the top number) greater than 140 or a diastolic blood pressure greater than 90 (the bottom number). This disease is often called ‘the silent killer’ because there are no symptoms associated with it, yet it contributes heavily to the development of heart attacks and strokes. Most cases are called ‘essential hypertension’ because no specific cause can be found for its development. However, hyperinsulinemia may play a key role.
Disproportionately high plasma insulin concentration in hypertensive patients was first reported in the scientific literature more than fifty years ago. Since then, multiple studies such as the European Group Study of Insulin Resistance have confirmed this relationship. High and rising insulin levels doubled the risk of developing hypertension in those who previously had normal blood pressures. A complete review of all available studies estimates that hyperinsulinemia increases the risk of hypertension by 63%. 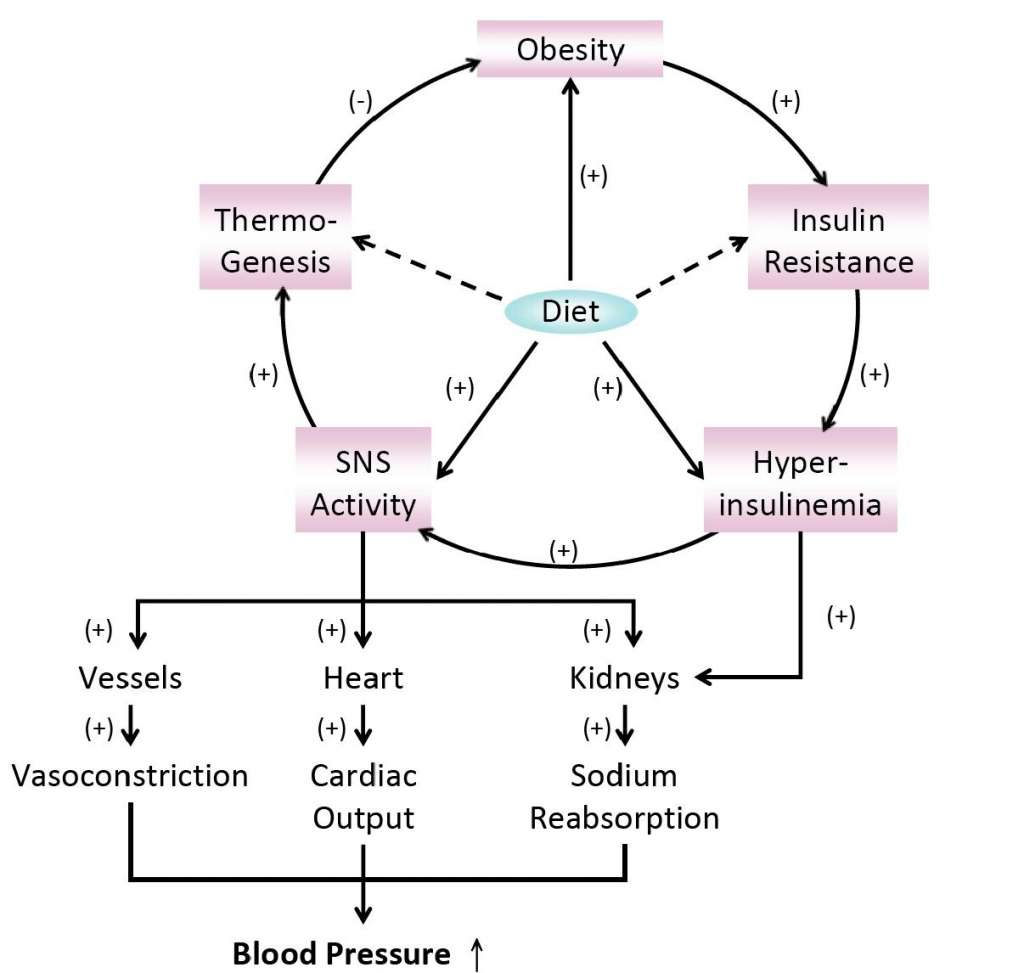 Insulin increases blood pressure through multiple mechanisms. It influence all the key determinants of blood pressure – cardiac output, blood volume and vascular tone. Insulin increases the cardiac output, the contractile force of the heart directly.
Insulin increases the volume of blood in circulation by two mechanisms. First, insulin enhances sodium reabsorption in the kidney. Secondly, insulin stimulates secretion of anti-diuretic hormone, which helps reabsorb water. Together, this salt and water retention increases blood volume and thus causes higher blood pressure.
Vascular tone, how much the blood vessels are constricted in increased by insulin by increased intracellular calcium and activation of the sympathetic nervous system.

The metabolic syndrome had been originally christened by Dr. Reaven as ‘Syndrome X’ because the symbol X is used in mathematics to denote the unknown quantity, which we are trying to find. In this case, Dr. Reaven had postulated that the various manifestations of Syndrome X all had an underlying root cause, which was then unknown. What is this mysterious X factor?
The current National Cholesterol Education Program Adult Treatment Panel III (NCEP-ATP III) criteria for the diagnosis of metabolic syndrome are:

Looking carefully at our diagram, we can now solve for the unknown ‘X’. The link between all these different diseases is hyperinsulinemia. Too much insulin causes each of abdominal obesity, high triglycerides, low HDL, high blood pressure and the high blood glucoses of type 2 diabetes.

Not every disease manifests in every person. These symptoms cluster together, but there is individual variation in which appears first. One person may have high triglycerides, another person will have high blood sugars from insulin resistance, and yet another will only have high blood pressure. But having one increases the likelihood of having the others because they all share the same root cause.
The various facets of metabolic syndrome are all expressions of hyperinsulinemia. This is crucially important. Insulin resistance does not cause the metabolic syndrome. Hyperinsulinemia causes it. The power of framing the problem in this manner is that it makes the solution immediately obvious.
We need to lower insulin.
This presents the immediate and tantalizing hope that type 2 diabetes, and indeed the entire metabolic syndrome is actually a completely reversible disease.